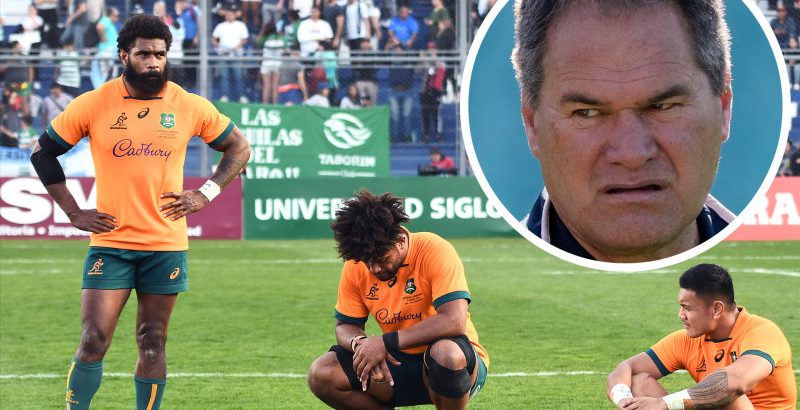 Rugby Australia’s rugby committee is in a bind. RA directors Phil Waugh, Dan Herbert and Andy Marinos are all extremely supportive of national coach Dave Rennie but, equally, they are fed up with how the Wallabies are trending and want answers.

After the almost un-Australian capitulation by the Wallabies against Argentina in San Juan on the weekend, there needs to be a no-holds-barred talk. Australia had been clawing their way back to semi-respectability this season, narrowly losing the Test series to England and beating the Pumas in Mendoza, but their meek-mannered surrender on the weekend undid everything.

Selection inconsistencies, the massive “friendly fire” injury toll, captaincy in limbo, the lack of a playmaker and the underperformance of some high-profile players – these are not issues one should be facing with games against the world champion Springboks starting in less than a fortnight. Still, there is no avoiding them.

The Wallabies have an entire side out for one reason or another and the rugby committee needs to determine whether that is simply atrocious luck or a result of systemic failure. The injuries don’t fit neatly into a single box. Some happened in training, some in matches. Some appear to be the result of over-training. Whatever the causes, they must be identified. No other team in world rugby has so many players on the sidelines.

As a result, Rennie has been forced to hand gold jerseys to players who aren’t quite ready or might never be. So why complicate matters further by choosing players out of position?

Tom Wright is an exciting, if occasionally error-prone, winger. Aside from when he was a five-eighth for the Sea Eagles in five NRL matches, he has played professional rugby only on the wing. He was chosen at fullback against the Pumas. Why? Because Australia supposedly didn’t have any fit specialist fullbacks. 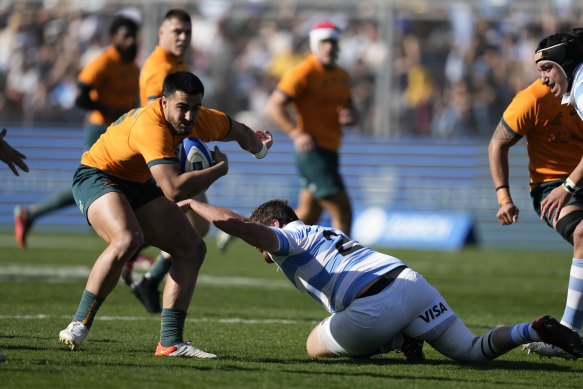 Yet they did. Why was Australia A’s Jock Campbell taken to Argentina if not to contend for the fullback spot? Instead, he was passed over as the Wallabies went with a converted winger who was terribly exposed in the last line. A chance for Campbell to make his debut – possibly off the bench behind Reece Hodge – was passed up. I’m not saying the Pumas aren’t formidable, but they are not the Springboks.

Defusing South Africa’s aerial game has to be Rennie’s number one priority. Australia were always going to face a box-kicking blitz in Adelaide on August 27 but the Wallabies’ inept performance in San Juan, where they failed to provide a protection screen for their catchers, will encourage South African kickers Cobus Reinach and Handre Pollard all the more.

Who looks like being the best under the high ball? Campbell – so, bite the bullet. While they are taking that step, the Wallabies should put a temporary halt to Jordan Petaia’s rocks-and-diamonds contribution on the wing and bring in genuine high-ball expert Suliasi Vunivalu. Surely he has not been discarded on the basis of a 90-second cameo against England in which he almost made a potential series-winning break?

Australia must accept they cannot include Quade Cooper in their World Cup plans. He may come good, he may not. Sadly, it is also time to recognise that the drawn-out experiment with James O’Connor at No.10 has failed. He had some wonderful moments but has surely run out of chances.

Keep Noah Lolesio by all means, with Hodge as a no-frills back-up five-eighth, but it is time for boldness. Resurrecting Bernard Foley provides nothing for the future. Bring in Waratahs pair Tane Edmed and Ben Donaldson, if they are seen as the best available, and Lawson Creighton as well, but do not neglect such rising talent as Warringah’s Ben Marr – a Commonwealth Games sevens rep, Tom Lynagh or the son of another past Wallaby in Joey’s Max Jorgensen.

In the forwards, the Rebels’ Pone Fa’amausili has finally become a Test tight-head. Hopefully he can put some real pressure on Taniela Tupou who, frankly, does not appear focused.

As for the captaincy, hopefully Michael Hooper will return in time for the spring tour but perhaps the moment has arrived to allow him to enjoy his rugby. The other beneficiary would be Fraser McReight, who needs the edge that only competition with Hooper could provide.

James Slipper is doing an admirable job as caretaker captain but the days of him commanding a starting role are numbered, particularly with Angus Bell expected to return any day from injury.

The problem is that no one stands out as a commanding leader. If that is the case, why not bypass the other veterans and jump straight to the next generation?

Much for the rugby committee to consider.