Brothers Sam and Joe remember kneeing and slapping each other as cheeky young lads… but now will Exeter’s smashing Simmonds siblings be the Kings of Europe?

When Joe Simmonds plonks himself down next to his brother Sam for this interview wearing his Manchester United shirt you get the feeling it is mostly to annoy his sibling.

Liverpool fan Sam, who, at 25, is two years older than Joe, spent most of his childhood trying to stick his brother back in his box.

Talking about the European Cup final can wait. Old scores need to be settled first. 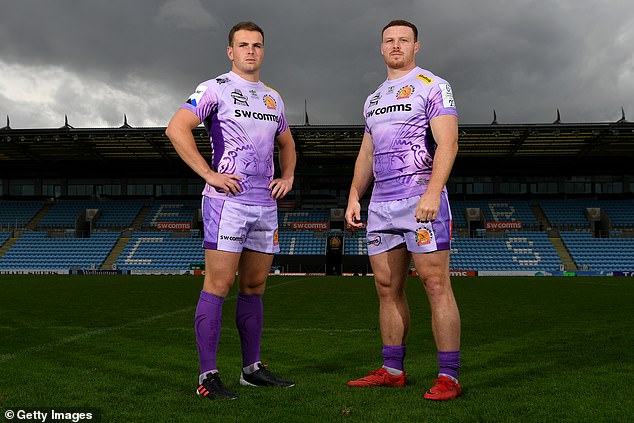 ‘One time at school…,’ Sam starts off. ‘I feel really bad about this…’

‘No, he doesn’t!’ Joe cuts in before Sam resumes bashfully.

‘In front of everyone in the lunch queue!’ Joe cries with dismay.

‘…in front of a lot of people,’ agrees Sam. ‘To put him back in line. As soon as I did it I felt bad — he couldn’t walk! He was almost crying. I regret it. It wasn’t very nice but at the time I thought, “he’s having it”. I think it was a classic case of…’

‘Sam showing off in front of everyone?’ Joe interjects.

‘No, no. Joe was trying to show me up in front of my friends. I thought I’d give him a lesson.’ 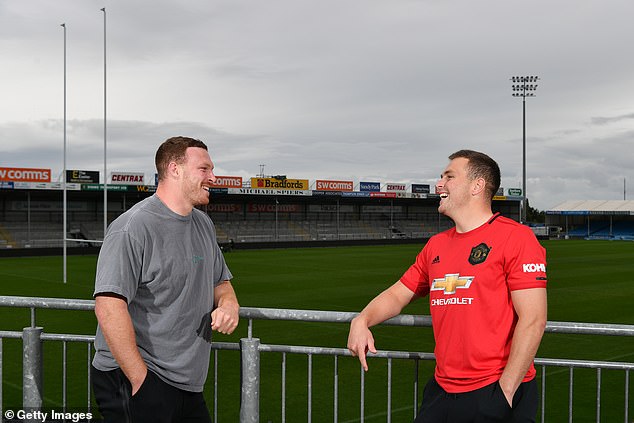 Joe was no saint, mind. ‘One time we played football and I slapped him in the face,’ he smiles mischievously. ‘The next minute he’s on top of me making me eat grass! We were competitive, weren’t we? We both loved sport.’

‘Both wanted to be the best,’ adds Sam. ‘Weekends were football for Broadmeadow STFC and rugby for Teignmouth RFC, if we could do both. They were both on Sundays so I would play rugby in the morning, 40 minutes, and then Dad took me to play football with a 1pm kick-off. I had a couple of seasons up top in football and was quite prolific.’

‘Then I slowly moved back to playing centre back at 14,’ Sam explains. ‘Playing together now probably gives us an edge. When we were younger we wanted to be better than each other but now it’s doing well for the club.’ 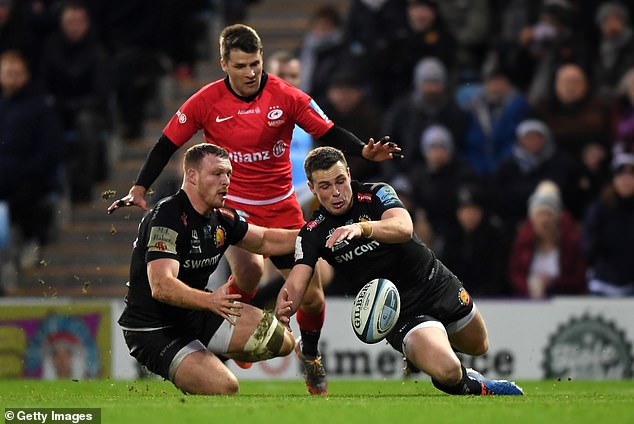 ‘We want each other to be better now,’ confirms Joe. Together the Teignmouth tyros are making waves. Sam the No 8 and Joe the Exeter captain and fly-half will run out today at Ashton Gate against Racing 92 in the Champions Cup final bursting with Devon pride.

When they can they still attend Teignmouth matches at Bitton Park where they, their dad and uncle played.

The Simmonds brothers are quickly becoming the town’s most famous sons. Maybe sealing the Premiership and European Cup double would put them above three members of rock band Muse and Charles Babbage, the 19th century polymath seen by many as the ‘father of the computer’, on the ‘notable people’ section of Teignmouth’s Wikipedia page.

It was not long ago they finally left home. Both lived with their mother Nicola on the coast until last year. Now, on separate sides of Exeter, it is easier to get along. 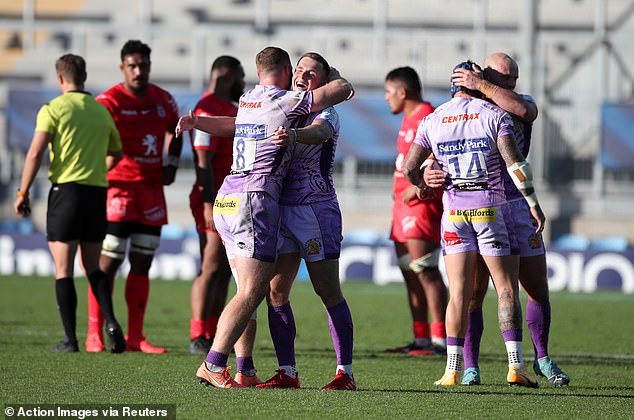 ‘It was tough living together,’ Sam picks up. ‘We would drive in to the club together but not speak much. I think our relationship is better now — we don’t argue nearly as much.’

Ahead of the most significant fortnight in Exeter’s history, with the two trophies on the line on consecutive Saturdays, it would be understandable if these local Chiefs felt the pressure.

When the European Cup started in 1996, the year Joe was born, the club was in Courage League Division 4 playing Clifton, Redruth, Havant and Aspatria.

Fourteen years and four promotions later the brothers were there to watch Exeter seal a fifth leap, up to the Premiership after a play-off victory over Bristol in 2010.

‘We watched a lot of Exeter playing in the Championship,’ Joe explains. ‘Looking back I wouldn’t have thought I’d be playing in these big games. It’s a credit to the coaches and who they’ve brought in but also the culture of the club. We’re all like a family.’ 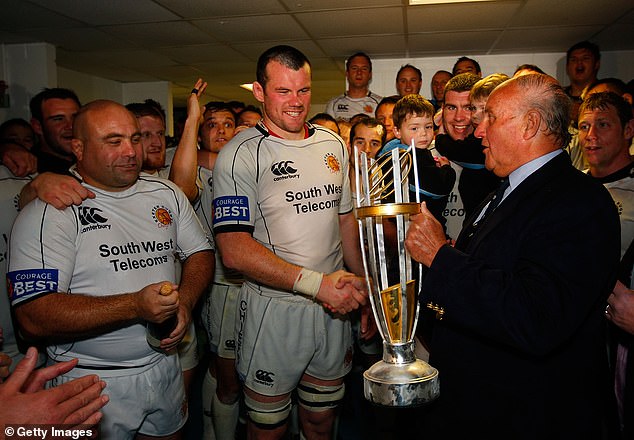 A largely homegrown one too. The team that beat Toulouse in the semi-final included eight starters from Devon and Cornwall. But having suffered the heart-ache of losing three league finals to a Saracens side they feel cheated them out of titles, these Chiefs are no wide-eyed wanderers any more.

‘A couple of years ago it would have been a dream to just make the final,’ says Sam. ‘But I think I speak for everyone that the dream is to win the European Cup and the Premiership. If you’re just happy to get to finals you’re doing something wrong. That hurt from losing Premiership finals has stuck with us. We’re a better team now, have moved on and everything is driving towards winning.

‘Before rewards came playing for a loan club in the Championship or National One, or playing for Exeter in LV Cup games, now it’s European Cup finals, Premiership finals. It’s what dreams are made of, I guess, but the bigger dream is winning it.’

And now the pair have stopped their sibling scraps they are able to talk openly about their love for each other and joy to be doing this together. Sam is up for European Player of the Year, having missed most of the previous season with a horrendous knee injury, and Joe is desperate for him to win it. 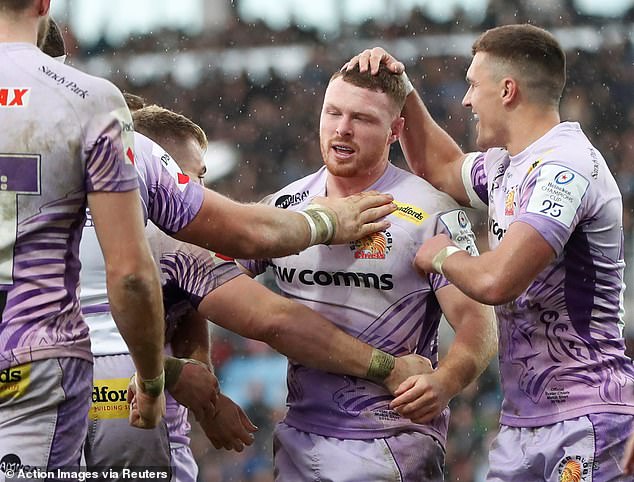 ‘He deserves it,’ Joe adds. ‘He’s the best player I’ve seen play. It’s a testament to him. He was in a bad way with his injury a year or so ago but he’s probably playing the best rugby he’s ever played now. I’m glad I’m not playing against him.’

Sam returns the compliment. ‘I was very proud of the first time we took the pitch together,’ he says. ‘To be able to play with a sibling is the best feeling. Although you’ve got mates and team-mates around, the feeling of playing with someone with the same blood is just amazing.

‘I’m very proud of him leading out Exeter. It’s nuts. Hopefully he can lift two cups for us this year.’