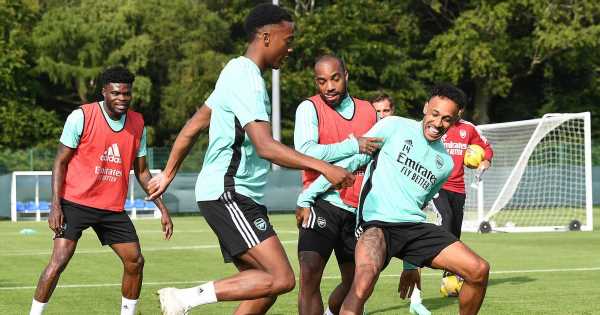 Arsenal players are back to work with Mikel Arteta putting them through rigorous fitness programmes to get them ready for the new season.

Many are still on holiday as they take an extended break following a gruelling campaign and the Euro 2020 tournament.

They include Bukayo Saka, Granit Xhaka and Kieran Tierney, while the Gunners are in action tonight against Hibernian.

It is part of Arsenal's pre-season training camp in Scotland with Covid keeping them from travelling abroad, with a match against Rangers at Ibrox to follow.

But with pictures emerging of the squad, here are five things we noticed from Arsenal's latest session.

Arsenal have wasted no time bringing in their new signing Nuno Tavares, who signed from Benfica for £7m.

The left-back is expected to largely play back-up to Tierney as Sead Kolasinac looks set to leave over the coming weeks.

But with the Scotsman's injury record, the 21-year-old might get more chances than he hoped for and Arteta wants to see him in action as soon as possible.

Getting a deal done quickly was important as the Gunners coach looks to utilise him over the next two friendlies.

Arsenal have had problems going forward when they scored just 55 goals in the Premier League last season with Alexandre Lacazette and Pierre-Emerick Aubameyang struggling.

It led to calls that Balogun should be incorporated into the side after netting for fun for the reserves.

And after signing a new contract in April, it is expected that the striker will take on more of a key role in the squad.

A subtle number change has hinted towards that, too, changing his usual 38 to 26.

The two strikers did not have the best of times last season as the Gunners finished eighth in the Premier League.

However, the duo remain inseparable and are close pals – despite speculation over the futures at the club.

If they do stay over the summer, seeing the pair joking and smiling together can only be a good thing.

Aston Villa are desperate to sign Smith Rowe as he continues negotiating a new contract with Arsenal.

One of the major persuading arguments the Gunners have is that they will award the 20-year-old the No. 10 shirt – an iconic nunber of any playmaker.

And a clue has been revealed over those contract talks progressing well with another player taking his old number.

Rookie goalkeeper James Hillson was spotted donning the No. 32 shirt – indicating that Smith Rowe has got his wish.

Arteta's still got it

For the Arsenal coach, it was a good chance to see his team altogether once again while questions remain over his ability to take the Gunners forward.

But today was one of positivity and an opportunity to start again and correct the mistakes made over the past 12 months.

And the Spaniard still has a decent touch on him, getting involved in training where possible and proving that his ability has not left him behind despite his transition to the dugout.

Indeed, at 39, Arteta could probably come out of retirement and teach some of his players a thing or two on the pitch.