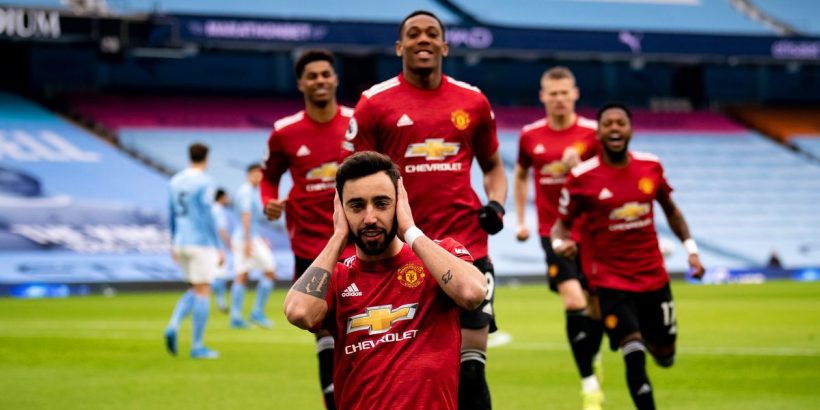 Manchester United’s transfer success rate has been hit-and-miss in recent times, but the club struck gold when they completed the £47million signing of Bruno Fernandes last year.

The Portugal international moved to Old Trafford from Sporting CP in January 2020, signed as an alternative to Leicester playmaker James Maddison after he was linked with his own move to Manchester.

Fernandes wasted no time developing cult status in England, proving his place as the superior selection for a number of reasons.

United host Leicester in the Premier League on Tuesday when both architects will look to prove they have the blueprints to success, with the Foxes still yet to secure a top-four finish. Being able to play 50 games or more per season is a mark of the elite, and the fact Fernandes is yet to miss a game for United due to injury speaks volumes of the player’s conditioning.

The 26-year-old has already played 54 times this term and featured prominently throughout a demanding campaign, with no signs of letting up entering United’s final five fixtures.

In fact, this will be the fourth consecutive season in which Fernandes has played 50 games or more across all competitions, making him even more valuable as he enters his prime. By contrast, Maddison has missed 11 games for Leicester this season alone due to a variety of injuries and illnesses, including issues with his knee, hip and hamstring.

The player is at a disadvantage given his clubs to date haven’t featured in European competition, but Maddison’s 49 outings with Norwich in 2017/18 is the closest he’s come to a 50-game campaign.

Having the talent to make an impact for one’s team is a commodity, but being consistently available to demonstrate that effect is a desirable trait of its own in the fast pace of the Premier League.

Numbers speak for themselves

Speaking of consistency, Fernandes’ productivity in attack for United is perhaps the most pertinent factor backing him up as the right choice over Maddison.

The former Sporting star has scored 39 goals and recorded 25 assists in 76 total appearances so so far at United—an average of 0.84 direct goal involvements per game.

That figure drops to 0.67 goals and assists per 90 minutes if we remove penalties from the equation, given it’s Jamie Vardy who usually takes spot-kicks for Brendan Rodgers’ side.

Nonetheless, Maddison still comes off second-best by a wide margin in the time since Fernandes moved to Old Trafford, averaging 0.44 goals or assists per 90 over the same period.

The Leicester star deserves some slack having only recently returned from injury, but his current drought of five Premier League appearances without a goal or assist is his longest of the season.

Maddison previously went 11 straight league games without a direct goal involvement last season, whereas Fernandes has yet to go more than three since joining United.

Moving to a new country is often considered a major stumbling block for many stars from the continent, but growing pains in the Premier League were never a concern for Fernandes.

The Portuguese made his United debut in a 0-0 stalemate with Wolverhampton Wanderers. However, it wasn’t long before he went about cementing his spot as a fan favourite, recording seven goals and seven assists in his following 10 appearances in England’s top flight.

That haul broke Robin van Persie’s previous record of 12 direct goal involvements in his first 11 appearances for United. Other iconic transfers like Eric Cantona and Dwight Yorke each had 11 goals and assists in the same span.

Coventry-born Maddison may have the edge in familiarity after Leicester recruited him from Norwich City in 2018, but the speed with which Fernandes adapted put even most natives to shame.

Money talks more than ever in the Premier League, and the longer Fernandes impresses at Old Trafford, the more his £47million price-tag looks like a steal for his employers.

The Portuguese has worked out so well, in fact, that many have suggested Fernandes could be United’s best signing of the post-Sir Alex Ferguson era, both in terms of output and value.

Maddison, 24, has one advantage of being a few years younger than his Old Trafford counterpart, but it’s likely the ‘English premium’ would have meant Leicester demanded an even higher fee. The Foxes paid Norwich £20million to sign the playmaker in 2018. It was reported at the beginning of January 2020—shortly before Fernandes left Lisbon—that United were willing to offer Leicester £45million-plus Jesse Lingard in order to sign Maddison.

While their ultimate selection may not count towards the homegrown player quota, United can afford to feel confident they made the more cost-effective pick.

Not only does his fee look better in hindsight, but Fernandes’ contract is also settled for the time being, with his five-and-a-half-year deal not due to expire until June 2025 (with the option of an extra year).

Fired-up Fernandes a leader on and off the field

Although his attack-heavy performances for Sporting might have painted the puppeteer as an out-and-out No. 10, Fernandes has exhibited rare passion to muck in among United’s midfield.

The 27-cap Portugal international has quickly risen to become a leader at Old Trafford. He’s even donned the captain’s armband on several occasions this season—once in the Champions League against Paris Saint-Germain and again facing Real Sociedad in the Europa League.

A leaked WhatsApp voice note from his time at Sporting showcased Fernandes’ passion for winning, and the midfielder told The Guardian “losing is not normal” for him.

The player has also formed a habit in coming up with important goals at United, scoring against the likes of PSG, Manchester City and Liverpool this season alone.

That’s not to say the England international doesn’t lift the Leicester dressing room in his own way, but Fernandes’ focus on winning at all costs makes him the more natural leader.