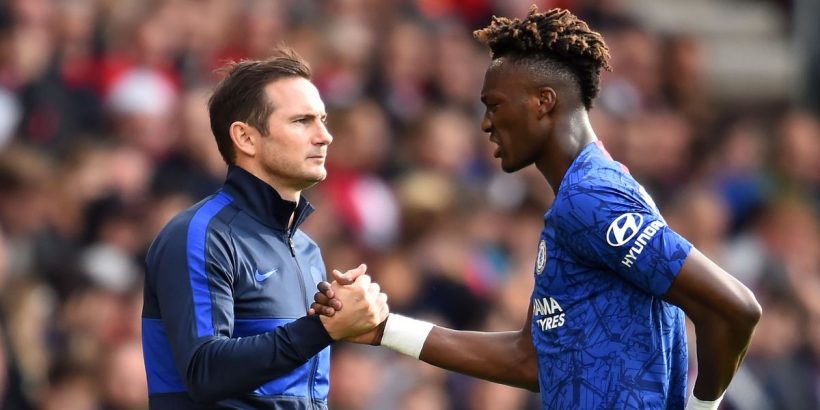 Frank Lampard could raid Chelsea if he becomes the next Crystal Palace manager – and it would boost Thomas Tuchel's transfer kitty.

Lampard has emerged as a leading candidate for the Selhurst Park hotseat should the Eagles decide to part company with Roy Hodgson at the end of this season.

If he does take charge he will need to bring in new players, with 11 Palace players out of contract this summer.

And the 42-year-old will no doubt have his eye on a few of his former Chelsea favourites, with Tuchel also set to overhaul his squad in the transfer window as he eyes a Premier League title challenge next term.

Here, Daily Star Sport looks at some of the players Lampard could target.

First on Lampard's wishlist would no doubt be Mason Mount, but he would have no chance of prising the England midfielder away from Stamford Bridge.

Tammy Abraham could be a close second, with the striker having risen to prominence at Chelsea under the club's record goalscorer.

Abraham was handed the No9 shirt by Lampard last season and went to be the club's top goalscorer with 17 in all competitions, becoming an England international in the process.

He also played under Lampard on loan at Derby County, but has been out of favour under Tuchel and has been linked with a move to Aston Villa this summer.

With Palace having scored just 37 goals in the Premier League this season, the 23-year-old would be a useful acquisition for the Eagles and could net Chelsea around £40m to put towards the likes of Erling Haaland or Romelu Lukaku.

Lampard could also move for Billy Gilmour if he were to take charge of Palace, although it would likely be on a season-long loan.

The 19-year-old midfielder made his Chelsea breakthrough under Lampard last season, and impressed towards the end of the campaign before suffering a knee injury which kept him out until November.

He has found first-team chances harder to come by under Tuchel, although he has had more starts recently with Chelsea competing on three fronts.

Tuchel may take the view that the teenager would benefit from more regular action at another club rather than competing with the likes of N'Golo Kante, Jorginho and Mateo Kovacic.

Palace are in need of midfield reinforcements, and a loan move for Gilmour would free up space on the wage bill for another summer arrival.

Barkley is another Chelsea player who could strengthen Palace's engine room – and he could leave Stamford Bridge on a permanent move this summer.

The 27-year-old excelled early in the season while on loan at Aston Villa, but injury curtailed his progress and Dean Smith said recently there had been no talks over a permanent switch.

Like Gilmour, Barkley is likely to find it tough earning a place in Chelsea's midfielder, but unlike the youngster he does not have time on his side.

With his Chelsea contract set to expire in 2023, this summer would be the perfect time for the club to cash in – and a move to Palace could offer him the perfect chance to fulfil the huge promise he showed early in his career at Everton.

Kurt Zouma was Lampard's preferred centre-back partner for Thiago Silva at the start of this season, with the manager having kept him at Stamford Bridge last term following his loan to Everton the previous campaign.

The 26-year-old has also featured fairly regularly under Tuchel – although he didn't get his chance until Thiago was sidelined by injury.

Tuchel is expected to target a top-class centre-back in the summer transfer window, and that could encourage Lampard to move for Zouma if he were to take charge at Palace, with the defender likely to bring in around £30m.

One of Chelsea's most highly-rated youngsters, attacking midfielder Anjorin has scored four goals and posted four assists in 10 games for the under-23s this season.

The 19-year-old could benefit from going out on loan next season – especially if it's under the tutelage of Chelsea's all-time record goalscorer Lampard.

Right-footed Anjorin can play as a No10, in central midfield or on the flanks, but would face tough competition to get into the first team at Stamford Bridge.

But regular exposure to Premier League action at a club like Palace could be a boon to all parties. Victor Moses began his career at Palace, playing 69 games for the Eagles before joining Wigan in 2010 – and he could finally end his Chelsea limbo this summer.

Moses has spent the season on loan at Spartak Moscow, who have an option to buy the 30-year-old as he enters the final year of his Stamford Bridge contract in July.

According to Goal, Spartak are obliged to sign the versatile wideman for £4m should they qualify for the Champions League, which they have all but achieved.

But if that doesn't happen, Lampard could be in position to land a bargain signing with plenty of Premier League experience and a title-winners' medal in his trophy cabinet.

Tomori has impressed sine moving to the San Siro in January, and a £25m move looks to be on the cards.

The 23-year-old is another player to have made his Chelsea breakthrough under Lampard, having been Derby's player of the season when he played under the manager on loan at Pride Park.

Tomori excelled early on last season, resulting in an England call-up, but was axed by Lampard later in the campaign.

He played just 45 minutes in the Premier League this term before joining Milan on loan in January, and if for any reason the move to Milan doesn't come off, it would be interesting to see whether his former boss would seek a reunion.

READ MORE: Two things Thomas Tuchel got wrong and one he got right in Chelsea defeat vs Arsenal