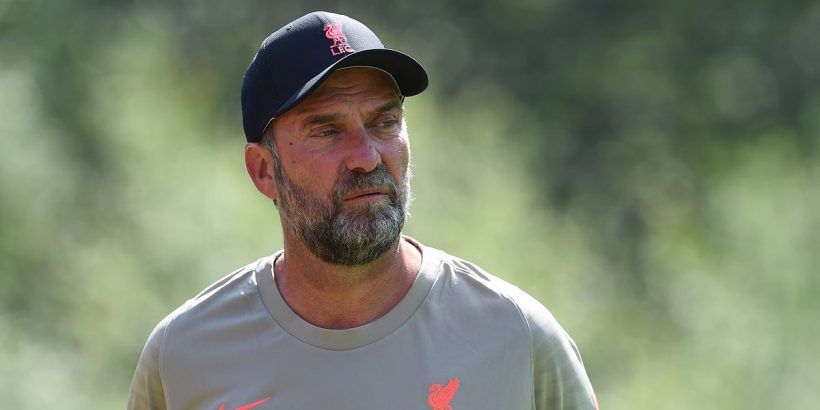 As if trying to close the gap to champions Manchester City wasn’t already difficult enough, Liverpool are facing an agonising three weeks of transfer dealings ahead of them.

Jurgen Klopp swooped to sign Ibrahima Konate from RB Leipzig for £35million early in the summer transfer window as they prepare to launch a title assault on the Manchester clubs and possibly Chelsea.

But first, Klopp and his recruitment staff have some administration matters to attend to which could derail their plans for a summer spree.

Once the summer transfer window deadline has passed, Premier League clubs must submit a squad of up to 25 players aged 21 and over, of which no more than 17 can be classified as “non-homegrown”.

The Reds currently have a total of 18 non-homegrown players on their books, which poses a problem for the Merseyside club with less than a month to go before the start of the new campaign.

It is perhaps the reason for why their proposed transfer moves for Saul Niguez, Florian Neuhaus and Youri Tielemans have all failed to materialise over the past weeks.

To meet this criteria, Liverpool must offload players that fit into this category, which could include fringe players Takumi Minamino, Xherdan Shaqiri, Divock Origi and Loris Karius heading for the exit.

Liverpool would have to sell or loan out at least two of their non-homegrown players to sign Saul — and that is why Klopp could look more locally to solve his transfer problem.

Bowen’s sharp rise from his days playing in the Championship for Hull City have seen him tracked by Gareth Southgate — and Klopp too, according to The Liverpool Echo.

The winger scored eight goals in the Premier League for West Ham last season and also registered five assists, putting him in the top bracket of most creative wingers in the top-flight.

It is no surprise to see why Klopp has taken a shine to him, as his energetic bursts down the right flank proved crucial for the Hammers as they secured Europa League football for the upcoming season.

David Moyes will be desperate to hang onto the 25-year-old and the east London outfit are apparently reluctant to sell, meaning Liverpool may have to bid somewhere in the region of £35m to convince them to open talks.

Who do you think Liverpool should sign this summer? Let us know in the comments section.

Unlike the other players on this list, Ings will know exactly what he is in for if Liverpool make an approach to sign him this summer.

The Southampton striker has bagged 46 goals in 100 appearances for the club since arriving in a £20m deal from the Reds in 2018, having endured a frustrating injury-hit spell at Anfield.

But it seems the 29-year-old has shrugged off his injury problems with the Saints and has emerged as one of the Premier League’s most clinical operators in front of goal.

With Roberto Firmino struggling for form last season, he could be an ideal option to bring off the bench.

It is believed Ings has refused to extend his deal and with his contract entering its final year, Liverpool could negotiate a cut-price fee to snap him up again, although they may face competition from Tottenham.

The issue for Liverpool in recruiting a central midfielder to replace Georginio Wijnaldum is that it will leave a burning hole in their proverbial pockets.

If Saul was viewed as an expensive acquisition at £40m, it would likely take a bid of at least twice that amount to lure Rice from West Ham this summer, such is his importance to the club.

The England international produced some excellent performances at Euro 2020 to follow up a fantastic domestic campaign where he made 32 appearances, scoring twice.

The sales of Shaqiri, Origi and Minamino could soften the blow to their transfer fund. But with interest from Chelsea and Manchester United in Rice, and the sheer cost, the difficulty in pulling off such a deal may force Klopp and recruitment chief Michael Edwards to look elsewhere.

Given his stellar displays at Euro 2020 and his exploits in the engine room for Marcelo Bielsa’s Leeds side, it is surprising that no ‘big-six’ club has made signing Phillips a priority.

The 25-year-old represents the perfect all-action midfielder, being able to link defence and attack as well as snuffing out attacks with his excellent ability to intercept passes.

Some would argue that Liverpool already have one of the best midfield generals in the world in Fabinho and may need to add more creativity to their ranks.

But adding Phillips to their squad would do their chances of challenging for the title no harm whatsoever. Leeds would be determined to hold onto their prized asset, however, so a bid north of £50m may be required.

Liverpool will need to find a way to replace Wijnaldum’s creativity in their midfield three and one candidate could be Leicester playmaker James Maddison.

The 24-year-old has seen his form take a slight dip over the past 12 months, despite scoring eight goals in the Premier League last season, and off-the-field issues have seen him fall foul of Foxes' boss Brendan Rodgers.

He is no longer viewed as an integral member of the Leicester starting XI and that could work in Liverpool’s favour, with a £40m bid perhaps enough to force their hand.

Working with Klopp could be exactly what the talented midfielder needs to get his career back on track, having missed out on England’s Euro 2020 squad.

It looks increasingly likely that Abraham will depart Chelsea this summer after falling out of favour under Thomas Tuchel, which makes him an attractive option for Premier League sides.

At 23, the towering striker has his whole career ahead of him and there is a feeling that his potential is some way from being fulfilled.

Chelsea look set to cash in on Abraham with only two years left on his contract and Arsenal are frontrunners to secure his signature, with a £35m fee mentioned to seal the agreement.

But if Liverpool were to shown an interest, the opportunity to join a team in Europe and likely to boost his England prospects could give the Reds the advantage if they are interested in joining the race.

"He's an exceptional player. The work-rate is outstanding, and he still plays the football he plays on top of that, and scores goals. That's rare.”

Those were Klopp's words of glowing praise for Bamford ahead of their clash with Leeds in April, and naturally the German waxing lyrical about the striker prompted suggestions that he could move for him this summer.

No bid has surfaced at the time of writing but with the 27-year-old bagging 17 goals and seven assists in his 37 appearances last season, he would represent a sensible addition to Liverpool’s devastating frontline.

The only question is whether Bielsa would be willing to part with his lead frontman, with Leeds likely to demand a huge fee for their top goalscorer.

Do you want an exclusive pre-season preview of YOUR club – both in your inbox and through your letterbox? Head over here to find out more and secure your copy.