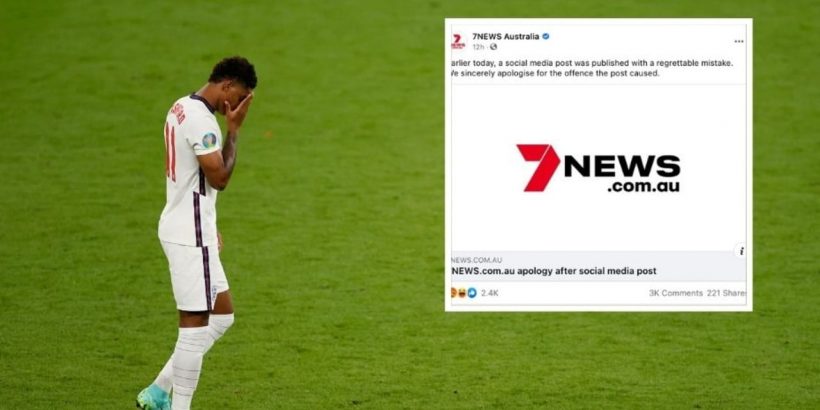 7 News has gone into damage control after it posted a racist caption to one of its articles on social media yesterday.

The website came under fire after a Facebook post of its story slamming racism directed at England players following the Euro 2020 final was branded racist itself.

The final between England and Italy went right down to the wire with the match — and the competition — decided in a penalty shootout.

But English stars Marcus Rashford, Bukayo Saka and Jadon Sancho, each who missed their penalty shots, were targeted by a torrent of disgusting threats and abuse online in the wild 3-2 result.

The trio had vile comments left on Instagram and were sent monkey emojis, prompting a strong response from the Football Association.

Rashford and Sancho were left particularly exposed when they were subbed on in the final minutes of extra time by manager Gareth Southgate — specifically so they could be used in the penalty shootout.

The gamble backfired for Southgate with both players missing from the spot and when 19-year-old Saka had his shot saved, it was game over for England.

The FA said it was “appalled” and “disgusted” by the online abuse.

Marcus Rashford was distraught after missing his shot in the penalty shoot out. (Photo by John Sibley – Pool/Getty Images)Source:Getty Images

“We’re disgusted that some of our squad — who have given everything for the shirt this summer — have been subjected to discriminatory abuse online after tonight’s game,” the England FA tweeted.

“We stand with our players.”

London’s Metropolitan Police said it was investigating the “offensive and racist” posts.

The post read “Three Black players failed in the penalty shootout which England lost 3-2 against Italy”.

In images shared to social media, the post was edited over an hour after it was shared, while it was eventually deleted hours later, with screenshots circulating across social media.

“Earlier on Monday, a 7NEWS.com.au social media post was published with a regrettable mistake,” the statement read.

“The post linked to an article condemning the racial abuse of England football players following the team’s loss to Italy in Sunday’s Euro 2020 final.

“The caption on the post was swiftly rectified as soon as it was identified.

“We sincerely apologise for the offence the post caused.”

Seven CEO James Warbuton has now sought to address the issue in an internal email circulated to staff.

“I wanted to touch on the post that was published on 7news.com.au yesterday and to reiterate that what happened was a terrible mistake, unacceptable and will not be tolerated,” he wrote.

“A public apology was issued as soon as possible.

“The post was inexcusable, embarrassing and clearly does not meet the expectations of our company and the values that we’ve all worked so hard on over the past 12 months.”

But people weren’t satisfied with 7 News’ apology as readers took to social media to vent their anger.

“Not good enough!,” one person commented on 7 News’ apology post.

The original post from 7 News was slammed as racist.Source:Facebook

“You have not addressed how this kind of headline was thought to be acceptable by your organisation until you started to get called out on it!”

“My four year old could say a better apology than this. You should be ashamed of yourself,” another wrote.

“Pathetic … and you’ve only realised your error because of the backlash. Not because you understand the endemic issues you perpetuate.”

The condemnation of the apology continued: “Your earlier post aligned failure and shame with a persons skin colour and it is unacceptable.

“The detriment that racism has plagued on people of colour for generations is harmful and this “apology” post was a waste of your resources and everyone’s time.”

The original post was slammed on Monday, with ABC comedian Charlie Pickering writing: “Hey @7NewsAustralia — what the f*** is with this headline? Have you lost your actual mind? And how has the person who wrote it been counselled?”

With racism a rising social scourge in Australia, on online platforms & athletes subject to vile abuse after #Euro2020Final + here in Australia, to see this from a major network in Australia is beyond disgusting. Reprehensible. There needs to be a public apology @7NewsAustraliapic.twitter.com/KXluoT6ZBb

It’s 2021 @7NewsAustralia get your house in order. This headline is disgraceful. pic.twitter.com/h4aJqPH5Th

British Labour politician David Lammy also took to Twitter, using the 7 News post along with other social media posts as an example of “why we take the knee”.

England discussed before the tournament whether they would take a knee, a gesture to highlight and challenge discrimination of any form which gained traction following the Black Lives Matter protests in 2020.

England had taken a knee at each match they have played since the murder of George Floyd last year and were booed earlier in the tournament for the act.

“Praying for a better future – worthy of the values, beauty and respect exemplified by every single England player,” Lammy wrote.

This is why we take the knee. Praying for a better future – worthy of the values, beauty and respect exemplified by every single England player. pic.twitter.com/uuWYVnAmYp