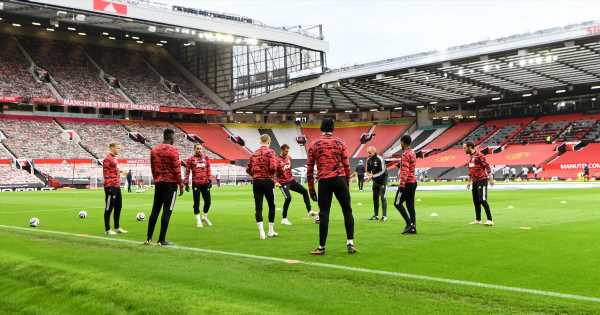 Manchester United’s early arrival at Old Trafford ahead of taking on Liverpool was not the most unusual pre-match routine in football.

The Red Devils arrived at their ground six hours early before losing 4-2 against their rivals, instead of meeting at the Lowry Hotel before heading to the stadium.

This was forced by fans continuing to protest against the club’s American owners the Glazers, calling on supporters to surround the venue again.

In the modern game where top-flight players are treated like royalty, Ole Gunnar Solskjaer’s decision made for an unusual pre-match.

The United, Real Madrid and Juventus forward may have consistently found the goal in his career but he requires a fresh haircut for each game.

And the five-time Ballon d’Or winner has to show it off, making sure he is always the first player to step on the pitch.

It is the polar opposite to former Arsenal, Liverpool and Manchester City star Kolo Toure, whose insistence on being the last player to step out saw him nearly miss starting the second half of a Champions League clash.

Throwing salt over your shoulder has been regarded as a sign of good luck for centuries.

But Pisa president Anconentani took this to an extreme level, throwing the stuff on the pitch before every game.

The defender was at the heart of the French side that won their own World Cup in 1998, eventually beating Brazil 3-0.

But the United hero had a trick of his own to his own, kissing goalkeeper Fabian Barthez’s bald head before every tournament fixture… which seemed to work!

Jamie Vardy may enjoy an unusual pre-match diet of Red Bull but he is joined by United’s all-time top scorer with alternative calorie intake.

Premier League diets are now made up of high-protein, low-fat foods including chicken and fish – but the Englishman enjoyed a bowl of Coco Pops before games.

The Derby manager told FourFourTwo in 2010: “I tend to have just a bowl of coco pops. The normal ones, not the moons and the stars.

"I tend to just have cereal before a game, probably a bowl of Coco Pops. The normal ones, not the Moons and Stars.”

One of the most passionate personalities in world football, the German is praised for his approach to the club’s historic traditions.

This includes him touching the ‘This is Anfield’ sign above the tunnel before every home game – but it was not always the case.

Klopp said he would not touch the sign until he had won a major trophy with Liverpool, which came in 2019 in the Champions League final.

And it came after a previous visit with a former side, saying: “I touched it while I was at Dortmund. I played here in a friendly and we lost 5-0.”

Some players get motivated for games with inspirational sporting movies.

But the former MK Dons, Cardiff City and Huddersfield watched Willy Wonka and the Chocolate Factory before every game.

Kamara “said: I have to watch it before every game. It gets me in the right mood. It's been my favourite film since I was little – it calms my nerves and gives me luck."

The Match of the Day host scored more than 300 goals for club and country during his time on the pitch.

But Lineker never attempted a strike at the net during the warm-ups for a match, claiming he did not want to “waste” the goal.

The Dutchman’s style of football is regarded as the spark for the modern game, having won titles at Ajax and Barcelona as a player and manager.

While the forward was able to change a game on his own, he required former team-mate Gert Bals for a pre-match ritual which involved slapping the goalkeeper on the stomach.

And Cruyff could not start a game unless he spat a piece of chewing gum into the opposition half, admitting in 1972: “It’s odd I know, but it seems to work for me.

“Once I’ve gone through with my little system before the game, my mind is fully focused on what we have to do to be successful on the pitch."