If there was some unease at Sheffield United paying £18.5m for a goalkeeper they had allowed to leave for a fraction of that fee only three years earlier, that feeling was offset by the belief in Aaron Ramsdale’s capabilities. The fear now, with Chris Wilder’s side bottom of the Premier League table, is that they needed him to be much more than just capable.

Ramsdale is still waiting for his first clean sheet of the season and scrutiny is starting to come his way after his role in the 4-1 defeat to Chelsea at Stamford Bridge on Saturday.

The first goal conceded was a mishit effort by Tammy Abraham that squirmed beyond his outstretched right hand. The second was a cross from Hakim Ziyech that travelled an awful long way in the air only for Ben Chilwell to bundle into the Blades net from close range. 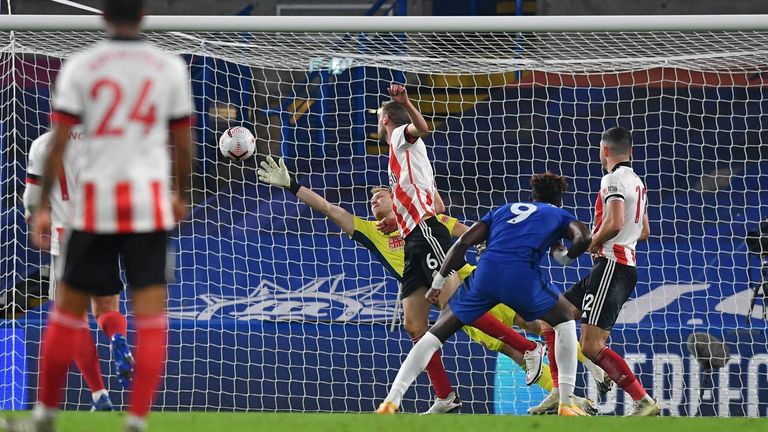 “He is a young goalkeeper and it is certainly not easy to come in after Henderson did so well last season. It cannot have been easy for him last season at Bournemouth also. But it is high stakes, particularly in the situation that Sheffield United find themselves in.” 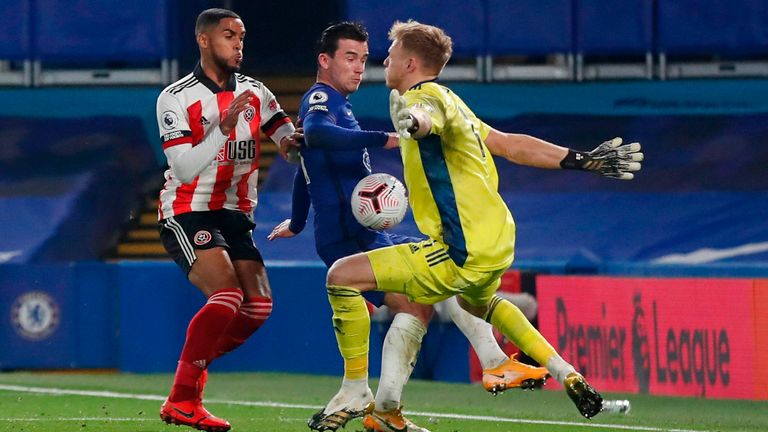 Wilder's view on the second goal

“It’s a mistake, which in an individual mistake. If Aaron doesn’t deal with it then Max should deal with it, whatever you have to do to keep the ball out of the net and we didn’t. It’s a scruffy goal from our point of view and one that should have been dealt with quite easily.”

Dean Henderson. It is the name that stalks Ramsdale’s every move right now. In one sense, what came before is a complete irrelevance. In another, it strikes at the heart of the problems that Sheffield United are now facing as they seek to build on the impressive accomplishment of last season’s top-half finish, the club’s best in almost three decades.

Ramsdale is not living up to the performances of his predecessor.

Henderson was excellent last season, making crucial saves, keeping his team in games. His natural confidence set the tone for a team that exuded a steely mentality befitting the city.

There was the left-handed save from Bournemouth’s Philip Billing on the opening weekend. The Abraham shot that he kept out low down to his right, managing to shovel it out of the path of Mason Mount against Chelsea. The close-range headers from Watford’s Craig Dawson and Wolves striker Raul Jimenez. The long-range shot from Spurs’ Lucas Moura.

There was the fingertip save from Todd Cantwell and the strong palm to keep out Ryan Fraser’s powerful hit. Granit Xhaka’s thunderbolt from distance. Mario Lanzini’s free-kick for West Ham that beat the wall but not the goalkeeper. Perhaps most spectacularly of all, there was the double save from Mario Vrancic and Josip Drmic to somehow deny Norwich.

Sheffield United won each of those matches by just one goal.

Take out those Henderson stops and that is 15 fewer points.

If that is stretching the point, the expected-goals model does provide some statistical insight that allows us to understand the true significance of Henderson’s impact last season.

Based on the locations from which the shots against him were taken, the type of shots that he faced, and where on the goal they were struck, the average goalkeeper would have been expected to concede 41 goals from the shots that were faced.

Sheffield United would still have had a good defensive record without this remarkable overperformance but they would not have finished in the top half. Not when they were outscored by relegated Bournemouth. Being so tight at the back was the basis of it all.

He might have done better with Romain Saiss’ header for Wolves on the opening weekend, and the same could be said of Ezri Konsa’s header that crept in at the far post in the defeat to Aston Villa.

And yet, the stats show that Ramsdale has not been the problem. Wilder will know that and he will demand much more from his team than they showed in conceding four against Chelsea.

The problem is that nor, it seems, is he the answer, the man who is going to save them if they suffer. All the evidence suggests that he is unlikely to reproduce the heroics of Henderson.

That means Sheffield United were always going to need improve ahead of him if they were to avoid a much more difficult season.

The early signs are not promising.