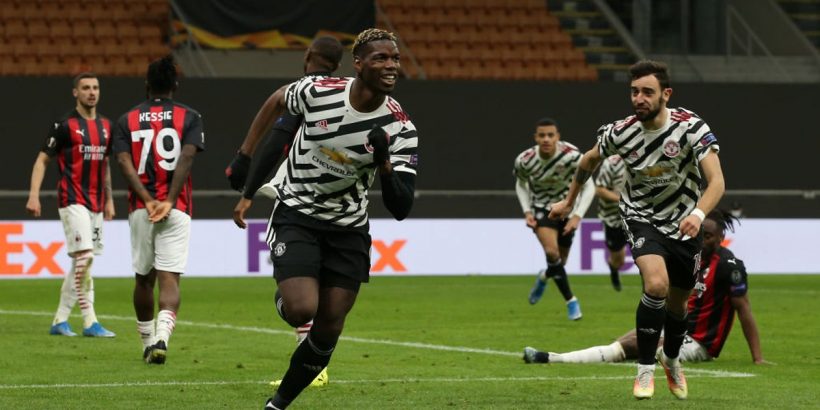 Bruno Fernandes sent the first real opening of a tight start to the game well over the crossbar, while Samu Castillejo spurned a good three-on-two chance on the counter after Fernandes had lost possession in midfield.

Milan had a further decent chance just before the break, Alexis Saelemaekers seeing a drive saved by Dean Henderson, but it was a half-time sub from United – Paul Pogba on for Marcus Rashford – which proved pivotal.

Within minutes of the restart, Pogba had cleverly flicked into the net at the near post, with Milan then not threatening until Zlatan Ibrahimovic made his entrance off the bench. The Swede forced Henderson into a smart save from a header and, despite a late barrage of high balls into the box, a game low on final-third quality was settled by the solitary goal.

Here are five things we learned from the second leg at the San Siro.

Left-backs fizzle, but don’t quite fire

Unusually, the two most impressive outlets for these two sides for much of this season have both come from left-back.

Theo Hernandez was incredible in the first half of the campaign, Milan’s real counter-attack threat, creative runner and chance creator, though has suffered an injury of late.

Luke Shaw, meanwhile, has been United’s best player by a distance for the past few months, defending aggressively and attacking with plenty of confidence, end product and consistency.

Both players had a notable impact on the game for their teams, though never quite hit the heights they are capable of – which perhaps explains why neither side were at their best. Too often the build-up went through Theo and Shaw, but the link-up play in the final third wasn’t quite on-point.

Onto the San Siro pitch playing in black and white to help earn a victory over Milan – this is nothing new for Paul Pogba.

It did, however, serve a reminder as to how much he affected their form for the all-too-brief period earlier in the season he was completely fit for.

Playing off the left on this occasion, he was a good hold-up option for United while also working back to good effect – but all that was after he very cleverly created space at the near post, feinting a clipped cross to lure Gigi Donnarumma just half a yard to his left, before finishing to the keeper’s right.

This might just be a good time for the No.6 to be rediscovering peak form and fitness.

A very quick outlet he might be, but Daniel James isn’t a particularly well-rounded player.

The United winger was a regular out-ball for his team, but he doesn’t bring much variance to his final-third approach. Twice he tried to take on Fikayo Tomori in the first half, with one particularly notable occasion seeing him take that option rather than a square pass to a free man.

Neither time did he manage to evade the defender, who was the Welshman’s match for pace – and James had little to fall back on when that approach didn’t work.

There were more dead-end runs in the second half, with Tomori’s excellent and on-the-front-foot approach to his defensive work stopping not just James but also Aaron Wan-Bissaka and Mason Greenwood with ease.

The on-loan Chelsea man continues to improve and impress and must now strive for consistency.

It was all going so well around the turn of the year as they were top of the table and in three competitions, but AC Milan’s season has quickly unravelled.

In late January, they exited the Coppa Italia to local rivals Inter. 26 days later, Inter beat them again in Serie A, a third defeat in five league games at that point which saw the Rossoneri fall four points back in the title race.

Fast forward to now, four games later, and they are a massive nine points off the pace…and now out of the Europa League, too.

Injuries have undoubtedly hit. They were without Ismael Bennacer, Ante Rebic, Rafael Leao, Davide Calabria and Mario Mandzukic here, while Zlatan and Theo have been absent recently too.

It now appears they’ll end the campaign empty handed, which is a real disappointment after the early promise.

Time to end the semi-final hoodoo?

Ole Gunnar Solskjaer will of course be – rightly – insisting that nobody at Old Trafford gets ahead of themselves, and there’s still an unknown quantity of a job to do in the quarter-finals.

But United will fancy their chances against most sides remaining in the Europa League, particularly over two legs, while they are also in the FA Cup quarter-final, too.

So often in the last 18 months, the last four has been the sticking point for United – while they look likely to be runners-up in the league this term, too.

If they want to become a big team again, a great team again, pushing past that mental barrier this term – and they’ve already lost a League Cup semi – is an absolute must to reach a final and genuinely challenge for silverware.