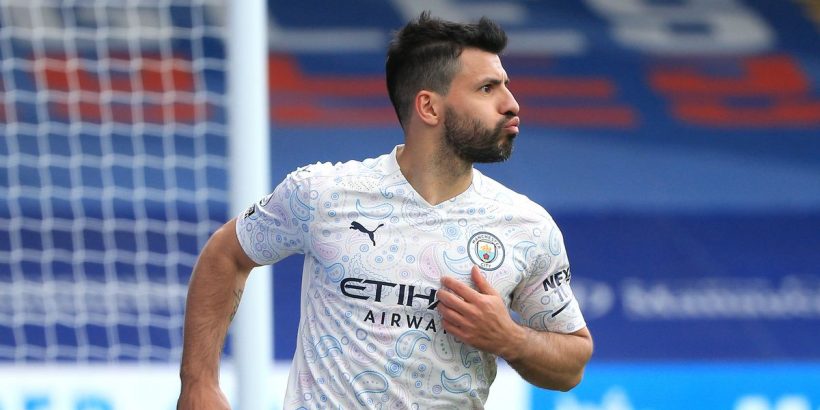 Sergio Aguero insists he is willing Liverpool on against Manchester United even though that means the Premier League title will be sewn up for Manchester City by their rivals.

The Argentine striker, 32, scored on his first City start in a month on Saturday as their 2-0 win leaves them needing just another victory to confirm their status as domestic champions again.

However, their achievement could be sealed as early as Sunday when Liverpool head to Old Trafford to face closest challengers United, who are currently 13 points adrift in second place.

With only five games left for United to play, defeat would hand the title to City and end the inevitable wait.

A similar situation was played out last season when Chelsea's win over City ensured Liverpool's title triumph was confirmed.

But Aguero is adamant he will just be pleased to get the title over the line, even if the final hurdle is courtesy of Jurgen Klopp's side.

Speaking after City's win over Crystal Palace, Aguero said: "Finally I could play, I’m so happy. It was a long time that I hadn’t played 90 minutes. The goal was good because maybe we can win the Premier League.

Palace had done a good job of keeping a much-changed City side at bay for almost an hour when Aguero struck to break the deadlock after 57 minutes.

And what a strike it was.

Benjamin Mendy surged down the left flank before whipping a cross into his teammate's path, as Aguero took one touch to push the ball out in front of him, followed by a lethal right-foot shot which fizzed past Vicente Guaita at the near post.

City's forwards had their opponents' defence in knots as a loose ball fell kindly for Ferran Torres to curl home from the edge of the box.

Aguero is now poised for a grandstand finish to his City career, with boss Pep Guardiola hailing the frontman after the game.

"What a goal, what an action, what a player, what a man. I am incredibly delighted he is back," Guardiola said.

"He is going to enjoy the last games. He showed with his goal what he has been and what he is. I am in love as a person He is an incredible guy.

"After the Champions League it is always tough but the players who didn't play in Paris spoke on the grass and they did it perfectly."