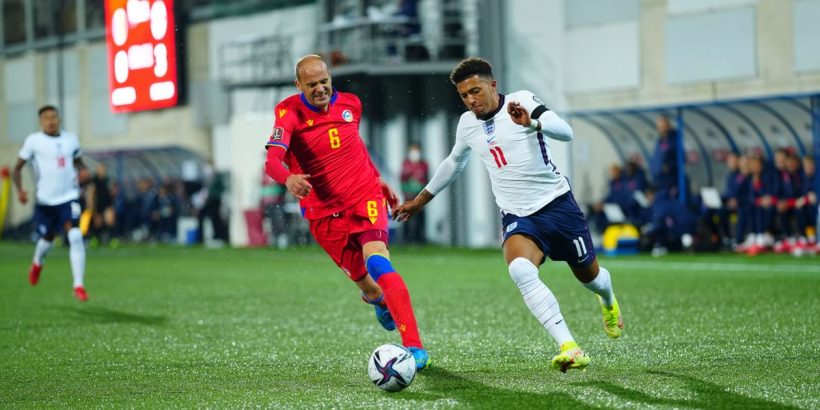 England comfortably beat Andorra on Saturday night 5-0 thanks to goals from Ben Chilwell, Buyako Saka, Tammy Abraham, James Ward-Prowse and Jack Grealish, but an Andorran defender is the one player being spoken about after the final whistle.

Jadon Sancho looked like he had bounced back to form against Andorra with a mesmerising display, assisting Chilwell’s goal in the first half and crossing for Abraham to nudge home in the second.

And one player is now feeling the consequences of the tricky winger's performance, Andorran centre-back Ildefons Lima.

The 41-year-old entered the fray in the 31st minute after his team-mate, Christian Garcia, had to be replaced through injury.

But in the 63rd minute, the substitute was substituted.

Lima was caught in a footrace with Sancho after coming up one-on-one with the former Dortmund player and, as he tried to keep up, he ended up pulling his hamstring.

Although a painful injury, it is clear to see that the former Rayo Vallecano player is still in good spirits after a flurry of social media posts.

Will Jadon Sancho be a success at Manchester United? Have your say in the comments below.

He first tweeted an image of his race with Sancho a few hours after full time with the caption: “Next time look to slow down,” followed by several race car emojis and laughing faces.

Then on Sunday afternoon, he took to Twitter again to poke fun at himself.

Alongside an image of himself clearly in agony, he said: “When the sniper hits the target, Sancho calm down next time,” with several ambulance emojis and the Andorran flag.

Lima made his debut for Andorra when he was just 17 years old and has since travelled around the world playing as a centre-back, enjoying spells in Mexico, Greece and Switzerland.

The defender, making his 133rd appearance for the country, holds the national record for most appearances made for Andorra and also the most amount of goals scored, which is helped by how he takes penalties.

To the 77,000 residents of Andorra, Lima is a national treasure, but his light-hearted approach to his injury is making him a hero around the country and a player that no one will forget any time soon.