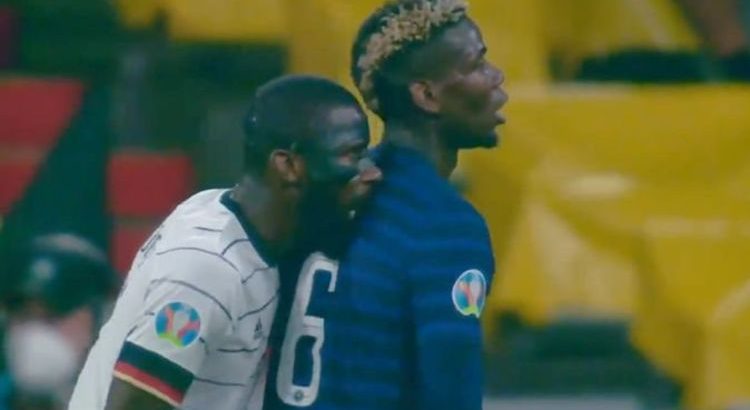 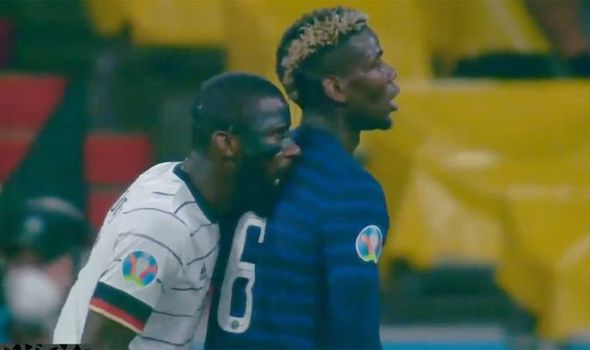 Antonio Rudiger vowed he would be “disgusting” against France just days before the Germany star appeared to bite Paul Pogba. Rudiger made strong comments in the lead up to the match between Germany and France at Euro 2020. The Chelsea star was then involved in a hugely controversial moment late on in the first half of the encounter on Tuesday.

Rudiger was clearly fired up for the tie when he spoke to the press over the weekend.

The defender wanted the Germany players to express their authority on tournament favourites France straight away.

“Of course, they have good forwards, we have to be ready to win the one-on-one challenges,” Rudiger said.

“You have to set your mark against these players.”

And Rudiger definitely lived up to that billing when the match kicked off.

Cameras caught Rudiger appearing to bite Manchester United ace Pogba high on his back late on in the first half.

Pogba immediately reacted and complained to the referee but the defender went unpunished.

The ITV pundits discussed the incident at half time.

Former England and Arsenal striker Ian Wright was not sure of the severity of the incident.

Wright said: “I don’t know what he’s done there. If he’s bit him there he’s going to flinch – he’s not flinched at all.

“He’s not flinched there, I don’t know what’s happened there, can’t see it.”

“When you see that Pogba reaction, it felt like a bite,” Vieira said.

“So I don’t really understand what he was trying to do there, Rudiger.”

Meanwhile, Roy Keane insisted it could have been a lot worse.

“I think it was more of a nibble wasn’t it than a bite,” Keane reacted.

“Yeah it wasn’t a proper bite. But a silly thing to do.”