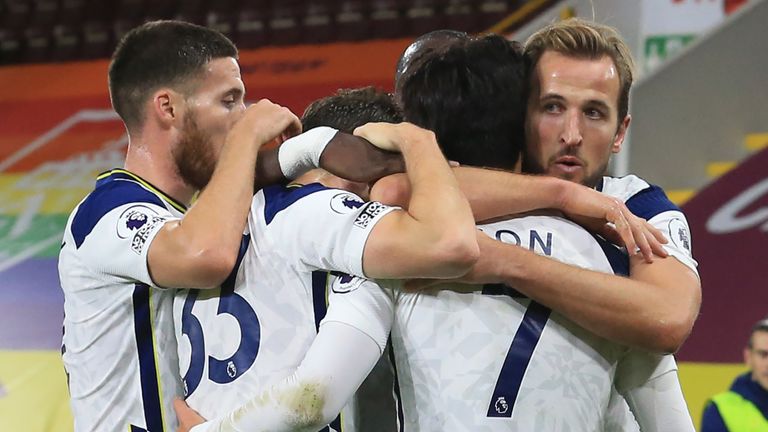 Are Tottenham genuine contenders for the Premier League title?

It was the burning question that surfaced in the aftermath of Spurs’ late 1-0 victory at Turf Moor, as Heung-Min Son and Harry Kane combined for the ninth time this season to see off Burnley on Monday Night Football.

Tottenham’s third consecutive away victory moved them to within two points of the Premier League summit and prompted Kane to declare Spurs could achieve something special.

Gary Neville thinks the Premier League title may be beyond Spurs this season but accepts their unprecedented summer recruitment drive and Jose Mourinho’s winning mentality has got the club dreaming of the unthinkable.

“When Harry Kane said Spurs could ‘achieve something special’, he wasn’t talking about going and winning the FA Cup or the Carabao Cup, he’s talking about the Premier League or a big European trophy,” Neville said.

“I don’t think they can win the league, I really don’t, but because Jose Mourinho is there, there will be an element of thinking he can do the unthinkable.

“I never expected Tottenham to invest like they have done this summer, never at all. They’ve had to borrow money from the bank after the overspend on the stadium, so to go and do that this summer… Jose Mourinho is the kind of manager who will have gone in there and demanded it.

“Spurs have been criticised for not following through in the transfer market in the past, but they have seen it through and delivered this summer and now have a squad that can go and challenge.

“They have got some unbelievable attacking players and it is a strange season, but I don’t think they can win the league purely because they haven’t done before and the game at Burnley could have swung either way.

“To finish third ahead of Arsenal, Manchester United and Chelsea would be an unbelievable achievement. I didn’t have them in my top four at the start of the season, but we are now including them, so that is a massive shift in only a few weeks.”

Neville added: “The idea of Mourinho winning the league with Tottenham is an unbelievable story.

“I don’t think it will happen, but the fact he is there will give them belief they wouldn’t have had before because the only thing he thinks about is winning.

“He will do anything to win, and that’s the mentality those Tottenham players need. Over 30, 40, 50 years they have struggled to have a ruthless, clinical, horrible mentality, and that is what Mourinho brings.”

Sky Sports pundit Jamie Carragher admitted he would relish the prospect of Mourinho getting his hands back on the Premier League trophy after being subjected to criticism in the five years since his last title-winning campaign.

“I obviously want Liverpool to win the league, but if someone else were to win it, I’d love to see Jose Mourinho win again,” Carragher told Monday Night Football.

“Mourinho has had so much thrown at him recently; accusations that he’s yesterday’s man, his football is from a different era. I’d love to see him win again and almost stick two fingers up at pundits and the press, whoever.

“It would be a good story for Mourinho to do that again. After what he’s achieved in his career, he still gets a lot of criticism because he rubs people up the wrong way at different times, but it would be nice to see him win again in a different way.”

Carragher added: “There was no bigger fan of Mauricio Pochettino than me, but his team was done, and it needed to evolve and change.

“When Jose came in things were a bit stop-start last season, and don’t think for one minute that anyone involved with Tottenham – from Daniel Levy, to Jose Mourinho and his players – thought about challenging for the title this season, it would have all been about getting into the top four.

“But because this season has been so strange – Liverpool losing Virgil van Dijk, Manchester City not looking right and having already dropped eight points – if there is ever going to be a chance when someone does do something, this will be the season.”