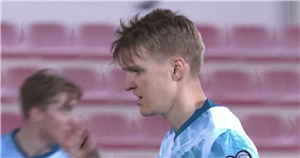 Arsenal star Martin Odegaard was taken off through injury as he captained Norway against Gibraltar on Wednesday evening in a worrying blow for Mikel Arteta.

The 22-year-old was wearing the armband for the first time since former skipper Stefan Johansen retired from international football, but could not return for the second half.

Erling Haaland led the line for Stale Solbakken's men but it was Alexander Sorloth and Kristian Thorstvedt that handed the vistors a 2-0 lead at the break.

Odegaard needed treatment before the whilstle and limped off before being replaced alongside Mohamed Elyounoussi as Sander Berge and Jens Petter Hauge entered the action.

Although the severity of the injury is not yet known, Odegaard was left in pain after he appeared to roll his right ankle while cutting onto his favoured left foot.

Solbakken said of his star midfielder and new skipper earlier this month: "There are some players who grow up with it, while other feel it as an extra burden weighing on them.

"He was chosen by me after a review with the staff and the coaches, and then it was a feeling I had after conversations with the players.

"We think that Martin has had a long career in top European football already."

Arteta said of Odegaard after the comeback draw with West Ham: “I think he had an incredible performance.

“I think he was very intelligent the way he read the game, the way he affected the game and again he showed how much he wanted to win.

“When everyone was a little trembling he gave us that stability and that composure on the ball and he created chance after chance. He’s been showing that, I think, from week one.

“The way he steps on the pitch, he always wants the ball, the way he commands the pressing. He’s been really influential.

“I think we’ve all been a bit surprised because he looks really shy and humble, but when he steps on that pitch he’s a real character and he loves to play football.”