Mesut Ozil might have been left out in the cold at Arsenal this season, but he proved in a Twitter interaction with Piers Morgan during the game against Leeds that he’s got plenty of fighting spirit left. Ozil has endured a torrid time at the Emirates ever since signing a new contract in 2018.

He fell out of favour under Unai Emery, with fans also growing frustrated at Ozil’s performances.

Mikel Arteta gave him a second chance when he took charge back in December.

But the Arsenal boss soon dropped Ozil too and he’s not been included in either the Premier League or Europa League this season.

Ozil has faced plenty of accusations for choosing to run down his contract as opposed to seeking a move elsewhere for regular football.

JUST IN: Arsenal fans convinced of transfer activity with Edu in attendance 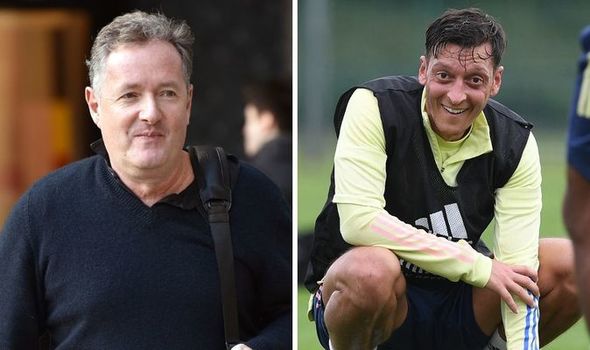 However, the 32-year-old is still clearly a fan of the club and often shows his support for his team-mates on social media.

Ahead of the match against Leeds, Ozil tweeted: “Let’s goooooo… #COYG #YaGunnersYa.”

“I wish you would, Mesut,” he replied.

Freddie Ljungberg explains what made him leave Arsenal in the summer

Tottenham ace warned joining Arsenal would be ‘too much hassle’

“For your sake and Arsenal’s.”

“Piers, was that really you, or was your phone hacked?”

And Arsenal fans were in tears at Ozil’s reply to Morgan.

One supporter tweeted: “I’m an Arsenal fan but this was just brutally honest.”

Another wrote: “MESUT WITH THE STRIKE.”

A third posted: “Hello @TwitterSupport I’d like to report a murder.”

Another joked: “More shots on target than our players today.”

Ozil’s contract runs out at the end of the season, but Arsenal are hoping to offload him in the January transfer window.

A move to Turkey has been touted, but it remains to be seen whether Ozil will be happy to accept a paycut.