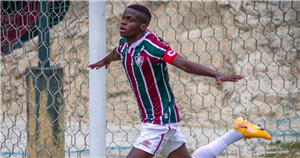 Arsenal and Manchester City are on a collision course to sign the 'Brazilian Paul Pogba' this summer.

It comes as both sides look to improve their squads in the transfer window for very different reasons.

City are the dominant force in the Premier League – having won four of the last five titles – but that has yet to transpire in Europe.

They came as close as they ever have in the Champions League only to lose to Chelsea in the final.

Arsenal, on the other hand, have just endured one of their worst seasons in living memory – finishing eighth in the Premier League.

It means they will not play in Europe at all next year, ending a consecutive run of 25 years of participating in a continental competition.

Mikel Arteta has come under pressure from fans but is set to be backed in the summer transfer window with Metinho being eyed.

The 18-year-old has been dubbed the next Pogba for his similar attributes, including excellent passing, an impressive physique and an absolute cannon of a shot.

Born in DR Congo, Metinho emigrated to Brazil at the age of one with his father Abel, who has always dreamt of his son playing for the national side.

And that is close to being a reality after being called up to the Selecao last year to train with the likes of Neymar and Thiago Silva.

According to Goal, City are prepared to snatch up the teenager ahead of Arsenal with a £4.3m move.

The Brazilian wonderkid will then be sent to sister club Troyes in France on loan for the season.

The Etihad outfit have already secured his Fluminese teammate Kayky, who has been tipped as the next Neymar from Brazil.

Who does your club need to sign in the transfer window? Have your say in the comments below.

He told GloboTV: "People joke and sometimes call him Pogba due to his style, his appearance and because he plays with his head up.”

Metinho sheepishly replied: “There's a long way to go before I get to his level. But I will work for it, and maybe one day be better than him!"

READ MORE: Man Utd line up their next four signings – but none are set to be strikers