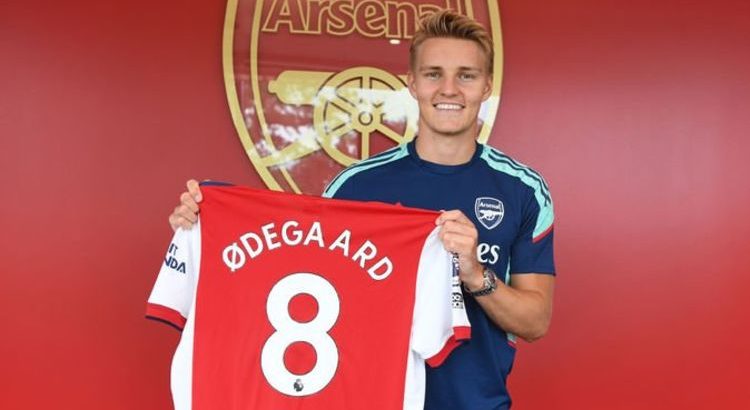 Arsenal legend Paul Merson has blasted his former club for their recent signings of Martin Odegaard and Aaron Ramsdale. Both deals were confirmed on Friday, receiving mixed reviews from Gunners fans who will be fully aware that Mikel Arteta faces a huge season ahead after the disappointment of missing out on European football for the first time in 25 years.

Odegaard has arrived to provide extra competition in attacking midfield, leaving Real Madrid in a £30million deal after six years with Los Blancos.

Needless to say, it did not work out perfectly for the Norwegian at the Bernabeu, but he has demonstrated enough on his various loan spells to remain a hot prospect in the European game.

Merson, who made over 300 league appearances for Arsenal, is less optimistic, writing in the Daily Star: “Mikel Arteta is making a mistake signing Martin Odegaard – and his job could soon be on the line.

“Arsenal have already lost to Brentford and now they have to play Chelsea and Manchester City.

JUST IN: Man Utd and Tottenham among five clubs who could sign Lewandowski after latest twist

“They could be bottom of the league and I don’t think the board are going to hang around with Arteta for long if he goes on a bad run.

“If Odegaard really wanted to be at Arsenal he would have signed at the end of his loan. But he didn’t want to join them. He wanted to go back to Real Madrid.

“He didn’t exactly pull up any trees on loan did he? He only scored two goals! I think it’s a mistake. I think it’s another lazy signing.

“No other Premier League team was going for him. No-one else is trying to sign Aaron Ramsdale either.

“I wonder if it really is Arteta. But whoever it is, it will be Arteta paying the price if it all goes wrong.

“Anything could happen when Arsenal take on Chelsea this weekend but I think this is a big few weeks for my old club.”

Interest had supposedly been shown in James Maddison and Houssem Aouar this summer, but Odegaard has now got the nod after serving his apprenticeship on loan last campaign.

After only scoring once in the league, his stint in north London was considered underwhelming by some, but his prior loan with Real Sociedad demonstrated that he can be one of the most creative players in Europe.

It does pose a dilemma for Arteta, however, that Emile Smith-Rowe was the Gunners’ shining light against Brentford in the No 10 role favoured by Odegaard.

Arsenal are searching for a long-term heir to Mesut Ozil as the creative spark behind the strikers, and the two youngsters are now set to battle it out.

While one of them will have to compromise, the club as a whole could benefit from the healthy competition which is sure to follow.

Even so, Merson is undoubtedly correct about the pressure Arteta will come under if the tough assignments against City and Chelsea go as badly as expected.

Bottom of the league at the end of August would not look good, particularly after spending more than £130million on five new signings this summer.