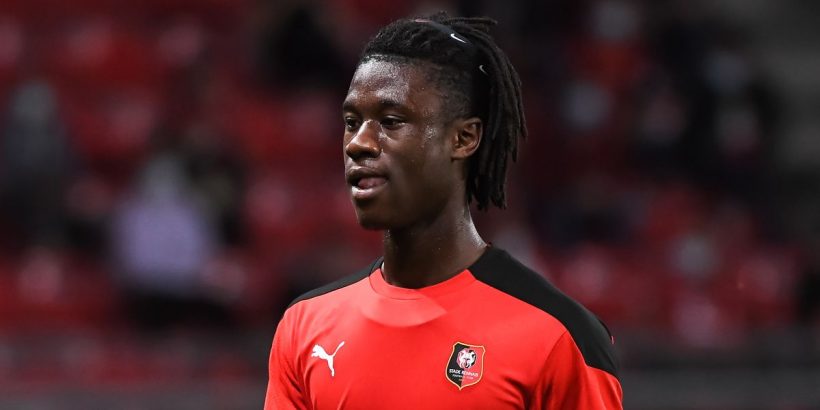 Arsenal have their eye on bringing in French midfielder Eduardo Camavinga to the Emirates and reports suggest they are doing "everything they can" to seal a deal from Rennes.

Camavinga, 18, is one of Europe's most exciting prospects and he said he was "flattered" when told of potential interest from the likes of Real Madrid and Bayern Munich.

Though the report adds that Premier League giants Arsenal are doing all they can to sign the youngster, making him their priority signing for the coming summer transfer window.

Camavinga was born in an Angolan refugee camp and has been with Rennes since his 16th birthday becoming the club's youngest professional player.

His current deal at the Ligue 1 club doesn't expire until June 2022 but his agent Jonathan Barnett believes he is ready to step up to the Premier League if the right valuation is met.

“Camavinga can play next year in the Premier League. He is that good," said Barnett, who also manages the likes of Chelsea's Mason Mount and Jack Grealish for Aston Villa.

"His background has been tough if you know what he went through as a refugee and the burning of his home [in Rennes].

"But his character is amazingly strong. He is not your average 18-year-old. Playing in front of 100,000 people is not going to scare him. He’s a lovely boy and I think he’s going to be a superstar.”

Camavinga became the youngest French international of all-time and scored on his debut in September 2020.

In his first two full seasons with Rennes, he has scored three goals in 73 appearances.

"He is a little more comfortable with a more defensively-minded partner alongside him," said Smith.

"He will likely fall into a truly central midfield role. His versatility is likely to make him a very important part of the France squad.

"Similar to that of a largely upgraded Blaise Matuidi.”