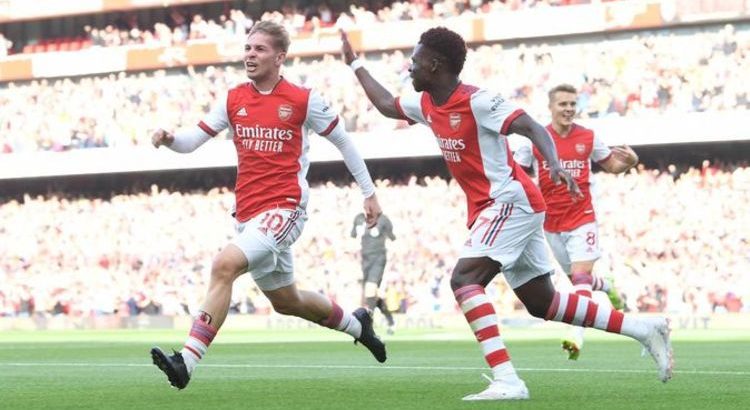 Arsenal’s season has completely transformed after they experienced their worst ever start to a top-flight campaign, and youngsters Bukayo Saka and Emile Smith-Rowe are largely to thank for the turnaround. The academy graduates are ready to lead a new era at the Emirates, and a former Gunner thinks that they drew inspiration from three former players.

Young Arsenal prospects Bukayo Saka and Emile Smith-Rowe have recently starred for the Gunners, and look to lead Mikel Arteta’s side into a new era at the Emirates Stadium.

Both players scored in Arsenal’s breakthrough game against Tottenham in the north London derby, as the youngsters sparked Arteta’s side into life to help turn around their worst ever start to a Premier League season.

Former Arsenal star Per Mertesacker is now an academy director at the club, where Saka and Smith-Rowe came through, and the German believes that the pair are vital to the Gunners progression as they look to climb back into Europe and challenge for the Premier League once again.

Mertesacker thinks that the young English pairing are also good enough to inspire a new generation of youthful talent at Arsenal, but also believes that they were both inspired themselves when coming through the academy.

JUST IN: Solskjaer could get the Man Utd sack because of Newcastle takeover

The academy director spoke exclusively with The Mirror, and detailed how he strongly believes that the academy is an excellent place for inspiration, with successful players acting as role models to the younger talent within the ranks.

Mertesacker said to The Mirror: “It’s always been a narrative at Arsenal to give young players a chance to play at the top. We’re asking Bukayo and Emile to lead us back to the Champions League.

“They will proudly take that but we also have to understand the context. It’s always been there.

“If you ask Bukayo and Emile they will tell you how they were inspired by Jack Wilshere, Fabregas, Bellerin. So the next generation of Under 9 players at the academy will be inspired by these players.

“However they will speak about the bumpy road, their learning, that journey that hasn’t always been easy. The reality is that these two are exceptions.

“The academy staff has always given its all in delivering players to the highest level which can make a difference in our first team or in some other first team. That is hugely important to the club and will always be a priority.

“We are giving young players the chance to learn to be vulnerable, to be exposed to the highest level and to be proper leaders for this club in two or three years’ time, while acknowledging they probably need to suffer before they bring us back to glory.

“That’s my expectations. Hopefully Bukayo and Emile can take on the next level of talent into the first team and challenge them in the right way.”

Smith-Rowe was handed the no.10 shirt ahead of the new season, and Saka is already sporting the no.7, with Arteta putting a lot of faith in his prized youngsters.

Arsenal are in the midst of a major rebuild, and the club spent more than any other Premier League side this summer, as £150million was spent on six new signings by Arteta and sporting director Edu.

Ben White, Aaron Ramsdale, Nuno Tavares, Takehiro Tomiyasu, Martin Odegaard and Albert Sambi Lokonga were all brought in over the summer, and the signings seem to have gelled as Arsenal’s form quickly turned around.

Arteta will be hoping his new signings and young stars will be able to put Arsenal back in European contention, after missing out for the first time in 26 years last season.