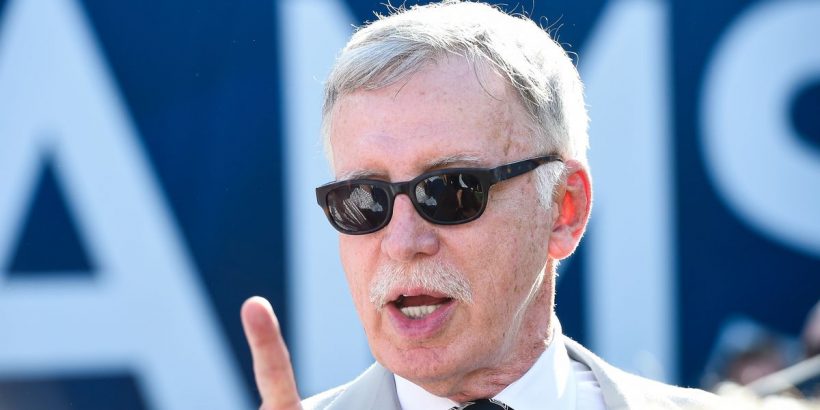 Arsenal staff have been told the Kroenkes have no intention of selling the club, despite more protests expected before the end of the season.

Stan Kroenke is deeply unpopular at the Emirates, particularly in the wake of the now disbanded European Super League.

The Gunners were named as one of 12 founding members for the proposed tournament, that would have set up a closed shop at the top of the European game.

After furious supporter backlash, Arsenal confirmed they would step-back from the plans, although that has done little to stop fan fury.

There has already been demonstrations outside of the ground, with more expected ahead of their final home game of the season with Crystal Palace.

Speculation about the Kroenkes potentially selling their stake in the club have only been heightened after Spotify co-founder Daniel Ek announced his desire to purchase a stake.

Ek, who has a net worth of around £3.4bn, announced on social media, that he would “throw his hat in the ring” should Arsenal be put up for sale.

"As a kid growing up, I’ve cheered for @Arsenal as long as I can remember," Ek wrote on Twitter. "If KSE would like to sell Arsenal I'd be happy to throw my hat in the ring."

He added that he hoped to hold talks with the current ownership, but KSE (Kroenke Sports & Entertainment) released a statement which read: "In recent days we have noted media speculation regarding a potential takeover bid for Arsenal Football Club. We remain 100% committed to Arsenal and are not selling any stake in the Club.

"We have not received any offer and we will not entertain any offer.

"Our ambition for Arsenal remains to compete to win the biggest trophies in the game and our focus remains on improving our competitiveness on the pitch to achieve this.”

And according to the Athletic, that sentiment has now been passed to all members of staff at the club.

The report claims the Kroenke’s had a conference call on Monday in which he was revealed “they have no intention” of selling the club.

The club do expect further protests before the end of the season and staff were also told to not drive into the stadium on the day, with exit plans already being drawn up for all.