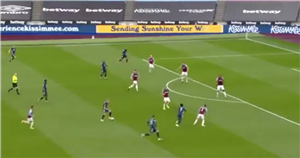 Arsenal fans have heaped praise on Calum Chambers for emulating Liverpool left-back Andy Robertson in their 3-3 draw away at West Ham on Sunday.

The Gunners produced a remarkable turnaround at the London Stadium, having initially fallen three goals behind inside a calamitous opening 32 minutes.

However, Tomas Soucek’s own goal seven minutes before the interval handed Mikel Arteta’s men the glimmer of hope required to mount a stunning comeback in the second half.

Craig Dawson turned in another own goal for the Hammers 15 minutes after the break, before Alexandre Lacazette netted the crucial equaliser eight minutes from time.

In the end it was David Moyes’ side who were left clinging on to a point, with Arsenal coming close to taking all three on an enthralling afternoon in east London.

The Gunners faithful have been waxing lyrical about Chambers’ performance in the six-goal draw, drawing comparisons between their right-back and Reds defender Robertson. One fan posted a clip on Twitter which shows the 26-year-old galloping forwards in the build-up to their second goal, before whipping in a dangerous cross that Dawson thumps into his own net.

The supporter wrote: “Watch Chambers closely here, it makes a massive difference when your fullback is willing to do this. “This is Andy Robertson all over. By busting a gut the opposing winger decided not to track him which gave him space to create the goal. Genuinely so impressed with his performance yesterday, can’t speak about it enough.”

Another fan replied: “Chambers was immense for us in the comeback. Plus defensively he is always been underrated for us. Fantastic performance again from him.”

While a third put: “Gut busting run & got the reward. He had a v good game.”

Chambers has only made six appearances for Arsenal this season, with an ACL injury sustained in December 2019 keeping him out of action for almost a year.