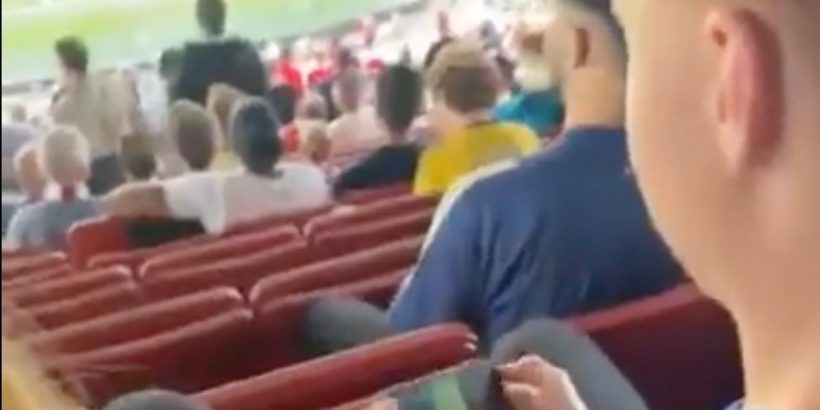 Arsenal fans were spotted streaming Cristiano Ronaldo's second Manchester United debut whilst they were sat in the stands at the Emirates.

Ronaldo has, in true Ronaldo style, marked his return to Old Trafford with two goals which have helped United to a 3-1 win over Newcastle.

Naturally the attention of most football fans has been directed towards the five-time Balon d'Or winner's return, which has taken a lot of focus away from the Gunners.

They faced a must-win bottom of the table clash at home against Norwich, which they were victorious in thanks to Pierre-Emerick Aubameyang's solitary second half goal.

However, it seems even their own fans who were at the game were distracted by Ronaldo's second United debut.

A video shared on social media showed a young supporter on his phone watching the action from Old Trafford.

He appears to be catching up on Ronaldo's first-half opener during the interval of the 3pm kick-offs, as players can be seen warming up and an announcer is heard in the background.

How many goals will Ronaldo add to his brace against Newcastle? Let us know in the comments section.

Who can blame the lad? It's not every day one of football's greatest ever players returns to the Premier League.

He probably wasn't even born the last time Ronaldo graced English football all the way back in 2009.

He will have to wait a while to see the 36-year-old in person, though. Arsenal don't host United this season until April next year. Ronaldo opened the scoring for United just before the break when he tapped in after Magpies goalkeeper Freddie Woodman had spilled the ball.

He then gave the Red Devils the lead again after Newcastle had equalised, this time with a low left-footed effort from inside the box.

Goals from Bruno Fernandes and Jesse Lingard rounded off the win and Ronaldo played the full 90 minutes, despite fitness concerns earlier this week.