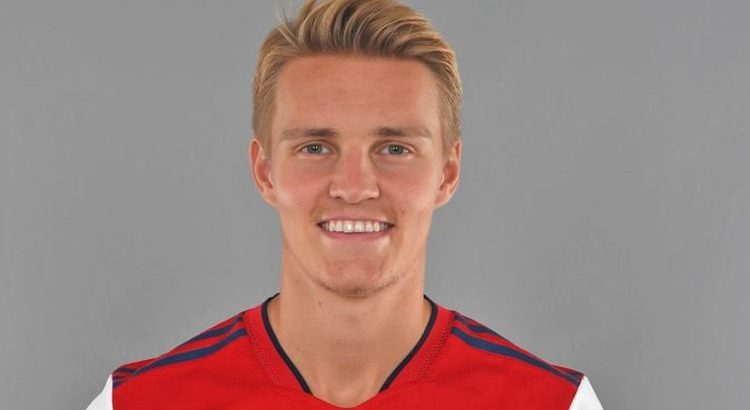 Arsenal have today announced the return of Martin Odegaard, who joins from Real Madrid in a permanent transfer deal worth £34million. The Norway international will now link up with Mikel Arteta’s side but won’t be involved in their Premier League clash with Chelsea on Sunday. And, in the wake of the deal for the playmaker, the Gunners now appear ready to shelve interest in James Maddison and Houssem Aouar.

Arsenal have been on a hunt for a new playmaker this summer.

And their wait to secure a new signing in that area is now over, with Odegaard returning to the club from Real Madrid.

The Gunners said in a statement: “Martin Odegaard has joined us in a permanent transfer from Real Madrid.

“The Norwegian international re-joins after spending the second half of last season on loan with us, during which time he made 20 appearances, notably scoring in our Premier League win over Tottenham Hotspur at Emirates Stadium in March.”

And Arsenal also announced Odegaard would wear the No 8 shirt.

“Martin will wear our number 8 shirt,” they added.

“Everyone at Arsenal welcomes Martin back to the club.”

Now Arsenal have signed Odegaard, it looks like they’re ready to abandon pursuits of Maddison and Aouar.

Maddison has been on their radar throughout the summer so far, with the Leicester star open to moving to the Emirates Stadium.

The problem has been, however, that the Foxes don’t want to lose their prized asset on the cheap.

History shows that Leicester can be difficult negotiators. They got premium rates for Harry Maguire and Riyad Mahrez when selling the pair to Manchester United and Manchester City respectively.

And they’ve been similarly stubborn this summer, making it clear it’ll cost in the region of £80million to let Maddison jump ship.

Now Odegaard is on board, the need for Arsenal to go that high has been lessened.

And it’s a similar story when it comes to Aouar, who has also been linked with a move throughout the transfer window so far.

A year ago, Arsenal were sold on the signing of the France international.

But with Lyon doing their utmost to price the north London giants out of a deal, they then switched their attentions to landing Thomas Partey late in the window instead.

Aouar sparkled for the Ligue 1 side last season and, in the time since, has been linked with a move to Tottenham.

And it’s hard to imagine Arsenal pursuing the Frenchman again, especially with Arteta now likely to focus his efforts elsewhere.

A new striker at Arsenal wouldn’t go amiss as Pierre-Emerick Aubameyang and Alexandre Lacazette enter the twilight years of their career.

And who they end up bringing in remains to be seen.

“There’s one big problem – the manager,” O’Hara said after their recent 2-0 defeat to Brentford.

“He’s not good enough, he’s got to go. It’s a myth how he’s still in the job, he’s going to be the first manager to get the sack.

“The players are looking for him to make decisions, he doesn’t know what he’s doing! The style of football they’re playing isn’t working, they’re not good enough.

“They won’t even get into the top half of the table.”