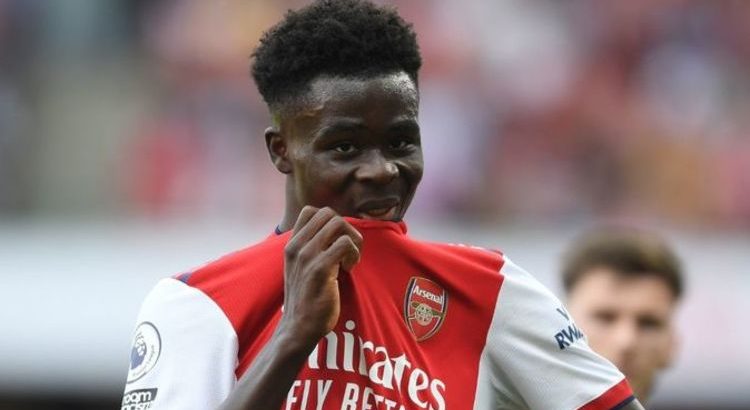 Clubs are reportedly beginning to approach Bukayo Saka over a potential transfer but Arsenal consider their academy graduate “untouchable”. That’s according to transfer expert Fabrizio Romano, who has provided an update on the England international, who is attracting plenty of interest behind the scenes.

Saka was first embedded into the Arsenal first-team picture by Unai Emery before his dismissal in 2019.

Mikel Arteta also showed immense faith in the teenager and handed him the chance to play regular football for the Gunners.

It was an opportunity that Saka firmly grasped with both hands and he is now considered one of the club’s key players when it comes to Arteta’s rebuild.

Before the 20-year-old penned his long-term deal, Liverpool were among a list of admirers, as per reports.

Now Romano claims a number of unnamed teams are beginning to sound out Saka as a potential target ahead of future transfer windows but Arsenal are adamant he is going nowhere.

“Some clubs are starting to approach Bukayo Saka, Arsenal consider him untouchable,” Romano said on the Here We Go Podcast.

“They are planning to build on players like Saka also for the next years.”

Saka has received overwhelming support from the entire nation following his costly penalty miss against Italy in the Euro 2020 final.

However, the youngster has already put the cruel blow and sickening racial abuse behind him after starting the season impressively.

He was recently on target and assisted in England’s 4-0 triumph over Andorra to the delight of the Wembley crowd.

Speaking to the ‘What the Footie?’ Podcast, Arsenal striker Folarin Balogun’s brother Royce launched a passionate defence of the club’s youngsters including Saka, praising his maturity and ability.

“It is a very tough environment for a lot of them,” said R.Balogun.

“You can tell that a lot of them are carrying weight on their shoulders. All of them have carried themselves with pride. I’ve seen Emile [Smith Rowe] and Bukayo, especially Bukayo with what he’s gone through.

“Bukayo’s one of the best young ballers I’ve seen. He’s skyrocketed and never given up or got jaded by the success he’s had. It’s a good platform for other young ballers and people around him.

“If you keep going you just have to take your chance when you get it.”

Arsenal have already sold one of their finest academy graduates in the form of Joe Willock in recent months, offloading the attacking midfielder to Newcastle in a £25million deal.

Yet the Gunners remain determined to keep hold of Saka in particular, who is deemed ‘untransferable’.