Arsenal travel to face Manchester City on Saturday when the Premier League returns following the international break. Gunners fans are eager to see Thomas Partey make his debut for Mikel Arteta’s side, as Express Sport brings you the latest team news.

Arsenal have won three of their four league games so far this season, with their only defeat coming against defending champions Liverpool.

So they will hopeful they can get a result against a City side struggling for form, with Pep Guardiola’s side having already been beaten by Leicester at the Etihad Stadium, while they were held to a draw at Leeds last time out.

Guardiola has had the international break to devise a way to beat his former No2 Arteta – but the Gunners can take confidence from a win over City in the FA Cup semi-final.

After Arsenal lost 3-0 to City in an abject performance at the Etihad in June, the Gunners got their own back when it mattered with a 2-0 win at Wembley just over a month later. 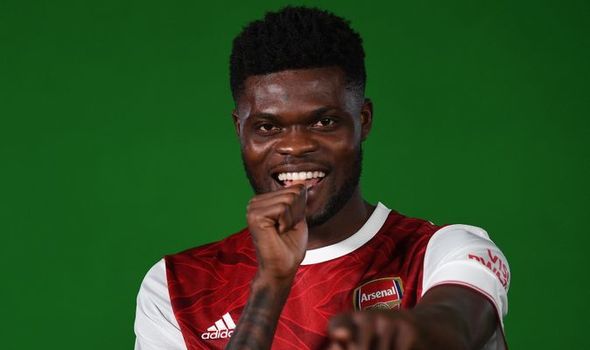 Pierre-Emerick Aubameyang scored twice that day to send Arsenal into the final, and Arteta will hope the forward passes fit for the City game after suffering a slight ankle sprain.

If available, Aubameyang is likely to start on the left flank of Arsenal’s attack, with Alexandre Lacazette leading the line, and Willian on the right – although the Brazilian’s place could come under threat from Nicolas Pepe.

But the big team news centres around Partey, who is expected to make his debut following his dramatic switch from Atletico Madrid on the final day of the transfer window.

Targeted by Arsenal all summer, it is hoped Partey will continue the defensive improvements under Arteta by offering better protection from the midfield, and the Ghana international is expected to slot straight into the engine room. 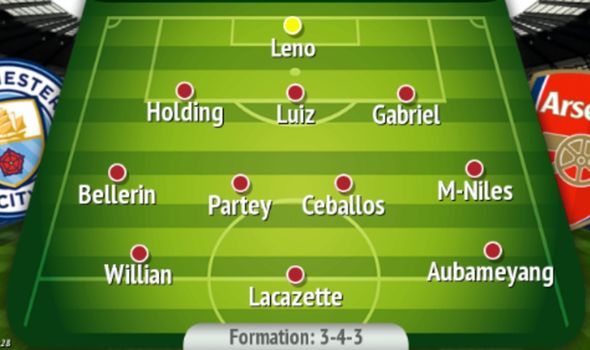 It is thought that Partey’s qualities will eventually allow Arteta to move away from playing three at the back and towards adopting the 4-3-3 or 4-2-3-1 favoured by Liverpool and City.

However, Arteta is likely to stick with the 3-4-3 for now, with Dani Ceballos alongside Partey in midfield, and Hector Bellerin and Ainsley Maitland-Niles operating as wing-backs either side.

Bukayo Saka could get the nod at left wing-back, but Arteta may opt for Maitland-Niles’ more obvious defensive qualities against a City side full of threats.

In defence, Arsenal’s main issue is that Kieran Tierney is still self-isolating after coming into contact with a Scotland team-mate who later tested positive for coronavirus.

Rob Holding could come in for Tierney, with Gabriel and David Luiz retaining their places in front of goalkeeper Bernd Leno.