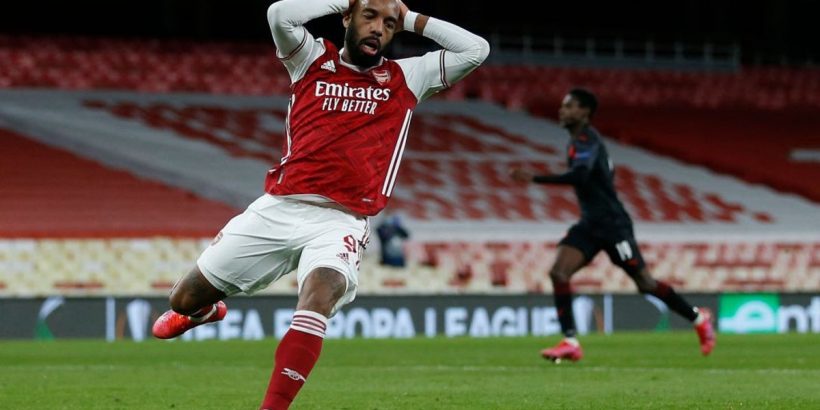 It was never going to be as easy as it should have been. Even as Arsenal, wasteful and timid for large parts of this match, looked to have emerged with an important 1-0 win in the first leg of this Europa League quarter-final with Slavia Prague, a spanner in the works came via a 93rd-minute equaliser.

Second-half substitute Nicolas Pepe had given Mikel Arteta a precious lead in the 86th minute, one that should have come earlier but was no less welcome when it finally arrived. But just as it looked like Arsenal had prevented a relentless Slavia Prague from registering an away goal, Tomas Holes’s header at the death put the Czechs in control.

A penny for Pierre-Emerick Aubmeyang’s thoughts as he began it all on the bench. A club captain just seven months into a three-year deal worth a reported £55million, deemed unnecessary for the start of Arsenal’s most important match of the season. Perhaps even a hindrance to the collective’s Champions League ambitions.

But it was Aubameyang’s alertness to gain possession and set Pepe on his way that broke the deadlock. Even with a hand in the only home goal of the evening, his absence from the XI felt compounded by the introduction of Gabriel Martinelli five minutes before he came on as part of a triple change along with Pepe.

No doubt the post-mortem will shed light on the tactical thinking and wider ramifications of tonight. But just as it looked both the player and the team would be satisfied with a lead and a clean sheet to take with them into next Thursday’s second-leg, the equaliser further muddied the waters. On balance, a goal was no less than Prague deserved. Arsenal just should have scored more.

A deficit to the top four of 10 points with eight matches to play has pretty much made the Premier League route to European club football’s marquee competition a dead end. So maybe it should have been no surprise Arsenal stepped tentatively throughout the first half at the Emirates, wary of becoming the third British side to fall to the Czech First League leaders.

The manner of Slavia Prague’s success over Leicester City and Rangers to get here was through swarming on moments of indecision. And in a watchful first half, the visitors took the initiative as their hosts took time to find their feet. Lukas Provod rasping effort just over the bar from the edge of the box at the end of a smart bit of initial spreading of play from left to right was a shot across the bows.

A similar effort from Pete Olayinka, this time along the turf, was comfortably saved by Bernd Leno. And with 58 minutes on the clock, a Slavia Prague overlap on the left had skipper Jan Boril as close a shot as they were able to muster up until that point. A deflection off his opposing captain Hector Bellerin diverted the ball away from the far corner and into Leno’s legs.

But what Arsenal lacked in intent was at odds with the chances created, and whatever travails await in Prague next week could have been a hell of a lot easier if they converted two simple chances.

The first fell to Bukayo Saka, given free reign on the right and spring-boarding off the touchline to latch onto a through ball from Rob Holding that gave him the entire penalty area to himself. Alas, having reached the edge of the six-yard box, his trust left foot sent the all wide of the far post.

The second and clearest of the two was solely the product of Alexandre Lacazette’s endeavour. A willing presence at the top of Arsenal’s formation, his harrying of the last man allowed him a clear 60-yard run on the Slavia Prague goal. An open-footed right foot guided the ball over a goalkeeper Ondrej Kolar, but the elevation was too great, bouncing agonisingly off the bar just above the top corner.

Of course, this is Arsenal, and the prevailing mood in a stadium devoid of fans was still somehow one of impending doom. It looked to have arrived on 76 minutes in the form of Petr Sevcik’s strike after a break from the left had red shirts in disarray. The anguished screams from the Slavia Prague bench, who were animated and encouraging throughout, suggested they’d let them get away with it.

They were silenced outright with four minutes of the 90 to go when Aubameyang’s pass was taken up by Pepe and calmly flicked into the far side netting. But, into the penultimate minute of the added four, a corner off the back of a superb save from Leno was pinballed to the back post where Holes launched himself into a powerful diving header. Leno, this time, could only palm into the roof of the net.

The eruption from the visiting squad – players, staff and administrators who were able to sneak in, was the loudest of the night and continued well beyond the full-time whistle. Arsenal need to be more clinical and measured if they are to make it to the semi-finals of this competition. Slavia Prague just need to do more of the same.