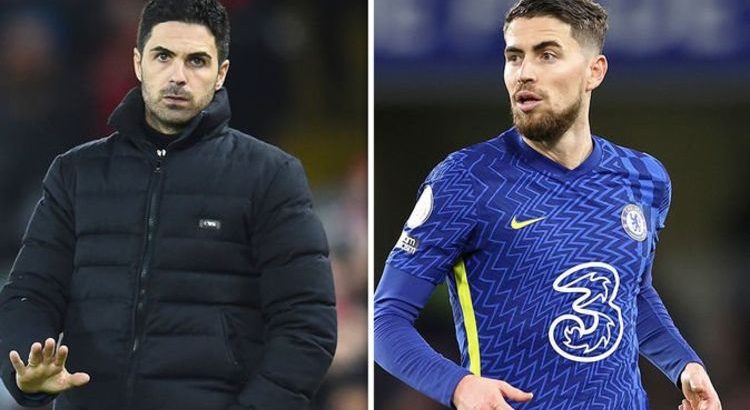 Arsenal want to sign a player in the mould of Chelsea star Jorginho, according to reports. Arsenal are reportedly attempting to rush through the signing of Juventus star Arthur. The Gunners are desperately short of senior midfielders ahead of Sunday’s north London derby at Tottenham.

Arsenal are without Thomas Partey and Mohamed Elneny, who are both at the Africa Cup of Nations.

Meanwhile, Granit Xhaka got sent off in the Carabao Cup semi-final first leg draw at Liverpool on Thursday and will miss the next two matches.

That leaves just Albert Sambi Lokonga as the only recognised central midfielder in the Gunners’ first-team squad.

Lyon star Bruno Guimaraes and Paris Saint-Germain’s Georginio Wijnaldum have both been linked with moves to the Emirates.

But Guimaraes appears too expensive in this window and European football expert Julien Laurens claims Wijnaldum is not the type of player Mikel Arteta is looking to sign.

Football.london reported on Thursday Arsenal are trying to get a loan deal for Arthur over the line before 12pm on Friday in order for him to be registered to play in Sunday’s derby.

Laurens says Arthur is exactly the type of player Arteta is looking for.

He claims he is similar to Jorginho, which is the profile the Arsenal manager is targeting.

“They need a player like Arthur. They need a Jorginho,” Laurens said on the Gab and Juls podcast.

“You play a holding midfielder and you just pass the ball and you dictate the play. This is not Gini’s game.

“That’s not what [Partey and Xhaka] do, they can’t play in front of the back four, that’s not the profile.

“Wijnaldum is not the profile that Arteta is looking for right now.

“The profile is a Jorginho type of player. He’s not as good but you get the idea.

Arsenal lost Cedric Soares to injury on Thursday, with Bukayo Saka and Calum Chambers also struggling at the end of the match at Anfield.

Arteta says there is a possibility Sunday’s match is postponed.

He said: “It’s a possibility in any game from our side, from the opponents’ side, because of the amount of issues that everybody is having and because it’s happening every week, but we try to prepare for the games thinking that we’re going to play.

“If something happens along the way, it is what it is.”