Arsenal are willing to sell three members of their first-team squad to raise funds to sign the likes of Houssem Aouar, according to Sky Sports reporter Dharmesh Sheth. Lucas Torreira, Sokratis Papastathopoulos and Sead Kolasinac could all soon be on their way out of the Emirates. Mikel Arteta needs to see players head through the exit door or could end the transfer window with more non-homegrown players than he is allowed to name in his Premier League squad.

Torreira is in talks over a loan move to Torino with an obligation to buy for around £22million next summer.

Sokratis is wanted by Napoli and left-back Sead Kolasinac is attracting interest from the likes of West Ham, Roma and Bayer Leverkusen.

Reports claim Arsenal are set to offer over £36m for Lyon midfielder Aouar, though the French club are set to want up to £54m for the 22-year-old.

Sheth says sales will not only raise funds but also free up space in Arteta’s squad, with goalkeeper Runar Alex Runarsson also set to join. 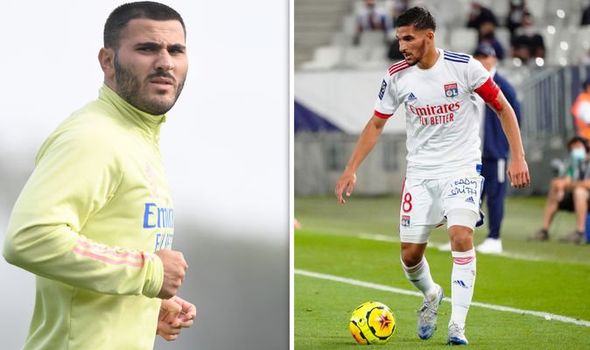 “There’s quite a few [leaving] potentially,” Sheth said on the Transfer Show.

“Lucas Torreira to Torino, that one is edging closer we’re told.

“He would join initially on loan and then that loan would be a permanent deal next summer and the fee would be in the region of about £22m.

“Napoli, they still want the defender Sokratis. Talks are continuing over a fee but Napoli don’t want to pay a transfer fee for a player who is now into the final year of his contract.

“Another player to keep an eye on is the left-back Sead Kolasinac because he is another one that could leave.

“West Ham we’re told are interested, they’re keeping an eye on his situation.

“Now look, if Arsenal can release Torreira, Sokratis and Kolasinac, then they would not only bring in funds to help out Mikel Arteta in the transfer market, but then they would have 15 non-homegrown players over the age of 21 on their books.

“Now the maximum you can have in a squad is 17. That would make it easier to bring in the likes of the Icelandic keeper Runarsson and perhaps another overseas signing.

“Or perhaps even the Lyon midfielder Houssem Aouar as well, which has been banded about a bit.

“So I don’t think Arsenal are quite finished in this transfer window just yet.”

Seven years in the making: How Liverpool missed out on Thiago in 2013

Bold predictions for Week 3 of the college football season