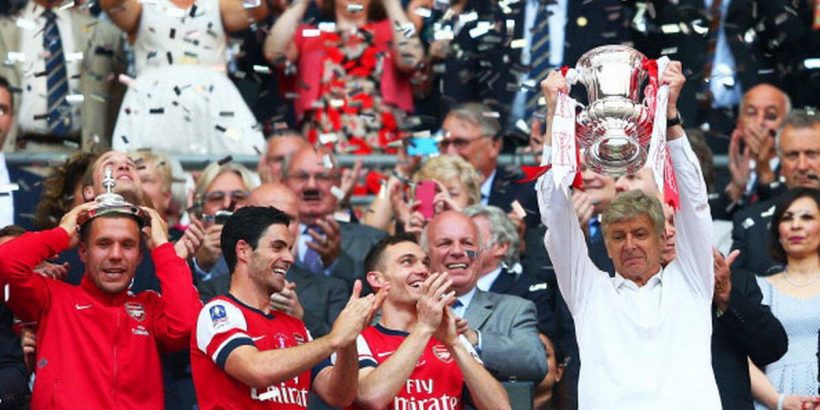 Somewhere in Switzerland, Arsene Wenger will sit down to eat his lunch. Except, the food won’t taste the same, nor will his cup of coffee provide the same boost as it usually might.

Nowadays he works for FIFA as their Global Head of Football, but the legendary Frenchman won’t need reminding that it has been 15 years since he took his Arsenal side to the Champions League final at the Stade de France, only to witness their hopes of winning Europe’s premier club competition go up in smoke.

You can train for weeks, use different scenarios but nothing can prepare you for having to cope for 72 minutes against Barcelona a man short. Yet that was the case when Jens Lehmann was sent off after just 18 minutes after bringing down Samuel Eto’o and on came reserve stopper Manuel Almunia.

Somehow, the 10 men from north London managed to take a shock lead in the first half through Sol Campbell's header. As the old adage goes, they scored too early.

After all, playing against a Barcelona side with world-class talent such as Ronaldinho, Carles Puyol and Samuel Eto’o is one thing. Defending for their lives with a man down is another story.

And sure enough, the Catalan giants fought their way back from the brink with Eto’o squeezing an equaliser under Almunia at his near post with 14 minutes to go. 1-1.

The feeling of belief was sapped from Arsenal like air from a popped balloon and four minutes later, Juliano Belletti repeated the trick on the other side from an acute angle to complete the turnaround.

In the space of four minutes, Arsenal had seen the trophy snatched from their grasp and Barca were trudging up the steps to retrieve their medals.

The problem with being a great manager like Wenger is for all of your triumphs and special moments, there are just as many painful memories. For the 71-year-old, losing the final in his homeland remains the worst he has experienced in football.

“There are many worst [moments], Thierry,” he said to his former striker Henry on Sky Sports.

“Unfortunately, in the career, maybe the Champions League final that we lost. We were 13 minutes away from winning the final.”

They have never even come close to reaching the final since. Looking back, it felt like this was their sliding doors moment.

It was that year, of course, that Arsenal opened their new £390 million home, the Emirates Stadium. Highbury, the centre of all of Arsenal’s greatest triumphs including the Invincibles’ unbeaten season in 2003/04, would become a monument to their past success.

The club were strapped for cash after ploughing significant resources into the new arena, with fans even asked to invest in a 10-year season ticket to help raise funds.

It meant that Wenger had to be shrewd in the transfer market, spending only £13m to sign Tomas Rosicky, Denilson, William Gallas and Julio Baptista (loan) in the summer. Out went Ashley Cole after a controversial swap deal with Chelsea, while Robert Pires left for Villarreal. Another two Invincibles had gone — and the guard was changing.

Wenger’s men failed to adjust to their new surroundings and thus began the start of their demise. They had clinched Champions League qualification again with fourth place, but were dumped out of the competition in the last-16 knockout round. This would become a pattern of the late 2000s under Wenger.

The wait for a trophy was beginning to become more pressing, too. Wenger had guided Arsenal to two Premier League titles and three FA Cups between 2001 and 2005, but Arsenal had yet to celebrate success since moving to their new stadium.

Key player departures no doubt played an important role in their fortunes on the pitch, with Emmanuel Adebayor and Samir Nasri both joining Manchester City, Cesc Fabregas returning to Barcelona in 2011 and Robin van Persie signing for Manchester United. It seemed like Arsenal were simply existing, without achieving anything tangible.

So when Arsenal finally got their chance to lift silverware again against Hull City in the 2013/14 FA Cup final, Wenger was desperate not to let it slip away this time.

But just like that fateful night in Paris eight years ago, Arsenal shot themselves in the foot. They simply had not got going when James Chester and Curtis Davies fired the Yorkshire outfit into a 2-0 lead inside the first eight minutes.

But this time, they were equipped to pull off a comeback of their own. Santi Cazorla’s classy free-kick got the ball rolling before Laurent Koscielny equalised after a huge improvement in the second half from the Gunners.

Aaron Ramsey’s strike in extra-time proved decisive in the end at Wembley and for Wenger, the relief was palpable. Finally, their nine-year trophy drought was over.

"We waited a long time for this and the happiness is linked sometimes with the suffering, and the time that you have to wait,” he said afterwards.

Branded a "specialist in failure" by Chelsea boss José Mourinho earlier in the season, this was Wenger’s chance to snap back.

"This was more important than all the others," said the Frenchman. "We have twice won the double, but [we] were not under pressure then like we were today.

"This is an important moment in the life of this team; to lose today would have been a major setback, but winning gives us a good platform to come back stronger next year.”

While the search for a European trophy goes on, they would secure two more FA Cup winners' medals under Wenger and another under Mikel Arteta in 2019/20.

Perhaps now, he can enjoy his lunch just like any other day.