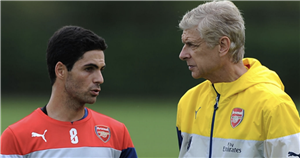 Wenger left the Emirates in 2018 after 22 years in charge though his departure has not seen a change in fortunes.

Despite winning the FA Cup last season, Arteta has guided the north London outfit to their worst-ever start to a Premier League campaign this time around.

Arsenal have picked up just 20 points from their first 16 games and are averaging just one goal per game.

And Wenger, 71, has said he is available to help having won three Premier League title during his time in charge.

Wenger told the Men In Blazers podcast: "If I’m needed, I will help them. But I don’t expect that, no.

"I wish nothing. Time is a good doctor, you know?"

Wenger’s offer comes with the Frenchman having previously suggested Arteta is “lucky” to be in the Arsenal hotseat.

The former Gunners midfielder replaced Unai Emery at the end of 2019 in his first managerial job.

He had previously been Pep Guardiola’s assistant at Manchester City before returning to Arsenal.

In October, Wenger said: "He’s lucky that straight away he got into a big club.

"You normally have to work ten years to get in that position.

"But because he played for the club and was a good player, he got his chance. I wish him well.

"I left the club in a position for my followers to do better and the club now has the financial resources to win the championship.

"Mikel had passion for the game and big motivation, and good focus and a desire to do well.

"You could see the ingredients there, and he had a grip and influence on the other players."