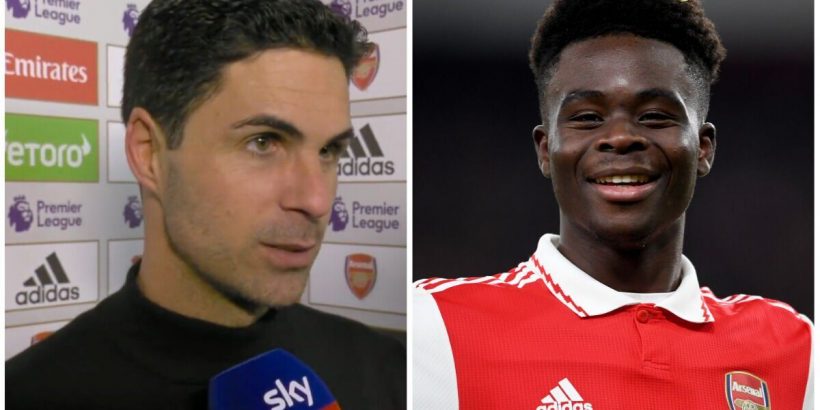 Mikel Arteta refused to reserve special praise for Bukayo Saka after Arsenal’s late 3-2 win over Manchester United despite watching the youngster torment the opposition defence with an outstanding display. The 21-year-old was named man of the match after producing an inflential attacking performance to inspire the Gunners to a crucial win and restore their five-point gap at the top of the table.

Marcus Rashford opened the scoring with a thunderous effort from 25 yards before Eddie Nketiah’s header levelled the game at 1-1 on 24 minutes. That was before Saka scored the goal of the game, cutting inside Luke Shaw before curling a wonderful strike into the bottom corner past David de Gea.

Saka continued to make his England team-mate’s life difficult on the right flank, constantly taking on the left-back and drew a flurry of fouls as Arsenal pressed for a winner after Lisandro Martinez had brought United back on level terms.

It was Nketiah who found the late winner with an improvised heel finish from Martin Odegaard’s cross, but the consensus was that Saka had done the damage by carving United apart time and time again.

However, Arteta refused to acknowledge his contribution after the game, insisting praising his young players as a collective.

“I don’t want to talk about individuals,” he told Sky Sports. “We took the ball and made things happen. They are young but they are confident to do it.”

Despite his earlier comments indicating he did not want to single out Saka, Arteta did comment on the performance of two-goal hero Nketiah, admitting he did not expect the 23-year-old to have such a devastating impact in deputising for the injured Gabriel Jesus.

“What Eddie is doing is incredible. I cannot say we saw that coming,” Arteta added. “We were hoping he could do that because of the way he is, his mentality. Also because of the way that his qualities fit in the team. Losing Gabi was a big blow but Eddie is responding in an exceptional way.”

Saka celebrated his latest achievement after scoring his seventh league goal of the season, which in addition to his seven assists makes him Arsenal’s most influential attacker this season.

And the beaming England international revealed he is oozing confidence during Arsenal’s incredible run.

Arsenal are five points clear of Manchester City with a game in hand after 19 games played and have collected 50 points – the most points at this stage in their history – putting Arteta’s men in pole position to win their first league title in 19 years.