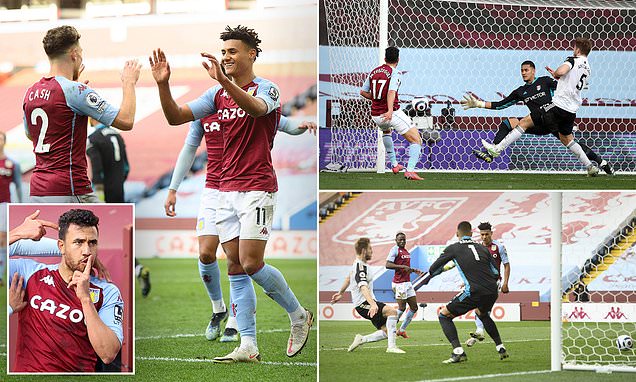 He rose and then they fell. Nothing is ever simple in the adventures of Aleksandar Mitrovic, and nor will there be a straightforward route out of this cave for Fulham.

What a botched chance. What a collapse. What an underwhelming, messy way for Scott Parker’s side to blow an opportunity to draw a few breaths of clean air outside of the bottom three.

They were close, because for 17 minutes, they were safe. Not safe in real, meaningful terms, but safe in the second-by-second existence of this division, and in that context they were briefly leading Aston Villa and up above Newcastle in the table on goal difference. 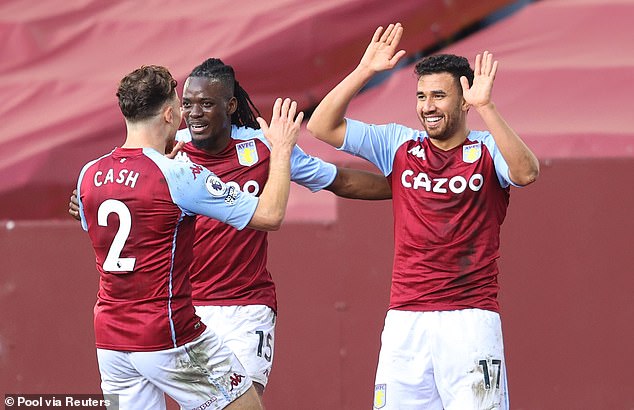 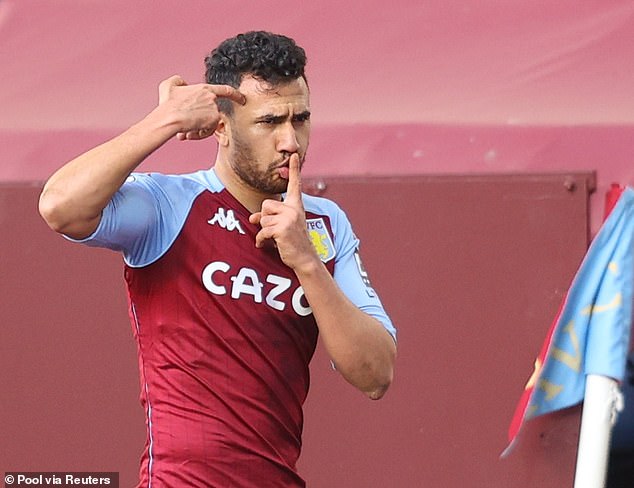 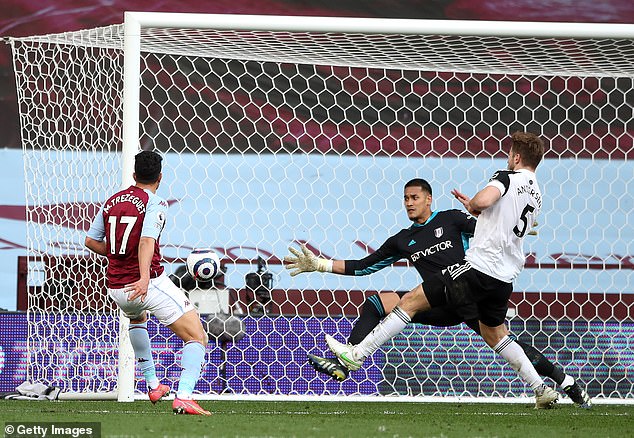 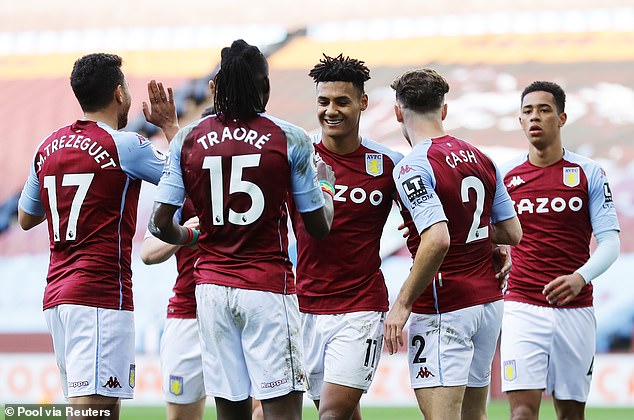 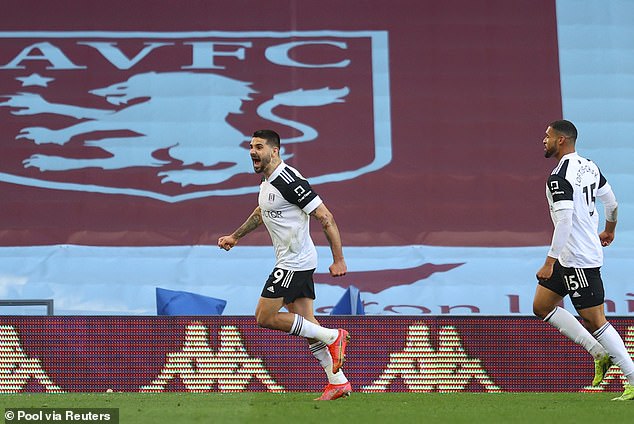 Villa hadn’t turned up. It’s been an issue for a while now and one that has been exacerbated wildly in Jack Grealish’s ongoing absence with a shin injury. He had missed six before this one and only five points and three goals had been collected in that time, so what bad news for Dean Smith that he had suffered a minor reaction in training on Saturday and would miss this one, too. Without him, they offered very little.

But then, from nowhere, this game took a funny turn. With 78 minutes played, Trezeguet equalised, and by the 81st he had Villa ahead. A goal for Ollie Watkins made a comfortable win out of a troubling performance, and a second victory in eight. They might now look to a belated, unlikely European push; with Fulham suffering a third straight defeat, Parker’s chances of a happy ending are dwindling fast.

With Grealish out, Smith made only a single change to the side beaten by Tottenham before the international break. That saw Trezeguet replaced on the left of Villa’s striking three by Anwar El Ghazi, with the hope that some of the attacking deficit created via Grealish’s absence might be compensated by the inclusion of a player with six goals this season. 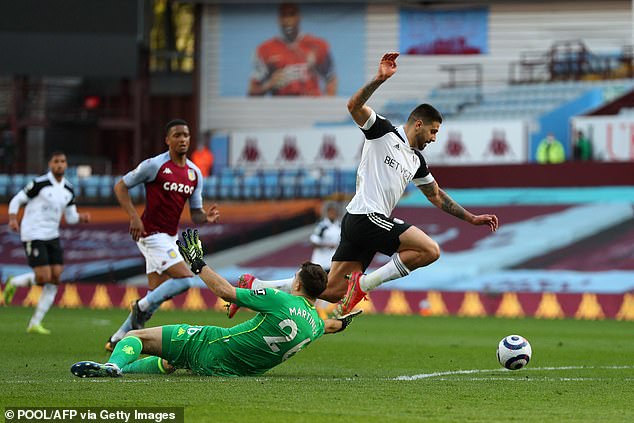 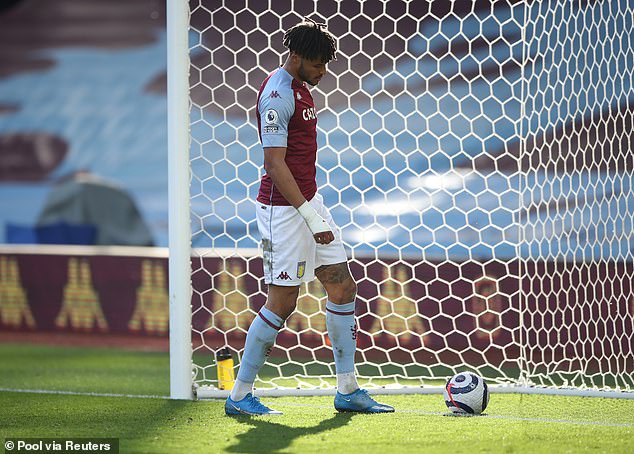 Parker’s big call was to bring in Mitrovic for a first start since early February. Five goals in three games on his adventures with Serbia no doubt forced the issue, and what the team gained was a striker puffed up on confidence.

Indeed, his first telling contribution was to attempt a shot from close to halfway – scuffed, as it happens – and within the opening 10 minutes he had launched two further assaults on goal and also appealed for a penalty against the grappling of Tyrone Mings. Fairly frenetic stuff, and indicative too of Fulham’s strong start to this game, which included Bobby De Cordova-Reid botching a free header.

Villa, for their efforts, managed one decent early chance via a Matty Cash delivery, but Ollie Watkins fluffed his control in front of goal when a quick shot looked the smarter option. Douglas Luiz had an equally good opportunity, again created from a Cash cross, but he miscued the header.

By half an hour, what had been a promising match had settled into more of a trudge. For Villa, the inescapable and entirely worthless lament in all that centred on the impact Grealish might have had on a game like this. In all circumstances, their play flows so much better when he is there to weave his patterns; against opposition like Fulham, who can leave so much room at the back, he could have thrown a brilliant party. At the very least, his absence left Watkins in frustrated isolation, un-serviced and often too far beyond the edge of the action.

The striker’s single notable contribution to the first half was to win a penalty against Mario Lemina, only for it to be overturned. Andy Madley initially gave the foul in the belief that Watkins touched the ball fractionally before Lemina’s lunge and contact, but after being referred to the pitchside monitor the referee reversed his decision. 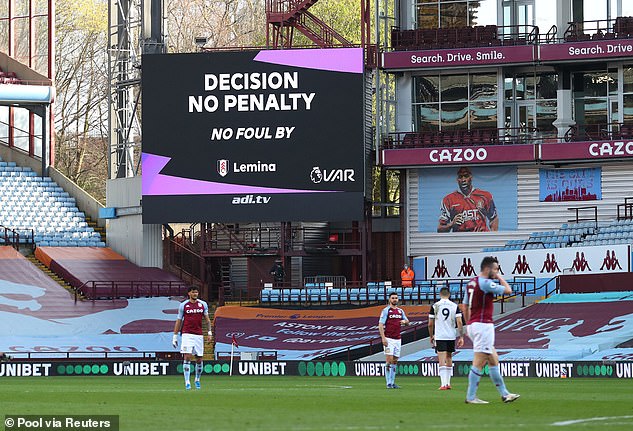 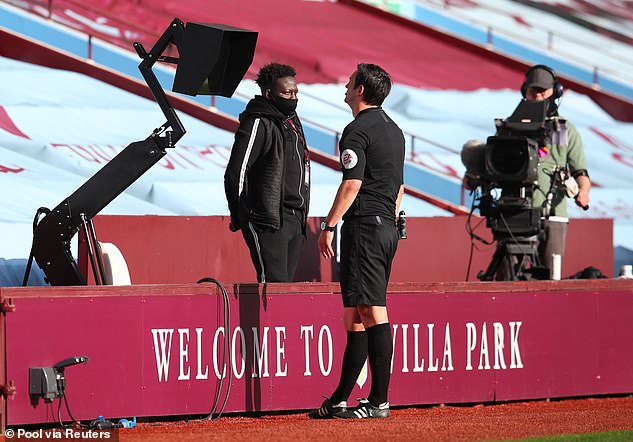 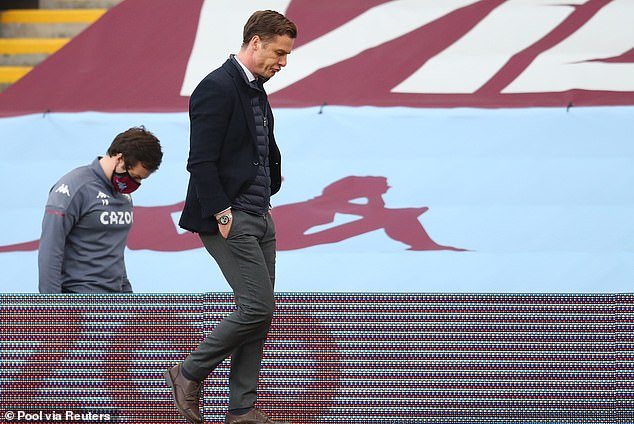 The breakthrough, scored around the hour, came from a pair of Villa mistakes. In the first of those, Morgan Sanson was closed down and lost possession under pressure, but the key phase came after Ezri Konsa collected the loose ball and rolled short to Mings. From there the centre-half tried to roll back to Emiliano Martinez but scuffed the pass, allowing Mitrovic to intercept, round the keeper and finish.

Harrison Reed bent a shot a little wide as they pushed for a second, but how quickly and painfully this all changed.

The warning came when Trezeguet wasted a header, but barely a minute later Mings found the Egyptian near the edge of the area, and without taking a touch he picked out the bottom corner. It was his first goal of the season. His second came with a volley from a Keinan Davis cross three minutes later.

Watkins tapped in a third four minutes from time after strong word from Bertrand Traore.

RE-LIVE ALL THE ACTION FROM VILLA PARK

Three points for Aston Villa who came from behind after Fulham took the lead in the 61st minute. Trezeguet’s double turned the game on its head before Ollie Watkins added a third late on. Fulham remain in the bottom three while Villa climb to ninth.

90+1 – A great chance for Onomah to pull one back as space opens up for a shot but his effort is straight at Martinez.

86 min – GOAL! Watkins makes it 3-1! Traore goes past Aina easily and picks out Watkins for a tap-in. The comeback is complete.

85 min – Into the final five minutes of normal time. Villa are more likely to add to their goals.

82 min – Two subs for Fulham as Maja comes on for Loftus-Cheek and Onomah replaces Lemina.

81 min – GOAL! Trezeguet puts Villa ahead! It’s another mistake as Tosin gets caught in possession by Davis. His ball to the back-post finds Trezeguet and he makes no mistake.

77 min – GOAL! There’s the equaliser and Mings is involved as he sets up Trezeguet. The defender gets down the left and his pass across the box finds Trezeguet who fires into the bottom left corner. A lovely finish from the substitute.

76 min – A chance for Trezeguet but he gets his header all wrong and his effort goes well wide.

74 min – A final change for Villa as Ramsey replaces Traore.

61 min – GOAL! Mitrovic gives Fulham the lead! Tyrone Mings has his head in his hands. The defender tries to pass the ball back to Martinez first time but gets it all wrong. The ball is intercepted by Mitrovic and he shows composure to round Martinez and finish into an empty net. That could be a huge moment for Fulham!

52 min – De Cordova-Reid has a long range effort but it’s comfortable for Martinez to deal with.

48 min – Tete’s ball in finds Mitrovic but his header is tame and is easily gathered by Martinez.

47 min – Early blow for Fulham as Lookman is forced off with an injury. Cavaleiro comes on.

Aston Villa kick-off the second half. No changes for either side at the break.

In case you were feeling old…

Well, a bit of drama to end the half there. Andy Madley awarded Villa a penalty on the stroke of half-time after Lemina brought down Watkins but he was instructed to go and have a look at the monitor. The referee then decided Lemina had got a touch on the ball and changed his mind. Other than that it’s been a game of few chances. 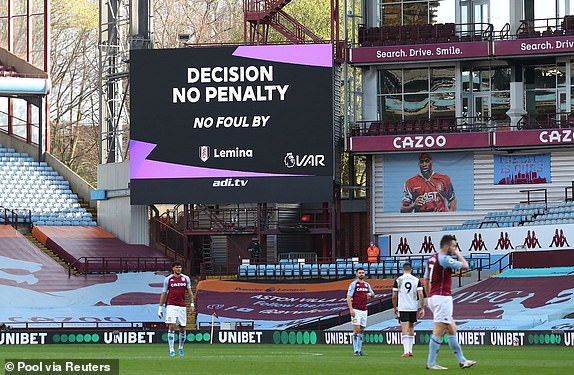 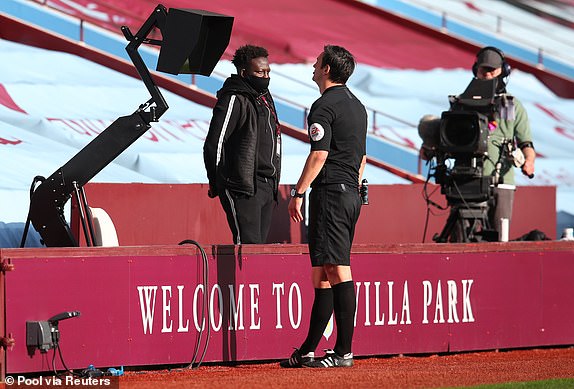 Andy Madley goes over to the monitor and decides Lemina did get a touch on the ball. No penalty.

44 min – Cash’s ball in is easily gathered by Areola. Fulham have given away a lot of free-kicks but they’ve defended them well so far.

43 min – Areola punches the free-kick away but Fulham concede another free-kick for a handball against Reed.

42 min – Traore wins a free-kick on the right wing after a challenge from Lookman. A chance for Villa as we approach half-time.

40 min – Sanson is down receiving some treatment after that earlier coming together with Lemina. It looks like he wants to run it off but Makamba is stripped and ready to come on.

38 min – Lemina concedes another free-kick on the left wing as he brings down Sanson but Loftus-Cheek heads away Targett’s ball in.

35 min – Martinez misses the cross as he comes out for it but Anderson isn’t able to turn the ball in at the back post.

34 min – Another free-kick for Fulham on the right wing for Lookman to swing in as Sanson is penalised.

31 min – Good ball in from Lookman but Martinez is out quick ly to punch it away under pressure from Adarabioyo.

30 min – A game of few chances so far but Fulham have a free-kick on the left and a chance to put the ball in the box.

24 min – Villa work a short corner out to Cash and his ball into the box picks out Luiz. He connects well but his header goes well wide. That was a half decent chance.

20 min – Anderson’s loose pass is intercepted by Sanson who drives forward into the box but Tete sticks out a toe to make a vital challenge.

19 min – The ball bobbles around in the area before Reed clears but only as far as Traore, who managed to win a corner.

19 min – Free-kick for Villa on the right hand side with Cash standing over it.

15 mins – Another yellow card as Anderson blocks off McGinn.

14 mins – First booking of the game as Luiz brings down Loftus-Cheek, who was bursting forward. Free-kick for Fulham.

9 mins – Great run from McGinn as the midfielder bursts forard from midfield. He gets into a shooting position but his effort goes high and wide.

7 mins – Mitrovic is fired up today and the striker hits another shot at Martinez. The ‘keeper pushes it round the post for a corner.

6 mins – Mitrovic is fuming, the striker is convinced he was fouled by Mings as he goes to head Lookman’s cross. The forward then has another header that goes just wide.

3 mins – Mitrovic has the first shot on target as he tests Martinez from just outside the box. Comfortable stop for the Villa ‘keeper.

2 mins – Early chance for Watkins as a cross from the right finds him in the box but he can’t control the ball and it runs through to Areola.

Fulham get us underway at Villa Park

Five minute warning. Kick-off at Villa Park will be upon us shortly.

Dean Smith tells Sky Sports that Jack Grealish pulled out of training on Saturday with some ‘discomfort’. The Villa boss says they have ‘aired on the side of caution’. 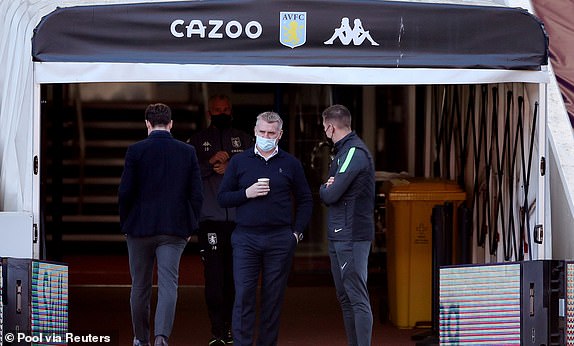 The players are out on the pitch at Villa Park. 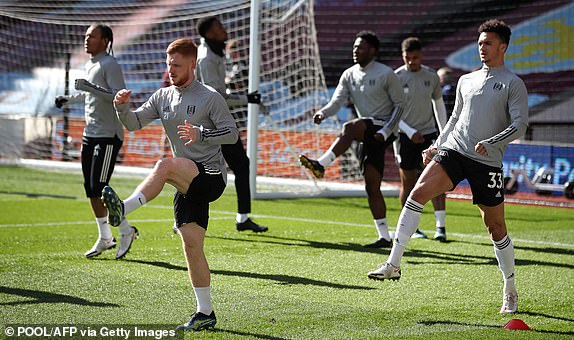 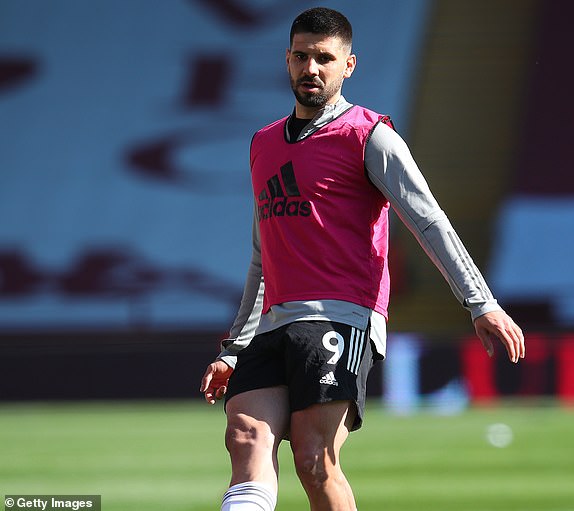 News of that late equaliser for Newcastle will have put a dampner on things for Fulham but they can still climb out of the bottom three with a win at Villa Park. That would put them level on points with the Magpies but with a better goal difference. 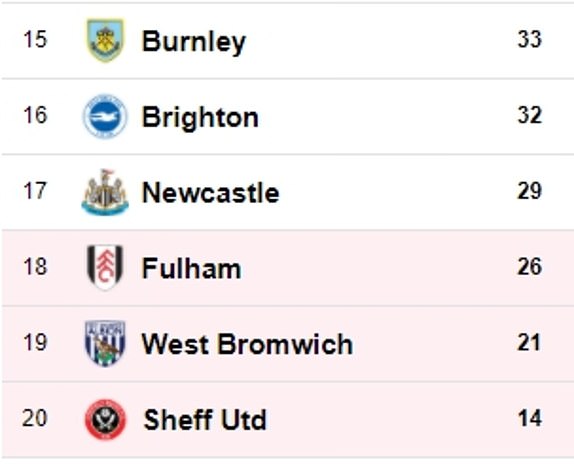 Villa beat Fulham 3-0 at Craven Cottage back in September but Scott Parker’s side are much improved since then. 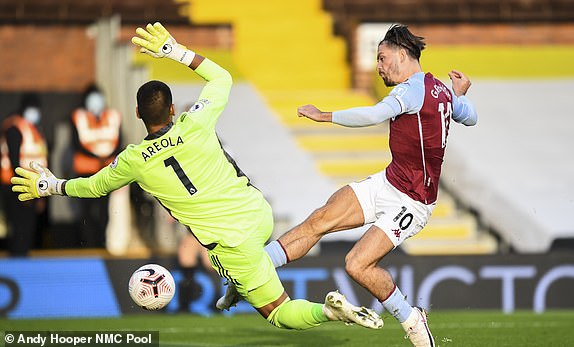 Villa have managed one victory since their captain picked up his shin injury, a 1-0 win over Leeds. Since then they have lost against Sheffield United and Tottenham and drawn with Wolves and Newcastle. Smith said earlier this week that he was hopeful of Grealish returning this weekend.

Villa were hoping to have their captain back in the squad today but there’s no place for Jack Grealish on the bench… which is a huge boost for Fulham. Dean Smith’s team have managed just one win without their skipper.

Good afternoon and welcome to our live coverage of Aston Villa v Fulham! It’s a big game for the visitors who can climb out of the bottom three with a victory., if Newcastle fail to come back against Tottenham.