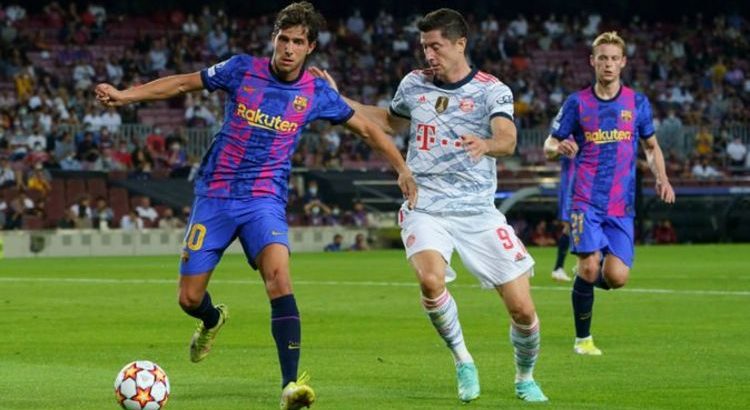 Barcelona’s new era got off to a horrific start on Tuesday night with a 3-0 home mauling by Bayern Munich, angering much of the home crowd in the process.

In their first season in 17 years without superstar Lionel Messi, Barcelona couldn’t really turn to a world superstar.

They have the likes of Memphis Depay, Sergio Aguero and Ansu Fati, but when the going gets tough there wasn’t really anyone to stand up and be counted.

That can be said for all the side, but there was one player especially who had a hard time from Barcelona fans – long-serving player Sergi Roberto.

Roberto joined La Masia at the age of 14 from neighbours Gimnastic, and has featured in 308 games for the Blaugrana since his debut aged just 18.

JUST IN: Leeds given green light to revive £25.5m transfer as agent speaks out

But the 29-year-old was in the firing line from fans yesterday following a poor performance – with the Spain international reportedly crying in the changing rooms after receiving jeers from his own fans.

The stalwart started at right-back yesterday, but after being ganged up on by Leroy Sane and Alphonso Davies, he never got any breathing space which was a massive contribution to their downfall.

The actions of the Barcelona fans hurt not only Roberto, but his team-mate Gerard Pique too.

Acknowledging one of his longer-serving team-mates, Pique condemned the Barcelona support for booing a player who has done so much for them in the future.

“It hurts me a lot personally because I know this person, he’s a spectacular human being and he loves this club more than anybody,” Pique said to Movistar.

“I’d like to remind people also that he’s not a full-back.

“He’s a central player, a midfielder. He’s made a sacrifice to play this position and he’s done it phenomenally many times.

“It hurts a lot but the people are free to voice their opinions but if you ask me personally, it hurts a lot.”

With the Spaniards going head to head with the third best team in the group in the Portuguese capital, Ronald Koeman won’t be able to slip up with his job on the line.