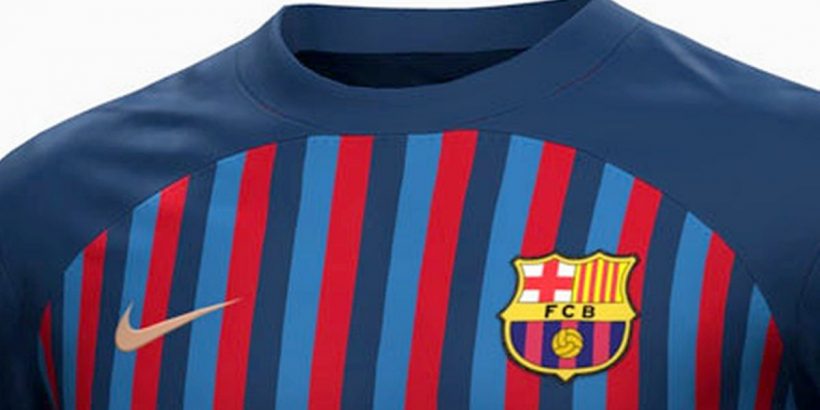 Leaked pictures of Barcelona’s proposed kits for the 2022/23 season has been greeted with mixed emotions by fans.

The photos on social media show what the Catalonian club could be wearing this time next year.

Some fans of the La Liga club have criticised Nike for their designs in recent times, including the new Champions League home jersey which was released last week.

If the rumours are to be believed, next season’s kit will see a complete change in approach.

The top will have much tighter stripes, of light blue, dark blue, and red.

Meanwhile, the sleeves, shoulders and back will be entirely navy.

On social media some fans have been left dissatisfied by this possible new kit.

One wrote: “The effort to have the ugliest shirts in world football has to be recognised. The idea is terrible, with the exception of the badge, nothing reminds me of the club. This seems to be the path they have chosen, the new identity is to have no identity.”

Another said: “First impressions, this is just so default and uninspired. Fan made concept kits are far better than this.”

Others believe the idea has some potential and could be a good shirt give a few tweaks.

They wrote: “The idea is good, but I believe more work needs to be done.”

Would you like to see Barcelona wear this kit next season? Let us know in the comments section.

Some people on Twitter even liked the new design and are hoping it will get confirmed.

One wrote: “This will be one of the most beautiful kits I have ever seen.”

Another agreed: “Looks class, with a touch of a late 90s shirts. Love that dark blue on Barca kits.”

Images have also been leaked of Barca’s potential away kit as well.

This is a much simpler design, with the kit entirely gold with a few diagonal lines running across the front.