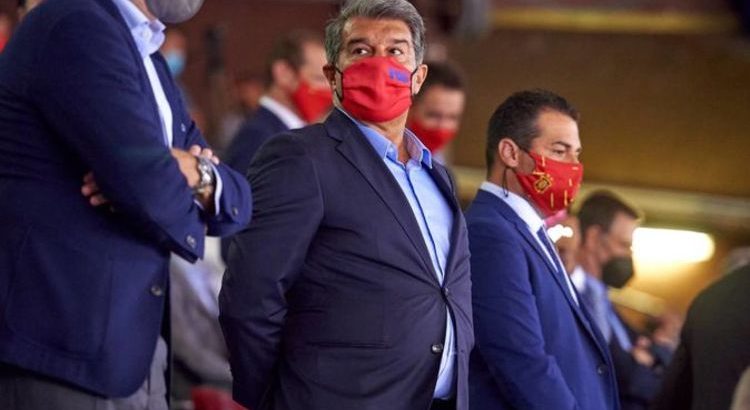 Barcelona president Joan Laporta had a dream XI in mind when he was appointed as the head chief at the club earlier this year. However, the finances at the Nou Camp have strapped the Spanish giants in this transfer window.

Barcelona voted in Laporta to become their new president in March earlier this year and he had big plans for the transfer window.

But, much more urgently, the former politician has had to sort out the financial mess at the club.

Even before the pandemic, Barca were facing mammoth bills that left them staring into the abyss – following huge transfer fees for Phillipe Coutinho, Antoine Griezmann, Ousmane Dembele and Frenkie de Jong.

When Covid stormed through football and prevented fans from entering stadiums, there were not many harder hit than the Nou Camp.

It has left Barcelona nervous in the transfer window with several players up for sale, though the first hurdle has been cleared in keeping Lionel Messi.

But it has not stopped the Spanish giants from signing stars with Eric Garcia, Memphis Depay and Sergio Aguero joining on free transfers.

However, had Laporta had his way, there would have been three more massive signings.

The first would have been Georginio Wijnaldum, who had been destined to sign throughout the season last term after contact from Ronald Koeman.

But at the last moment, the Dutchman penned a deal with Paris Saint-Germain – who blew Barcelona out of the water with their offer.

The second would have been Matthijs de Ligt, who is coveted by everyone at Los Cules from the boardroom to the manager, but Juventus are not prepared to entertain offers for the centre-back.

While the final arrival would have been the biggest in Erling Haaland – who scored 41 times last season – and is wanted by nearly everyone in Europe.

As it stands, a move to the Premier League might be more viable due to the finances there but Mino Raiola significantly first spoke to Laporta over a potential transfer.

It means that Barcelona are still held in high regard as for a potential deal – though any chance of a transfer this summer is almost zero.