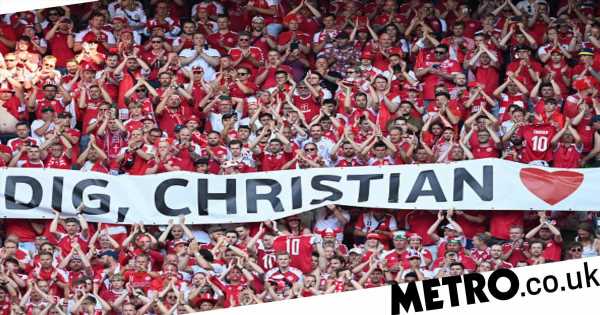 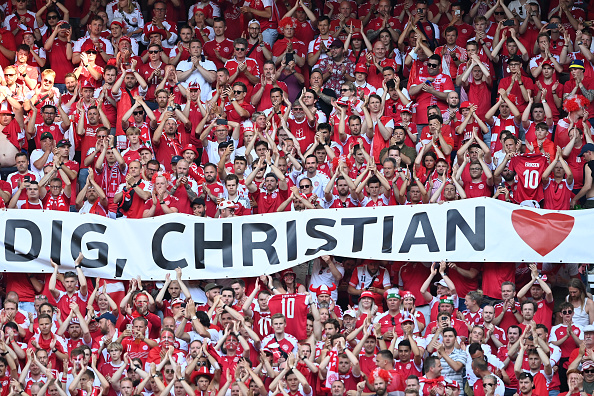 Belgium and Denmark stopped in the 10th minute of play in their Euro 2020 clash to applaud Christian Eriksen as he recovers from a cardiac arrest.

Players, coaches, staff and fans alike rose to celebrate the recovery of the midfielder after Saturday’s distressing scenes.

Fans in attendance at the Parken Stadium unfurled a banner reading, ‘the whole of Denmark is with you, Christian’.

The Danes had already taken the lead after a thrilling start to the contest with Yussuf Poulsen drilling home from the edge of the box inside two minutes with Jason Denayer at fault.

Eriksen, who wears the no10 shirt for Denmark, collapsed during his country’s opening group match against Finland on Saturday in Copenhagen.

He was given emergency CPR on the pitch as his teammates formed a human screen around the Inter Milan star before being taken to hospital where he was declared to be in a stable condition.

The 29-year-old has since undergone a series of tests to determine the exact cause of his cardiac arrest with the former Tottenham star giving fans a thumbs up from his hospital bed in a reassuring update on Tuesday morning.

Belgium striker Romelu Lukaku was one of the first to send his support to his Inter teammate Eriksen on Saturday evening, shouting ‘Chris, I love you,’ down the camera after scoring against Russia hours after the incident.

Lukaku revealed plans for Belgium and Denmark to stop play and celebrate Eriksen in a press conference on Thursday.

‘After 10 minutes of the match, we will put the ball in touch to applaud,” Lukaku said. “Several players from our country have played with him but we will be there to win and that is the most important.’