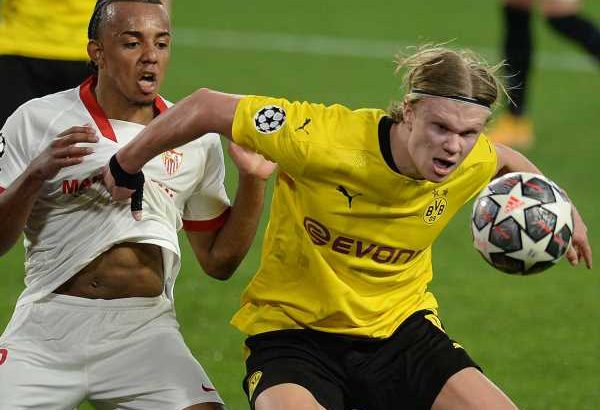 Borussia Dortmund take on Sevilla in the second leg of the clubs’ Champions League last-16 tie this evening.

The first leg was a thrilling clash, with Dortmund triumphing to take a 3-2 aggregate lead into tonight’s game. Erling Haaland netted two of the German team’s crucial away goals, while Luuk de Jong’s late strike for Sevilla gives the La Liga outfit a genuine chance to progress to the quarter-finals.

But Sevilla, who qualified for this season’s edition of the tournament by winning the Europa League last term, enter this second leg in poor form. Julen Lopetegui’s side have lost three of the four games they have played since the reverse fixture with Dortmund, who have won three of their four matches since the first leg.

BVB’s only defeat in that run was in their most recent outing, in which they were 4-2 losers against Bundesliga leaders Bayern Munich.

Here’s everything you need to know about tonight’s Champions League clash.

The game will kick off at 8pm GMT in Dortmund, Germany.

The match will air live on BT Sport, with subscribers also able to stream the action live on the broadcaster’s website and app.

Axel Witsel and Marcel Schmelzer remain out for Dortmund, with the injured Manuel Akanji also set to be absent here. Giovanni Reyna, Jadon Sancho and Raphael Guerreiro all missed the defeat by Bayern, and their availability this evening is up in the air.

Aleix Vidal will miss out for Sevilla, meanwhile, though Jules Kounde and Yassine Bounou could return for the Spanish side.

Dortmund aren’t always the best at holding their nerve in moments like this, but if Haaland turns up they should secure safe passage past Sevilla. Dortmund 2-1 Sevilla (5-3 aggregate).