‘Twenty-one? That’s too many… I should have won more’: Brendan Rodgers admits he should have had less defeats as he brings up 100th victory as Celtic boss at Dundee

Brendan Rodgers celebrated his 100th victory as Celtic manager – and then said he should have won even more games.

Rodgers saw his side thump Dundee 5-0 at Dens Park, a result that takes the Double Treble to within four points of leaders Hearts.

‘I didn’t know it was my 100th win,’ said the former Liverpool boss. Someone just told me there. We should have had more! 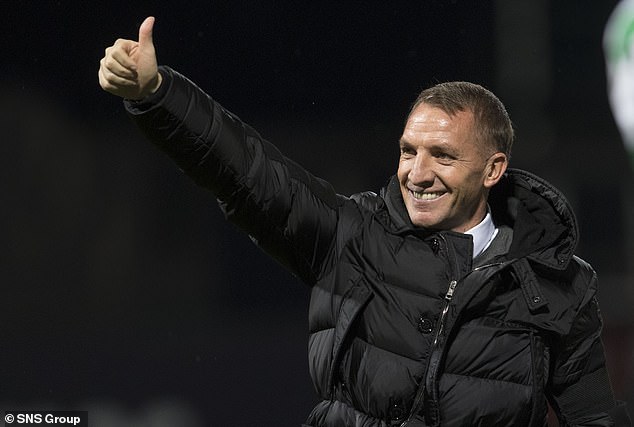 ‘How many games have I had? 144? How many losses? Twenty-one? That’s too many. I should have won more.

‘I’m always proud to manage the club. My job is to give the fans as many wins as I can. We need 101 now.’ Celtic absolutely buried Dundee, with five different players finding the net, Rodgers saluting his players for carrying on the momentum from their Sunday semi-final battering of Hearts at Murrayfield.

‘I said to the players there were two things we needed to show – the hunger and the humility,’ he revealed.

‘You can come off the back of a semi-final, into a game away from home, not 60,000 supporters, think it will be easy.

‘We showed humility to win the game – and hunger to win by as many as we can.

‘We played very well. The team was very cohesive in our pressing creativity, played to really high level technically.

‘We also showed the level of our fitness, that ability to pass and move. You need fitness for that.

‘Coming off the back of a really tough game at the weekend, it was a great demonstration. 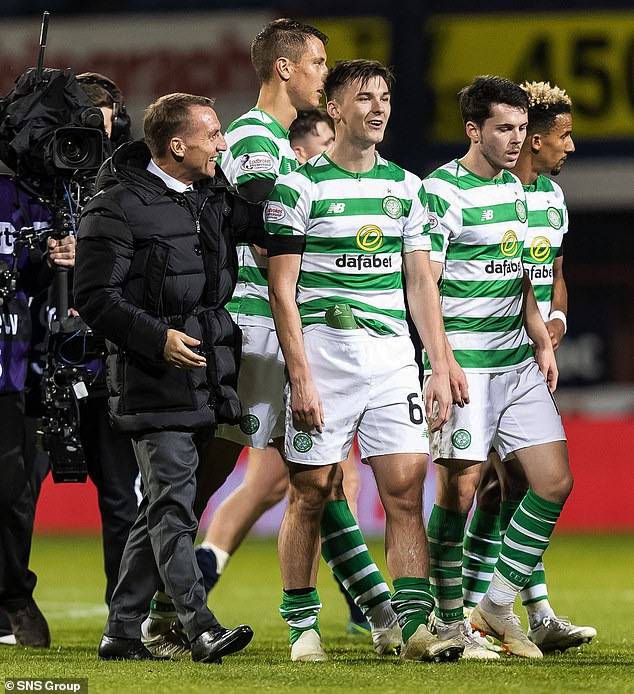 Rodgers saw his side win 5-0 at Dens Park, a result that takes them within four points of Hearts

‘The combination play was good. We were a little bit too stretched at the beginning.

‘But we started to find the gaps and that allowed us to make those moves in behind. That’s important when teams sit deep.

‘We pressed without the ball and, when you have it, some of the goals were real quality.

‘I tend to want goal scorers on the pitch, as many as I can. Five different scorers showed it was working.

‘The concentration has been on getting back to our level. We’re right in the flow now, in terms of goals and creativity.

‘For me, it starts with our pressing. You see the intensity of that is much better. And we know we’ve got quality.’ Australian teenager Daniel Arzani, a second-half sub, was stretchered off with a knee injury late on, Rodgers saying: ‘Arzani is a great boy and it’s unfortunate he picked up the injury with a run in the game.

‘I think his knee just sort of gave way and he felt it a bit unstable. 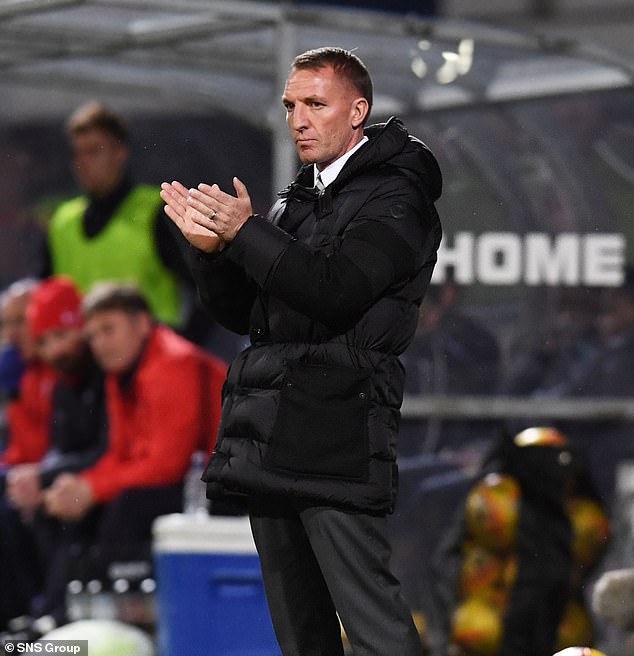 ‘He was taking the applause on the way out, so I’m not sure how sore it was! The only boy to be on a stretcher on his side. I don’t think it was killing him!’ Dundee boss Jim McIntyre summed up his team’s performance with two words, saying: ‘Too passive.

‘That’s what I would say. Our game plan was to make sure we sat off Celtic in their half and try to play counterattack.

‘But we had to make contact in their half. Tom Rogic’s goal, we gave four or five yards away – that’s too much with his quality. We’ve got to have contact on the ball.

‘The second goal is not a penalty. But we don’t even claim.

‘Two of the next three goals were just midfield runners.

‘We’re a bit fragile with the confidence levels. Nobody is going to help us.’