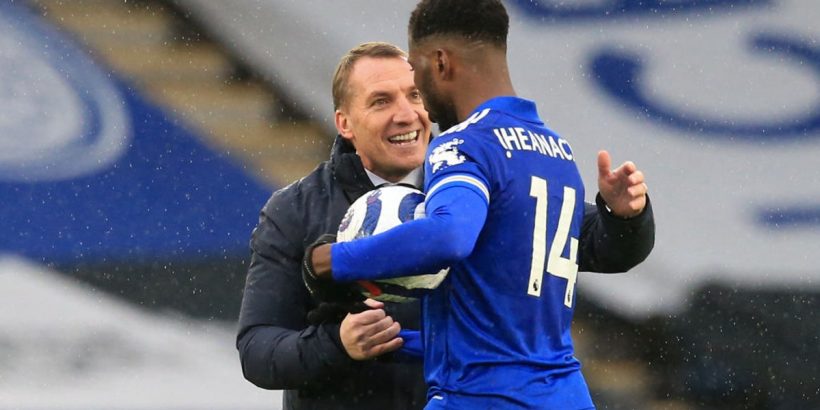 Brendan Rodgers stated his pleasure at leading Leicester City to their first FA Cup semi-final in 39 years and praised the form of Kelechi Iheanacho, after his strikes helped knock out Manchester United.

The Foxes triumphed 3-1 in the quarter-finals, with Iheanacho scoring twice and Youri Tielemans notching the other, after Mason Greenwood had equalised for the Red Devils before half-time.

A brace for the 24-year-old means it’s nine goals in as many appearances across all competitions and, while the manager was keen to laud the performance level of the entire team, Iheanacho’s recent strike rate was the main talking point post-match.

“I’m delighted. It was a great team performance in every aspect. We showed the calmness and courage to play our game against one of the best teams and we thoroughly deserved it,” Rodgers told BBC Sport.

“He’s always contributed, if he comes off the bench maybe confidence is lower but he’s always committed. The guy’s playing the shape very well, his touch and movement without the ball is at a very high level.

“It’s a different structure. The players know the systems, they are intelligent and interpret play well. Kelechi is better when he has someone up there with him and the combinations are working very well.”

Partnering Jamie Vardy, Leicester have moved to a two-man strike pairing to make up for the loss of James Maddison and Harvey Barnes, with both creative outlets currently injured – as well as wing-back James Justin.

The change in formation hasn’t led to a drop-off in Leicester’s overall performance level or style, which the manager was delighted to see pay dividends as United were pressured into mistakes at the back and unable to create enough chances in attack.

“You’re playing against a top-level team and know you’ll have moments of pressure, but our solidity and intensity of press was very good.

“All round, to beat Man United 3-1 you have to be complete in all aspects of your game and we did that.

“[The final is] a way off yet. Southampton will be a really tough game when it comes but we’re on the right path, we’re ambitious to be the best we can be. Performances like tonight bodes really well for us going forward.”