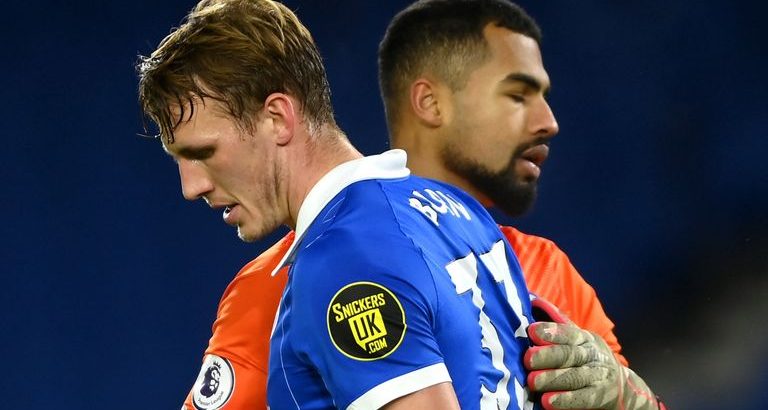 Team news and stats ahead of Brighton vs Newcastle in the Premier League on Saturday (kick-off 8pm).

Brighton could have Dan Burn and Aaron Connolly available for the visit of Newcastle.

Defender Burn went off against Southampton last weekend as a precaution with a hamstring issue and striker Connolly is back in training after a cracked rib.

Newcastle striker Miguel Almiron could make the squad after returning to training this week.

The Paraguay international has missed the last two games with a knee injury and will be assessed as head coach Steve Bruce considers his options.

Fellow frontman Callum Wilson (hamstring) is also back on the grass, but the game will come too soon for both he and Allan Saint-Maximin (groin), while defender Fabian Schar continues his recovery from a knee problem.

Brighton vs Newcastle will be shown live on Sky Sports Premier League and Main Event from 7.30pm; kick-off 8pm. Sky Sports customers can watch in-game clips in the live match blog on the Sky Sports website and app. Highlights will also be published on the Sky Sports digital platforms and the Sky Sports Football YouTube channel shortly after the final whistle.

Pitch to Post Preview – Brighton vs Newcastle assessed. Plus: How will Spurs respond to their Europa League shocker, and will West Ham boost their top-four chances against Arsenal?

In this week’s Pitch to Post Preview Podcast Sky Sports News’ Elliot Cook and Keith Downie join Peter Smith to look ahead to a crucial clash in the battle against relegation, which sees Brighton host Newcastle on Saturday night. From analysis of what’s gone wrong this season, to tactics for this clash, and what defeat would mean for both managers, we have the ultimate lowdown on this pivotal game.

We also have the latest on Arsenal, following their progress to the quarter-finals of the Europa League, and ask Sky Sports football journalist Ron Walker whether West Ham can topple their London rivals.

Plus, Sky Sports football journalist Charlotte Marsh reacts to Tottenham’s disastrous defeat to Dinamo Zagreb and discusses whether Jose Mourinho’s side can salvage their season domestically, starting with a tricky trip to Aston Villa.