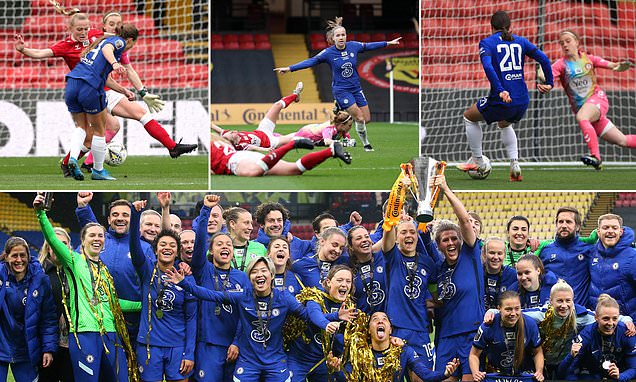 One trophy down, three to go for Chelsea and Emma Hayes. Their 6-0 victory over Bristol City in the Continental Cup final on Sunday means the possibility of a quadruple is still on the cards.

There are greater prizes on offer for this team, with the WSL title and Champions League at the top of the priority list, but Hayes and her side want to win every piece of silverware that’s on offer.

That is the culture the Blues boss has built since joining the club in 2012. This is her ninth trophy and there’s every chance she’ll reach double figures by the end of the season. 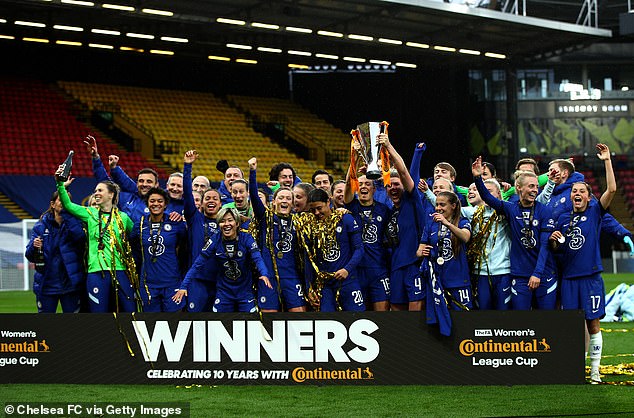 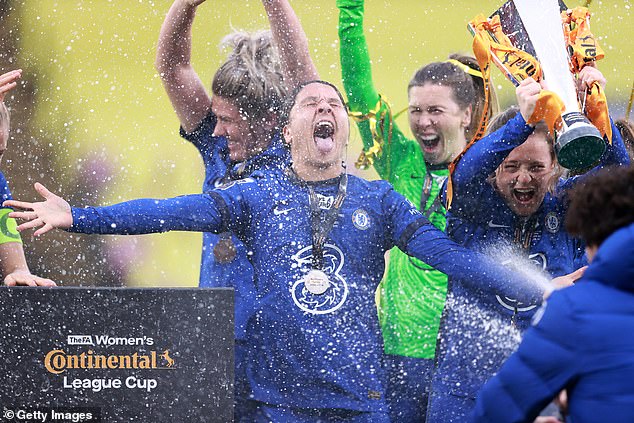 Blues star Sam Kerr netted a hat-trick at Vicarage Road, including two in the first 10 minutes 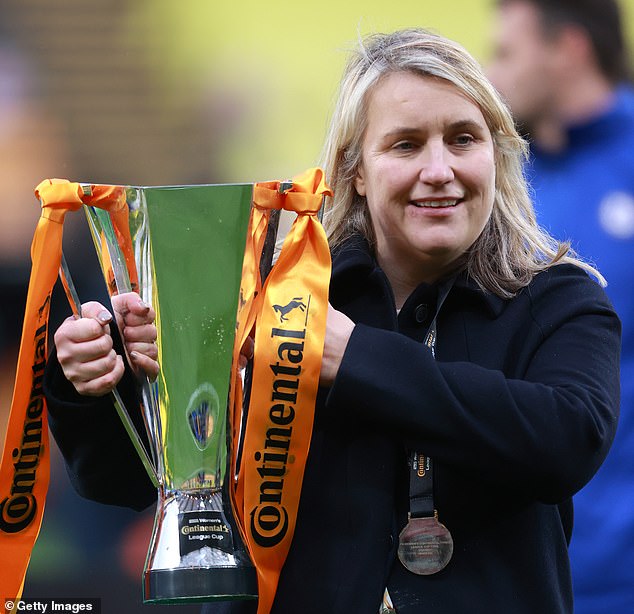 ‘This is the business we’re in, winning is what everyone competes for,’ said Hayes.

‘You can’t do the same things you did before so you have to keep adding. As long as the group are conscious of what they need to do to accumulate, there’s no reason we can’t be in and around those places to challenge (for more).’

There are bigger challenges for the Robins too, who are in the thick of a relegation fight. Matt Beard was brought in as a temporary replacement for Tanya Oxtoby, who went on maternity leave in January. There have been marked improvements since his arrival and he has managed to lift them off the bottom of the WSL table.

This, however, proved a step too far. The coach referenced Wigan’s 2013 FA Cup victory over Manchester City as a source of inspiration in his pre-match press conference. 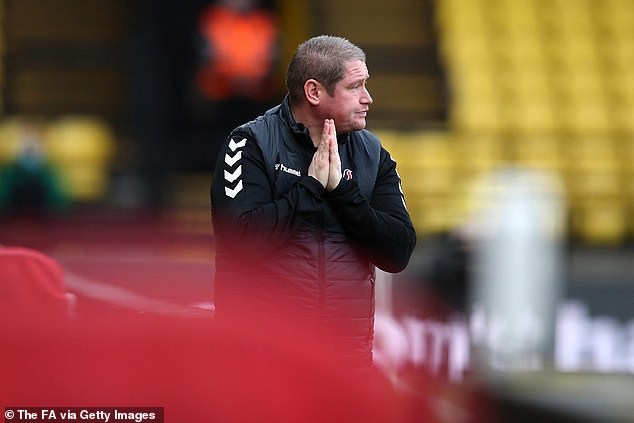 But as Chelsea raced into a 2-0 lead inside 10 minutes, this was reminiscent of Watford’s 6-0 defeat by Pep Guardiola’s side in 2019 – fittingly taking place at Vicarage Road.

Both goals were scored by Sam Kerr and created by Fran Kirby. The first came in under 90 seconds, Guro Reiten playing Kirby in down the right who cut the ball back to Kerr for a tap-in.

The Robins struggled to get out of their own half and gifted Chelsea their second when Yana Daniels was caught in possession by Kirby, who slipped in Kerr to finish smartly past Sophie Baggaley.

The Australian was guilty of missing a number of chances in the Community Shield back in August but she was clinical here, and even brought out her signature back-flip celebration. 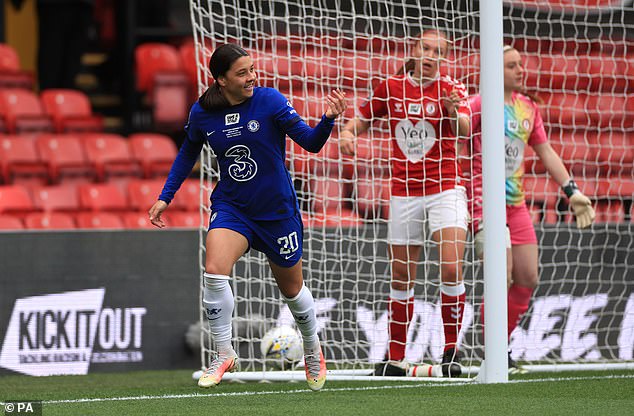 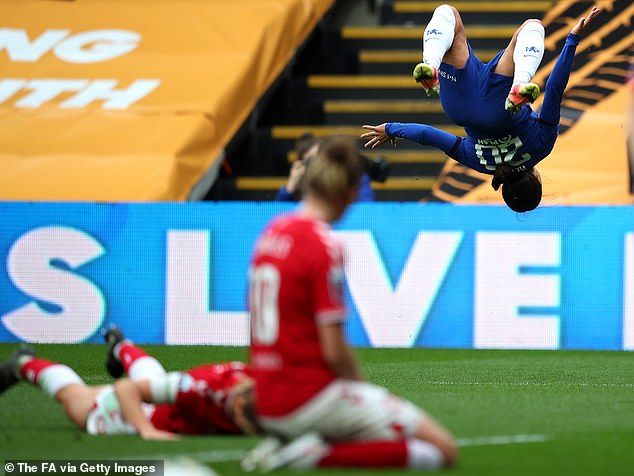 Kirby got on the scoresheet herself in the 29th minute as Bristol City were the constructors of their own downfall again. Baggaley’s clearance went straight to Kirby who took a couple of touches before producing a 25-yard chip over the helpless goalkeeper.

The forward, who lost her mother to a brain haemorrhage in 2008, pointed to the sky in celebration. It was fitting that she picked up the player of the match award on Mother’s Day.

It was only a matter of time before she or Kerr scored their hat-trick and it was the latter who ended up getting her hands on the match-ball.

Blues goalkeeper Ann-Katrin Berger released Kirby down the left and she played a one-two with Reiten before setting up Kerr for a tap-in once again.

There was still time for Kirby to claim another assist, her fourth of the afternoon, before leaving the field, this time setting up Reiten for a close-range finish as she made it 6-0. 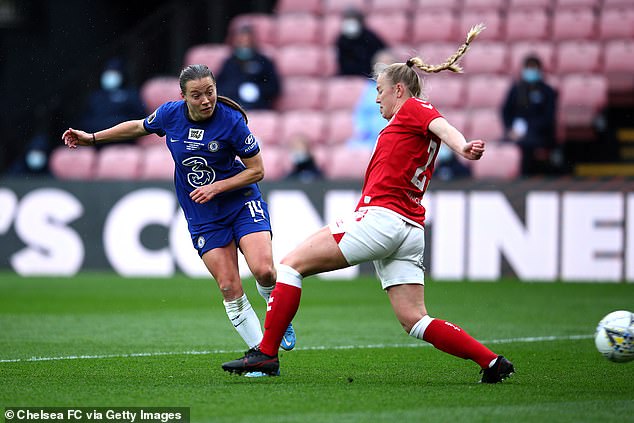 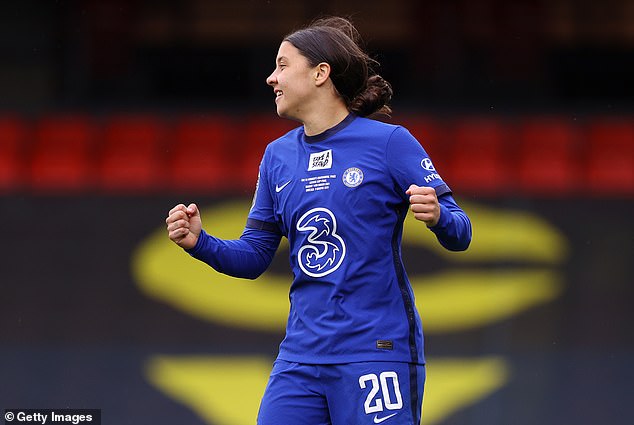 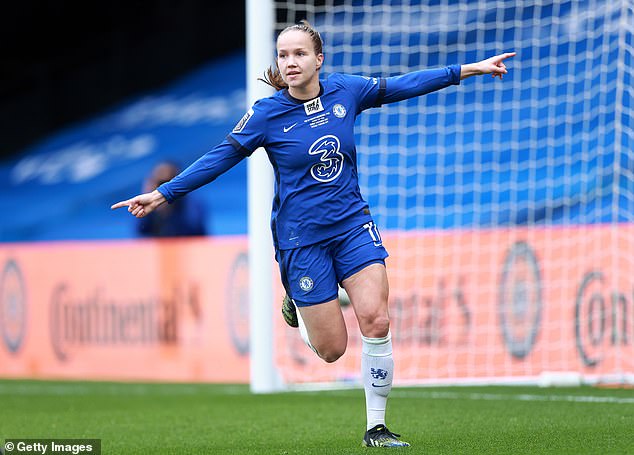 Bristol City’s leading goalscorer Ebony Salmon almost pulled a goal back for the Robins, twice forcing smart saves from Berger who was determined to preserve her clean sheet. Chelsea could have had more too had it not been for some fine saves from Baggaley in the second half.

That record signing Pernille Harder was left on the bench and Beth England was in the stands showed the strength in depth Chelsea have.

The only downside of the day was the injury to Maren Mjelde in the closing stages with the defender needing oxygen as she was stretched off.

Hayes will be hoping it is not as serious as it looked as she and her side continue their hunt for more glory.