Manchester United star Bruno Fernandes was on top form again for Ole Gunnar Solskjaer’s side as he picked up a goal and assist against Leicester with cameras picking up his comments to Marcus Rashford immediately after the forward’s goal. Fernandes has been a revelation at Old Trafford ever since joining from Sporting Lisbon back in January.

The Portugal international played a huge role in helping United finish third in the table last season and he’s carried that form over into this campaign.

Fernandes had nine goals and five assists in just 13 games heading into the match against Leicester on Boxing Day.

His performances have once again been a huge influence on United climbing up the table and a win against Leicester would have seen them jump up to second.

And Fernandes was the architect for United’s first goal of the game with a brilliant touch to feed Rashford midway through the first half. 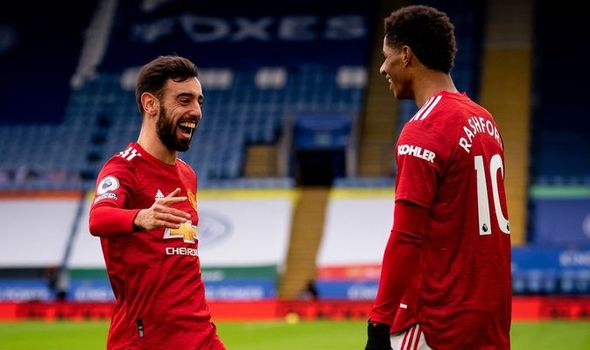 Rashford duly finished past Kasper Schmeichel before running over to the corner flag to celebrate.

The England international was quickly joined by his team-mates to celebrate with Fernandes among one of the first to race over.

And pitchside cameras picked up a gleeful Fernandes clearly admiring his own work.

“Did you see my assist?” Fernandes asked Rashford with a smile as the two embraced.

United’s lead didn’t last long though as Harvey Barnes levelled the game before the break.

Solskjaer’s side looked the likeliest to find the next goal after the restart and Anthony Martial did find the back of the net after being played through one-on-one.

But the offside flag was raised with VAR confirming that the goal was to be ruled out.

United eventually found their second of the game though when Edinson Cavani played through Fernandes who calmly slotted his effort into the far corner. 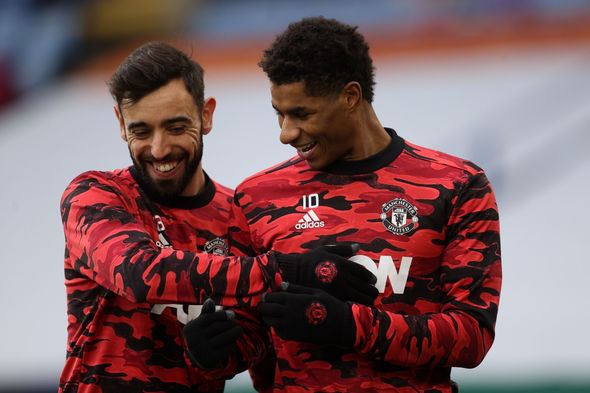 Leicester were pushing for another equaliser late on though and they found a breakthrough once again after Jamie Vardy found himself in some space inside the box to unleash an effort towards goals which deflected in off Axel Tuanzebe.

It meant the two sides had to share the spoils at the final whistle, leaving Chelsea with an opportunity to leapfrog both sides.

United are back in action on Tuesday when they face Wolves before hosting Aston Villa on New Year’s Day.