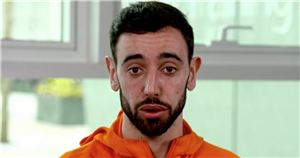 Manchester United ace Bruno Fernandes has launched a passionate defence of his own big-game credentials after being accused of not performing against the Premier League’s ‘top six’ this season.

Fernandes has been United’s standout performer in the 2020/21 campaign, registering 22 goals and 13 assists in 40 appearances for Ole Gunnar Solskjaer’s side.

Yet after the midfielder failed to add to his tally in their 0-0 draw away at Chelsea last weekend, some began to question his influence on games against the Premier League’s so-called ‘Big Six’ – which traditionally includes the Blues, Manchester City, Liverpool, Arsenal and Tottenham as well as United.

Fernandes has only scored one goal in seven outings against the Big Six, which was a penalty in United’s humiliating 6-1 defeat against Tottenham back in October, while failing to record a single assist.

He also lost possession more times than any other player in last Sunday’s stalemate at Stamford Bridge.

However, the 26-year-old has fired back at his critics ahead of United’s Manchester derby showdown with City on Sunday afternoon.

“I don’t know what people mean with top six, because the teams who are in the top six in the table I score and I assist against some of them,” Fernandes told Sky Sports.

“I scored this season against Tottenham, but people say that penalties don’t count. So the game doesn’t finish 6-1 but it finishes 6-0…

“So I know people are waiting and expecting Bruno to score every game and assists every game because when I arrived I was playing really well.

“But sometimes I’m a little bit sad about people who know about football saying so many things I don’t agree [with], talking about the moment when in the past some of them were players.

"They know football is not the moment, it’s not the past and it’s not the future. It’s about all of these: past, moment and future.

“So it’s sad to see some stuff that people are saying about the team, about my team-mates, about me.

"But honestly if the people want to complain about that we don’t score in the big games, we always draw, they can say it’s Bruno who doesn’t play well. For me it’s ok, I can have that pressure on my back.

“And I’m sure in some moments I will score, I will assist, I will perform and I will help my team-mates to win the games.”