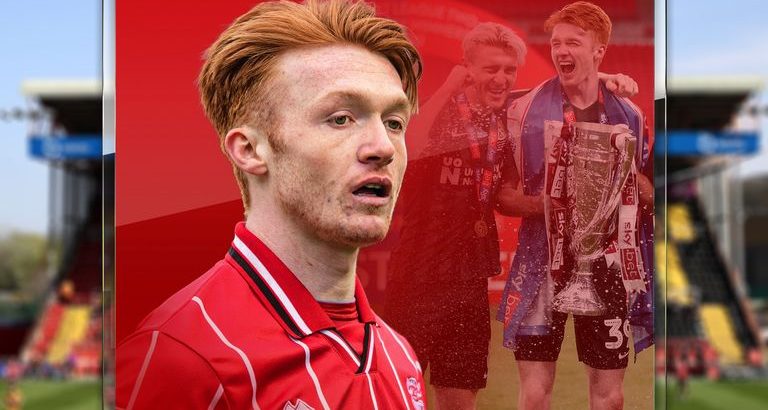 For Callum Morton it has been a stop-start – yet extremely frantic – start to his Football League journey.

Injuries and unfortunate timing have meant the 21-year-old West Brom striker has made just 26 appearances in his league career.

By appearance 29, however, he could well be a play-off hero for the second time to a second club. Which would not be bad going at all.

Morton had previously spent time on loan at Braintree Town in the National League in 2018/19, and then joined Northampton Town in League Two in January of last year.

His loan move started superbly, with five goals in nine games to help hold the Cobblers in the top seven. It would prove vital, because it meant that when football shut down and then started back up a few months later after the season had been curtailed, they would be in the play-offs.

After almost four months of no action due to the first national lockdown – Morton and Northampton were thrust into a play-off semi-final against Cheltenham.

The first leg, at their home of Sixfields, did not go well. They lost 2-0, and no side had ever overturned such a deficit in a fourth tier semi-final. Morton, in just his 11th ever league appearance, scored twice in a 3-0 second-leg win to ensure history was made. 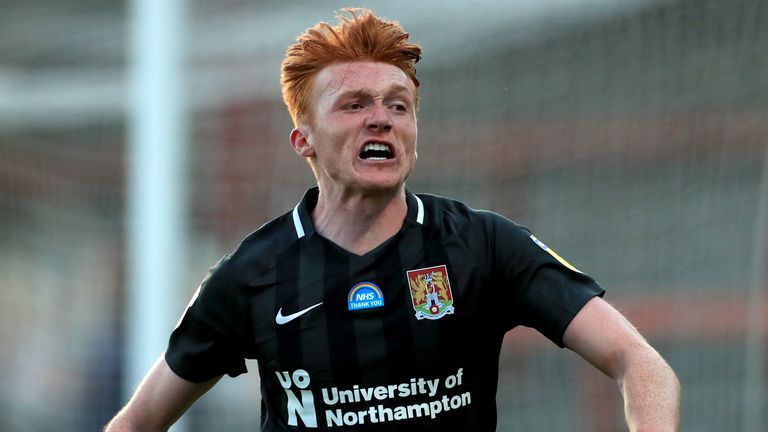 “It was unbelievable,” he tells Sky Sports. “Everyone went there knowing there was a chance. We knew we had thrown away two-goal leads a couple of times that season, and we had 90 minutes to turn it around.

“It took the pressure and nerves off us that we felt in the first leg, and gave us more freedom because we knew at that point we had nothing to lose if we went there and bombarded them. We knew if we lost we would have left it all out there and given it a go, so we would have no regrets.

“The performance was unbelievable. Getting that exposure live on Sky, and all the plaudits that came with it – the Man of the Match award and scoring a couple of goals. It was a night I won’t forget. “

Anyone watching that game at the Jonny-Rocks Stadium that night had the same feeling – that they were watching a star in the making. And Morton didn’t disappoint in the final, either, bagging the second in a 4-0 Wembley romp against Exeter that earned promotion for Northampton.

“It would obviously have been nice having fans, friends and family there, but the fact it was empty took nothing away from being able to play at Wembley, especially at such a young age,” continues Morton.

“People go through their whole careers without getting to play there, and there were older lads at Northampton who hadn’t played there before. To tick that off so early was an unbelievable feeling.” 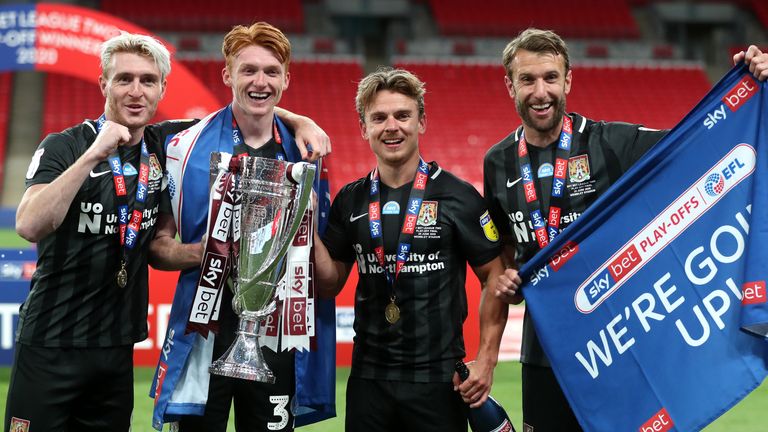 Morton went back to West Brom – who themselves had won promotion to the Premier League – in the summer, and was then sent on loan to Lincoln in League One. It was supposed to be the next step in his journey under Michael Appleton, but after just five appearances a shoulder injury struck – keeping him out for almost six months.

It was a nightmare for a young striker trying to build some momentum.

“I had a few scans and first they said I needed surgery, then they said I didn’t need it after another scan,” Morton remembers. “It was all up in the air, and I went about five weeks of trying to rehab it conservatively, and then I had another setback – so I ended up wasting about six weeks and then getting the surgery anyway. In the end it put me out for nearly six months. “

Morton owes a lot now to the faith of Appleton, who has links himself with West Brom. With the club chasing promotion, and at one stage flirting with automatics, they could have easily gone out in January in search of another striker. But Appleton stuck by his man.

“He was great,” says Morton. “He was happy to wait when he could have just ended my loan in January and got someone else in. That was great for me.”

Eventually, Morton made his return in early March, and marked it with a goal – albeit in a 2-1 defeat to Fleetwood.

Since then he has largely been played as a lone striker – when he was more used to playing in a two at Northampton, which he admits is his preferred position – and has just one more goal to his name so far. But he has helped steer Lincoln into the League One play-offs, and that goal did come against their upcoming opponents in the semi-finals, Sunderland. 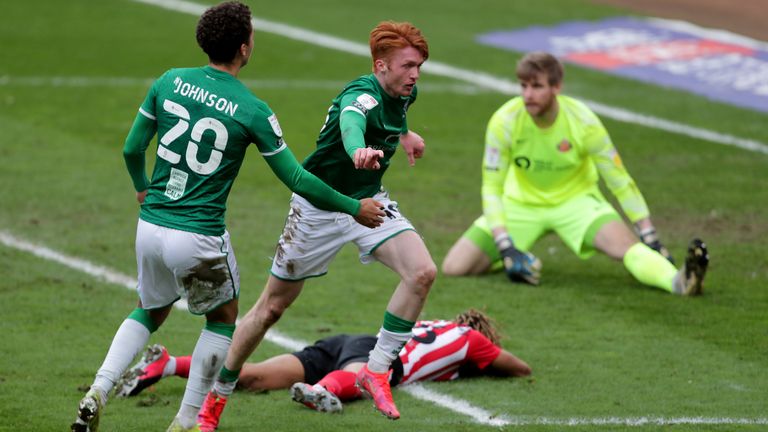 “It has been tough to adapt, and I’ve not been able to show off all my strengths in a sense,” he says. “I still feel I have contributed to the team, but it’s not gone as well as I’d hoped it would so far.

“It has been difficult coming back into the team. It was hard enough going into a side in January like I did in Northampton, it was even harder going into a winning team after an injury and adapting mid-season.

“The injury just halted me. I think even now it’s put me in a position where I’ve had to get back up to speed with playing in a certain way for a different team, and trying to work my way back up to my level.

“I’ve not scored as many goals as I’ve liked, but in this team I’ve played a different role to the one I played at Northampton. There I was the main outlet in terms of running in behind, getting onto flicks-ons and getting into the box. Here I have to be more of a pivot point, bringing others into play and helping the wingers bomb on.

“It has been a different style to adapt to, but that’s why West Brom wanted me to come here – to learn different ways of playing. I think my best role is as an outlet, getting into the box and sniffing out chances to score goals, but it hasn’t quite worked out like that so far at Lincoln.

“When I was young I think I preferred playing on my own up front, but the higher up the leagues you go the more you realise it’s probably easier playing as a two, especially up against three centre-backs at times, as it gives them more to think about, and it allows me more freedom.” 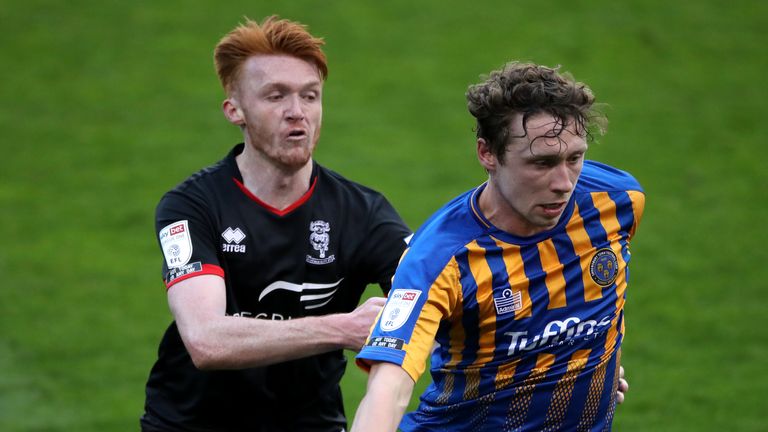 Lincoln face Sunderland over two legs to earn a shot at Wembley and promotion next. Once again it is home, then away, as it was for Morton at Northampton last year.

“After all the injuries and setbacks, if we could end this season in a similar way to last and I can play my part it would be brilliant,” he says. “Every campaign is probably very different. This season we could win the first leg and have that pressure in the second leg. You obviously have to prepare for who you’re playing against and what their style is.

“But personally knowing I’ve done it before does, I think, give me an edge. It will also help having a run of games going into it, which we obviously didn’t have last season.“

Beyond that, it will be interesting to see what the future holds for Morton. With West Brom back in the Championship next season, returning to his parent club would seem the natural next step before seeing what his future holds.

“I’ll have a conversation with West Brom and see where they see me going, but I’ll take it as it comes,” he says of his next move. “I think next season is all about getting 50 games in, and hopefully scoring a decent amount of goals, whatever level that may be in. The next step is getting a full season in and hopefully staying injury-free.

“If you can have one good season and score 20+ goals, it really does give you the platform to show your ability at the next level and people will take notice of you. Whether that works out or not is down to yourself, and the way the team plays that you go to.

“I think everyone’s aspirations have to be playing at the highest level you possibly can. You have to see where your ability, willingness and hard work can take you.”

For now Morton’s hard work has taken him back to the play-offs. It will be tough for him to top the impact he had last season, but if he gets anywhere near it then you can certainly expect some fireworks.