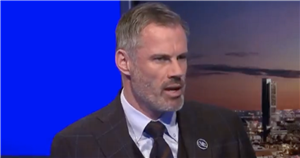 Jamie Carragher lashed out at “lazy punditry” from fellow Liverpool legend Graeme Souness on Monday evening after the protests at Old Trafford.

Manchester United fans stormed their home ground ahead of the clash with Liverpool on Sunday afternoon to protest against the owners of the club, the Glazers.

The botched European Super League attempt resurfaced the discontent from United supporters towards the Glazer regime, which also prompted the breakaway club FC United of Manchester in 2005, and the still seen Green and Gold movement in 2010.

Speaking on Sky Sports though, Graeme Souness drew criticism for suggesting the protest was more about United's recent on-field struggles.

"I think it’s born out of United not being top dogs as much as what happened last week," Souness said. "It’s only since Fergie stopped that the success has stopped and I think that irritates supporters and they have become the focus of their anger. I think it’s slightly misdirected.”

However, Carragher pointed out on Monday Night Football that the motives of the United supporters had nothing to do with their latest collection of silverware, pointing to those movements that happened while Sir Alex Ferguson was still in charge.

"I really want to get this message across. This is not the European Super League for me,” Carragher said on Sky Sports.

“When we had the six clubs, we spoke about this a couple of weeks ago, the supporters who really felt this more and marched on stadiums are Manchester United and Arsenal – that's because they had a huge problem with their owners before this.

"This was the tipping point. Other supporters are very angry with their owners, but don't necessarily want them out. I think it's different for these two clubs, because of that.

"I think we have got to get away from that (the ESL). I've listened to a lot this morning and I watched other things.

“I’ve got no problem with people having a different point of view or a different opinion from me, because it's nuanced what happened yesterday. But get the facts. Please, when you are going to talk about this, know what's going on.

"This talk of Manchester United fans only doing this because they are not challenging for the top honours… Supporters formed another club – FC United. That was at the height of this when it started.

"The green and gold campaign was in 2010, I think, when David Beckham came back to the club. The year before that, they were in the Champions League final.

“The year after they were in the Champions League final. So let's not… lazy punditry. That's what I call it.”