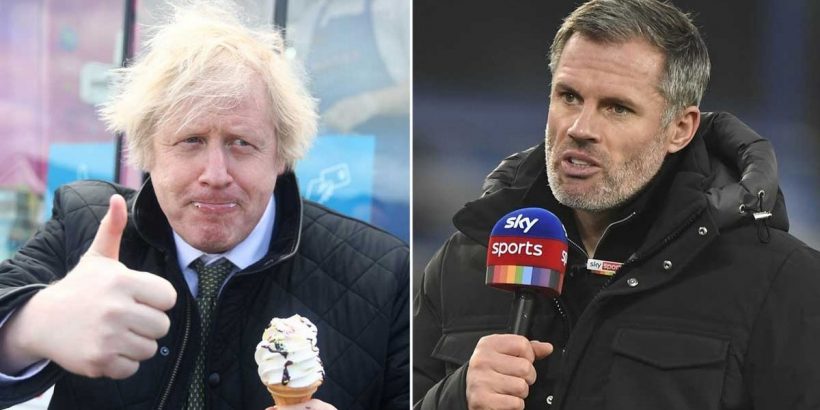 Jamie Carragher has taken aim at Boris Johnson after the Prime Minister spoke out against the controversial European Super League.

The clubs released a joint statement on Sunday in which they insisted that the proposal would be good for the game, but that suggestion has largely been met with disdain from supporters of all clubs, including those involved.

Amid suggestions that the clubs were acting out of greed, Johnson was asked about the plans on a campaign visit to Gloucestershire on Monday.

He told reporters: "I don't like the look of these proposals.

"We are going to look at everything that we can do with the football authorities to make sure that this doesn't go ahead in the way that it's currently being proposed.

Johnson added that big football clubs are more than just "great global brands", saying: "They're also clubs that have originated historically from their towns, from their cities, from their local communities. They should have a link with those fans, and with the fan base in their community.

"So it is very, very important that that continues to be the case.

"I don't like the look of these proposals, and we'll be consulting about what we can do."

Carragher didn't like seeing Johnson involve himself in football though, and quote tweeting The Mirror's story he wrote: "Stay out of this you charlatan @BorisJohnson your mates are giving their mates billion pound contracts!

Johnson was editor of the Spectator magazine when an article he published in 2004 blamed the Hillsborough disaster on "drunken fans", and claimed that the city of Liverpool was "hooked on grief" and wallowed in a victim status.