There was no standing ovation from 60,000 fans. The obligatory lap of honour with the kids on the pitch was conspicuous by its absence.

During normal times a legend leaves the scene and there’s barely a dry eye in the house.

While Scotland prepares for a relaxation of covid restrictions on Monday, however, the nation isn’t quite there yet. 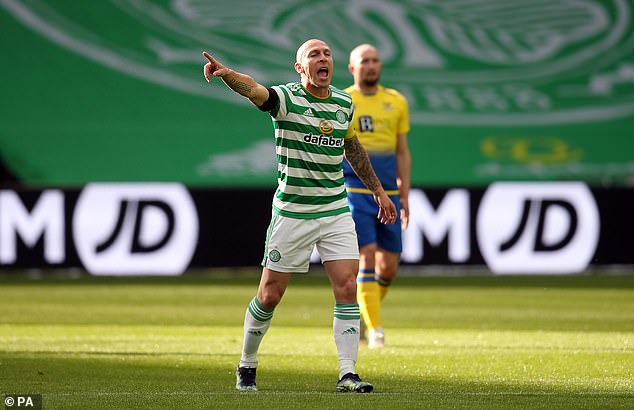 So it was, then, that after 14 silver-laden years Scott Brown’s final home game as Celtic captain reflected a strange old season.

After 63 minutes he trotted to the side of the pitch, a grin splitting his face, to make way for Ismael Soro. The applause of supporters were restricted to front rooms and sofas. After ten league titles and 12 domestic trophies it felt like an unsatisfactory way to bring down the curtain.

Celtic tried their best to make it a special night. The players took to the pitch with ‘Brown 8’ on the back of their tracksuit zippers. There was a presentation to the captain from outgoing Chief Executive Peter Lawwell on the pitch before kick-off. They gave him the man of the match award when, in truth, he was no such thing.

As is their wont, the Green Brigade ultras tried to turn the attention to themselves. In their usual Section 118, a huge number eight was draped over the seats with Brown’s name above. Gone – at the explicit instruction of the club – was a display of Palestinian flags sneaked in at the same time.

Brown is unlikely to be the only departure this summer.Three of Celtic’s four goals came from Odsonne Edouard, Kris Ajer and Karamoko Dembele and all three are expected to leave this summer. 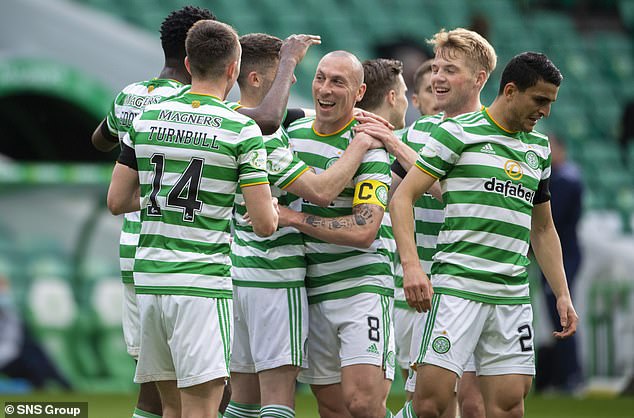 A huge close season of turnover is likely to start with the appointment of a new manager.

No longer a matter of Howe, the arrival of former Bournemouth manager Eddie in Glasgow is widely regarded as a matter of when. New Chief Executive Dominic McKay will hold his first talks with supporters’ groups today and one question will dominate the agenda. What now for Celtic?

On Sunday the Perth side defied the loss of two players to positive coronavirus tests – plus two more through track and trace – to secure a meeting with Hibs at Hampden a week on Saturday.

Callum Davidson closed down the club training ground in a quest to prevent the outbreak spreading. 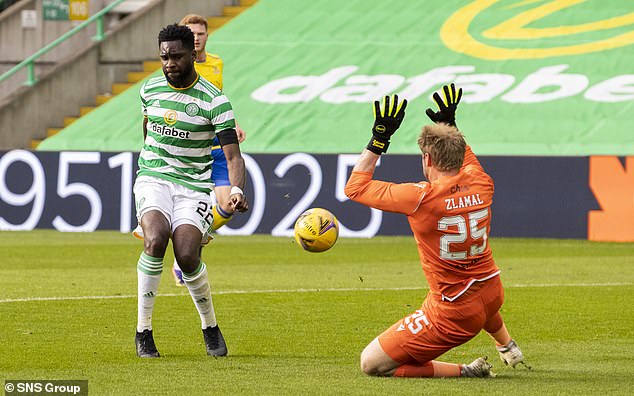 Aiming to become the first team out with the Old Firm to win two trophies in one season since Aberdeen in 1989/90 St Johnstone’s preparations have become an anxious affair. Vaccines or no vaccines, covid-19 still has the capacity for chaos.

Prone to an erratic moment, his latest 23 minutes arrived 23 minutes his St Johnstone debut and teed up two Celtic goals in a minute.

The first was a bizarre affair, the flustered earning a yellow card for picking up a passback in his own area to gift the home team an indirect free-kick 16 yards out. 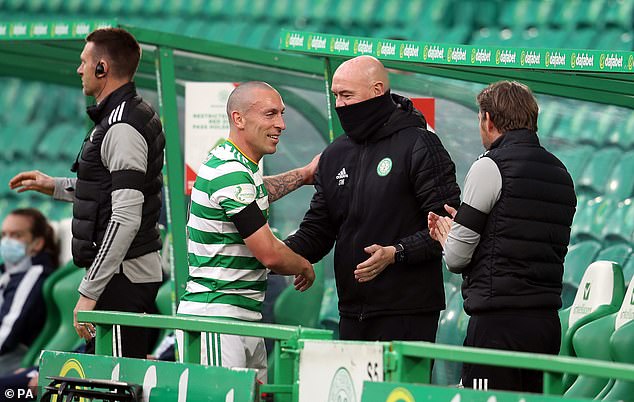 Ryan Christie tapped the ball to David Turnbull and the midfielder enhanced his late claim for a place in Steve Clarke’s Euro 2020 squad next Wednesday by lashing a fizzing low effort into the net to make it double figures for the season.

The home side doubled their lead immediately. Brown marked his final home game with an assist when he sent a raking diagonal high ball towards Odsonne Edouard.

Semi-engaged these days, the Leicester City-bound Frenchman is still capable of moments of genius.

He produced another when he killed the ball with one touch, nutmegged Shaun Rooney and cut inside to dink a delightful finish over Zlamal for 2-0 and his 22nd goal of the season. Celtic can only wonder how many he might have scored had he been playing at full pelt.

The goals knocked the stuffing out of St Johnstone after a high tempo start. The opening goalscoring in Sunday’s cup semi-final win over St Mirren striker Chris Kane had two opportunities. The first saw him fail to make contact at the back post after James Brown flicked on a Glenn Middleton cross.

The second reminded Celtic supporters of a rare and precious sight; a Vasilis Barkas save.

Back in the starting eleven after a Scott Bain finger injury the Greek international stretched high to prevent kane lobbing the ball into the net after a wayward Jonjoe Kenny back pass. 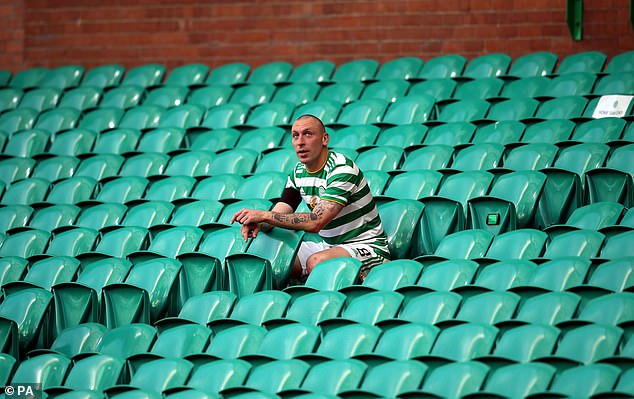 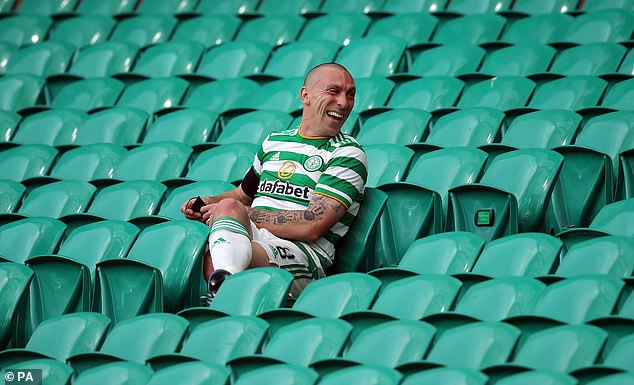 Celtic could have put the game out of sight either side of half-time when Zlamal redeemed himself for the first goal with smart saves from Edouard and Ryan Christie.

Had Brown gifted St Johnstone a way back into the match it might have taken the sheen off the captain’s night. Dispossessed by Craig Bryson 30 yards from his own goal, Glenn Middleton’s effort was blocked, the ball breaking to Craig Conway before a timely block by young left back Adam Montgomery on the line.

The youngster’s promising debut ended after 63 minutes. Also leaving the pitch, huge grin on face, was Brown. A lengthy hug from interm boss John Kennedy the only concession to sentimentality.

Celtic’s third goal finally came with eleven minutes to play. Substitute Mikey Johnston laid the ball off to Ajer, a heavily deflected sidefooted shot spinning up off the boot of Gilmour and over Zlamal for 3-0. The fourth brought a first senior goal four minutes from time after an angle finish for late substitute Karamoko Dembele.

If the whispers are true the scorers of the second, third and fourth Celtic goals are keen to follow Scott Brown out the Parkhead exit. It’s doubtful their loss will be felt as keenly as that of the captain. 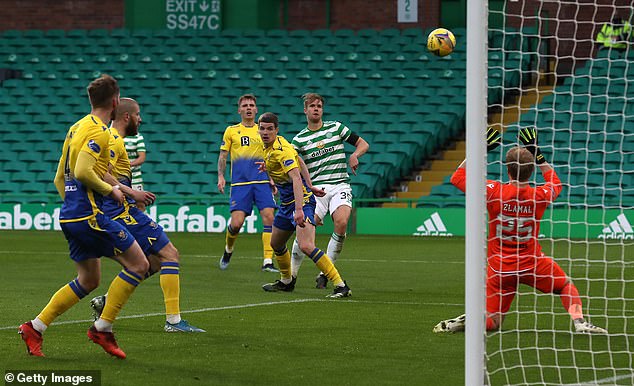