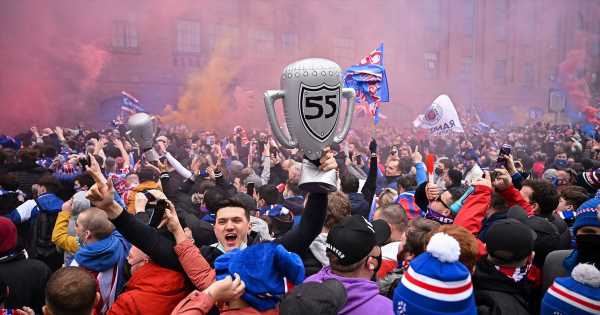 Celtic and Rangers’ Old Firm showdown is reportedly at ‘very real’ risk of being scrapped next weekend due to police concerns over fans breaking lockdown restrictions.

Gers are set to head to the home of their arch-rivals as newly-crowned champions of Scotland, with Celtic’s 0-0 draw away at Dundee last Sunday confirming their first title for 10 years.

To celebrate their long-awaited triumph, the Ibrox faithful defied lockdown rules and gathered outside the stadium to celebrate before their side claimed a 3-0 win over St. Mirren on Saturday.

Scotland First Minister Nicola Sturgeon has criticised the supporters in question and accused Rangers of not doing enough to stop the gatherings from happening.

And according to The Sun, Gers’ scheduled Old Firm trip to Celtic on Sunday 21 March is now at risk of being called off amid police fears of both sets of fans swarming outside the stadium in the same fashion.

Force insiders claim there is a ‘very real possibility’ of the match being scrapped, with the Scottish Police Federation demanding assurances from both clubs.

Officers have also been warned of the ‘increased risks’ following last weekend’s chaotic scenes at Ibrox.

A source is quoted as saying: “There have already been indications some supporters plan to gather at Parkhead on March 21. What officers had to deal with at the weekend was bad enough, without adding in rivalry and the potential for violence.

“Calling the game off is a very real possibility.”

Earlier this week, Sturgeon told Holyrood: “The behaviour witnessed at the weekend was disgraceful and selfish.

“In terms of future fixtures, there are a variety of discussions happening over the course of this week, including one between myself and the chief constable.

“We will report back on those in due course and certainly before the scheduled Old Firm match on March 21.

“The reason we’ve tried to keep football and elite sport, generally, going is not for the benefit really of the elite sports people but for the fans."

READ MORE:Steven Gerrard will “definitely” be Liverpool’s next manager after Jurgen Klopp