Celtic’s Europa League hopes took another bruising in a 2-0 defeat by RB Leipzig at the Red Bull Arena.

A makeshift Hoops side shorn of several top stars made an encouraging start to the Group B match but were punished for defensive lapses, first on the half-hour mark by striker Matheus Cunha and again minutes later by attacker Bruma before the home side cruised their way through the second half.

Brendan Rodgers’ men lost 3-1 to Salzburg in their previous European fixture and the Austrian side top the section with full points after their win over bottom side Rosenborg.

Celtic have three points from nine and host Leipzig, who have six points, next month but first face a crucial Betfred Cup semi-final against Hearts at Murrayfield on Sunday.

It was always going to be tough for the Scottish champions, who had not previously won away from home in 13 Europa League group games and never in Germany. 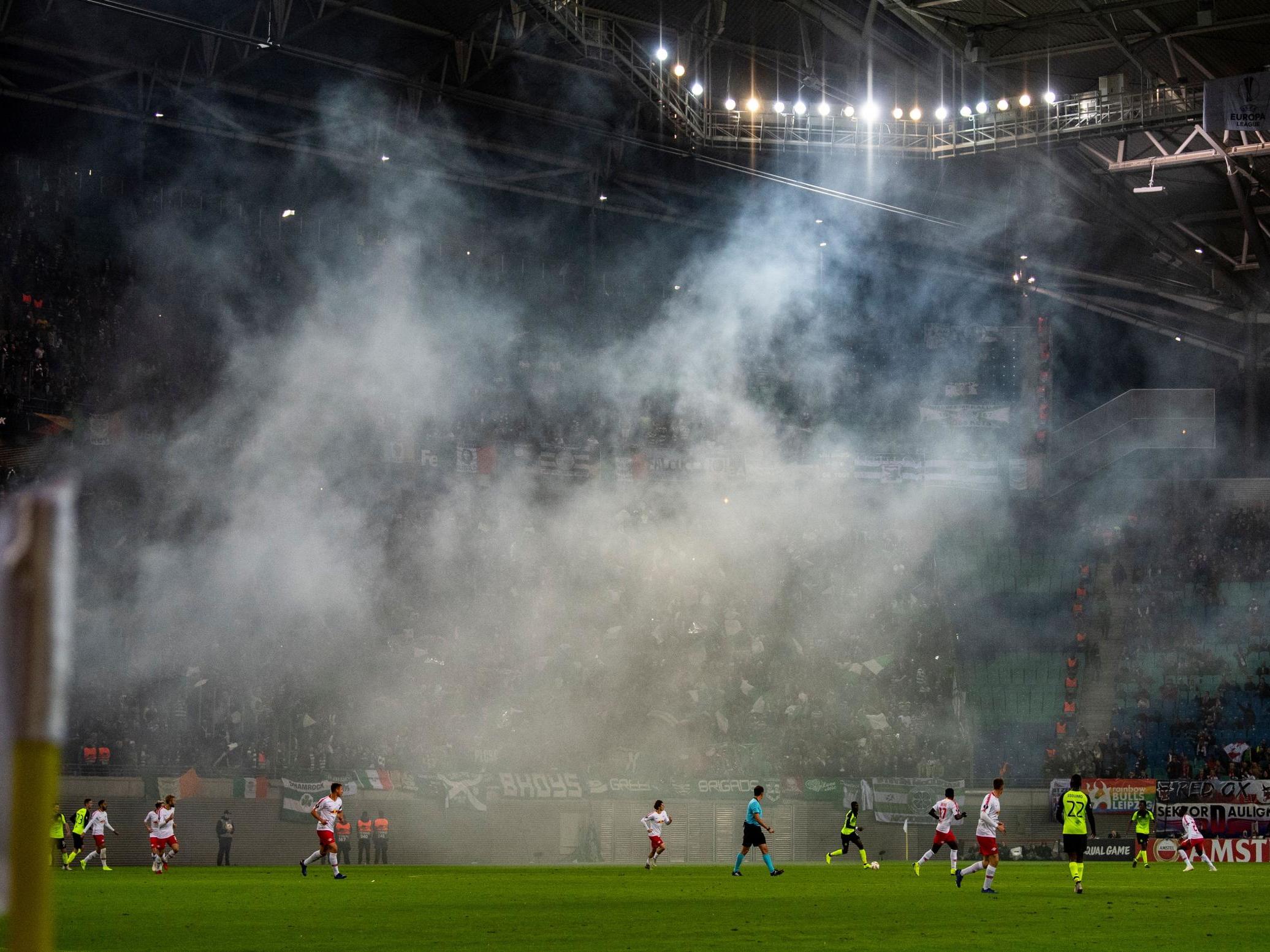 Hampered by the absence of Tom Rogic, James Forrest, Scott Brown, Leigh Griffiths, Kristoffer Ajer and Youssouf Mulumbu through injury or suspension – and Filip Benkovic was fit only for the bench – Rodgers made five changes to the side that beat Hibernian 4-2 at the weekend.

Leipzig coach Ralf Rangnick made eight changes from the weekend Bundesliga draw away to Augsburg with only captain Willi Orban, Slovenia midfielder Kevin Kampl and France Under-21 striker Jean-Kevin Augustin keeping their places.

A tannoy plea to the 5,000 or so Celtic fans to stop their pyrotechnics display came before kick-off, which saw the visitors having to defend three early corners.

However, it was Celtic who first came close to opening the scoring on a swift break, where Morgan picked out striker Odsonne Edouard who screwed a shot from 12 yards inches wide of the far post.

Celtic slowly grew in confidence but were made to pay the price for poor defending with half an hour played. 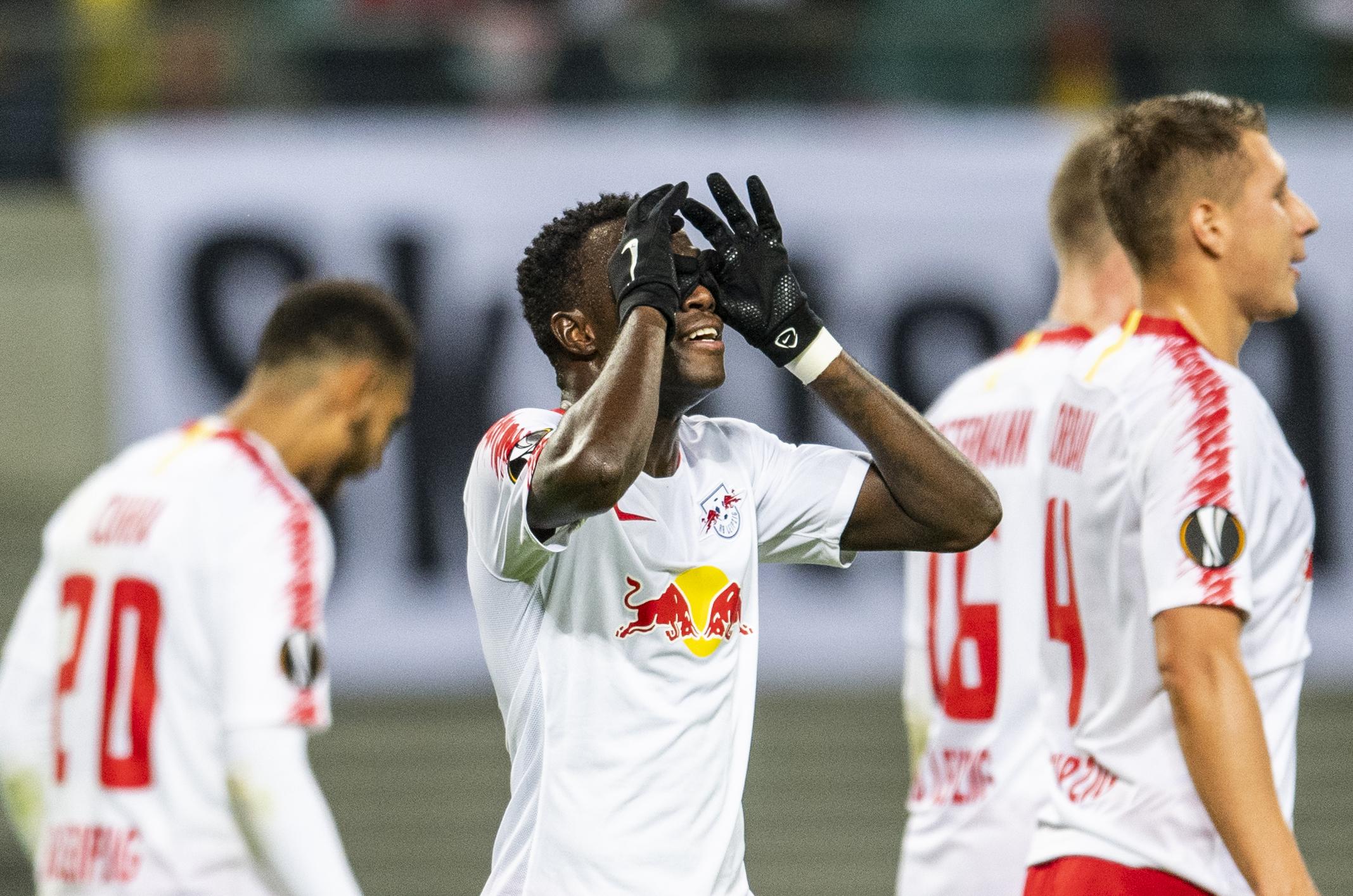 When Kouassi and defender Dedryck Boyata both missed a straightforward cross into the box by Marcel Sabitzer, Cunha gleefully drove past Craig Gordon from 12 yards.

Four minutes later the Parkhead keeper was picking the ball out of the net again, this time when his defence failed to deal with a Marcelo Saracchi cross, with Portugal international Bruma, who had scored against Gordon in the 3-1 friendly win over Scotland earlier in the month, rifling in from 14 yards.

Right-back Mikael Lustig replaced the injured Gamboa for the start of the second half, which began with Kampl firing wide from a Sabitzer delivery before midfielder Konrad Laimer missed the target from inside the box with only Gordon to beat.

In the 64th minute another mistake by Boyata in needlessly conceding possession to Cunha ended with Gordon touching Augustin’s drive from 18 yards on to the post.

There was further collateral damage to Celtic in the 73rd minute as Simunovic picked up an injury and had to be replaced by Jack Hendry, before Leipzig keeper Yvon Mvogo blocked a shot from Olivier Ntcham with his foot to deny the Hoops midfielder a goal that might have made the final minutes more tense.

However, in the final analysis, the Glasgow giants now have it all to do if they hope to qualify out of their section.